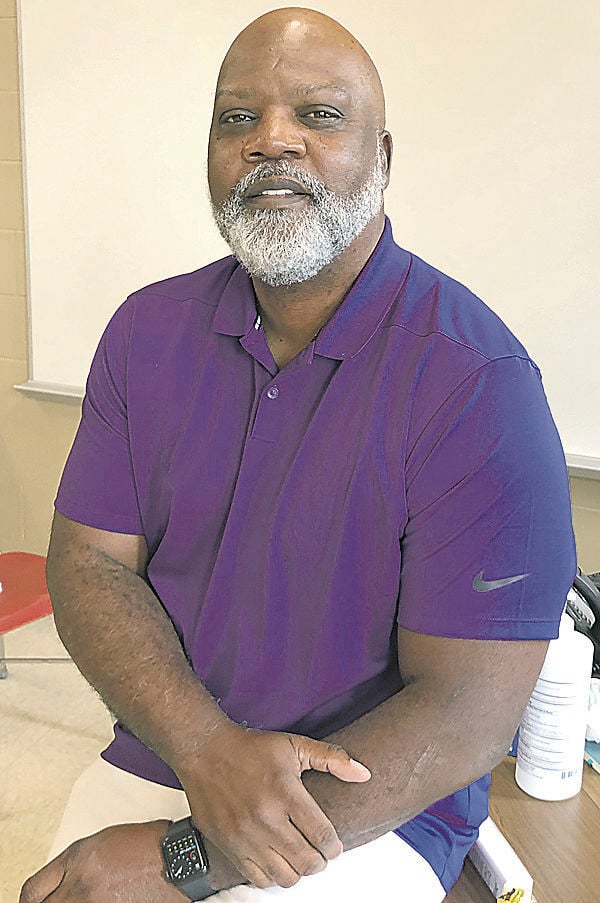 Barry Upshaw has taken a teaching position at Fruzen. 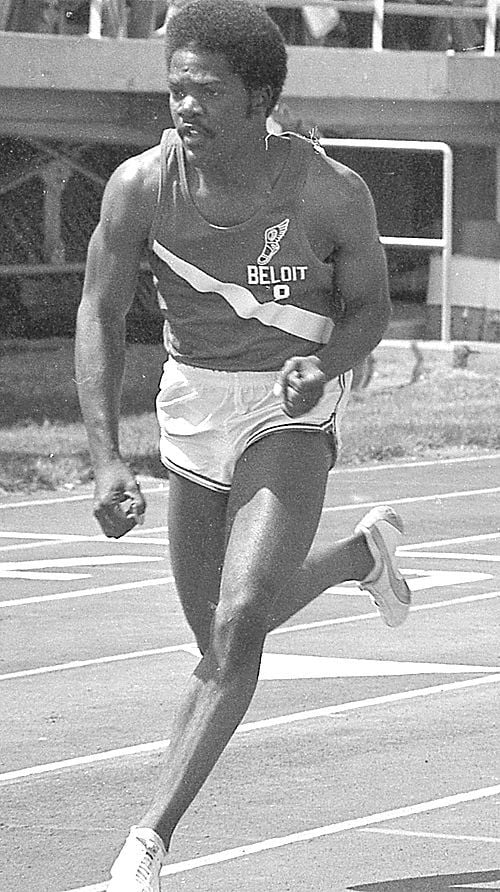 Barry Upshaw starred in football, basketball and track and field at Beloit Memorial. His induction into the Beloit Historical Society Elliott-Perring Sports Hall of Fame was delayed a year by the COVID-19 pandemic.

Barry Upshaw has taken a teaching position at Fruzen.

Barry Upshaw starred in football, basketball and track and field at Beloit Memorial. His induction into the Beloit Historical Society Elliott-Perring Sports Hall of Fame was delayed a year by the COVID-19 pandemic.

BELOIT—Barry Upshaw was a standout in three sports at Beloit Memorial High School in the early 1980s and while a pandemic delayed it until next year, he will be inducted into the Beloit Historical Society’s Elliott-Perring Sports Hall of Fame.

A remarkable success story as a Purple Knight athletically, he was a failure academically.

And for that, he blames no one but himself.

“I graduated from Beloit Memorial (in 1981) with a 1.8 grade point average,” he said. “I was never a dumb kid. I just didn’t care enough to know and I didn’t know enough to care. I did not put the work in. I let myself down.”

Upshaw paid the price when Division I colleges expressed interest in the speedy All-State defensive back only to walk away when they saw his grades.

“I had a scout from Notre Dame say he loved me on film and they’d love to get me out to South Bend,” Upshaw said. “Then he looked up my transcript. I never heard from again. He wasn’t alone.”

When a year at the University of Northern Iowa, then a Division II school, was disappointing in terms of his playing time, he transferred and had two enjoyable seasons of junior college ball. More important, his development as a student improved exponentially. He went on to graduate from the University of Minnesota with a Master’s degree.

“I considered walking on at Minnesota, but football really wasn’t that fun for me anymore,” he said. “I had a lot of catching up to do academically, too.”

Upshaw went on to teach in Arizona for 19 years. He has been married for 32 and also had a 27-year stint in the Army National Guard. Now 58, he embarks on a new journey as a seventh grade English teacher at Fruzen Intermediate School in Beloit.

Upshaw said he convinced his wife, who is from Phoenix, to return with him to where he grew up so he could help his sister Doris care for his elderly father. The bonus is being able to help Beloit.

“I truly like Beloit and I’m excited to be back,” he said. “I like the idea of giving back to the city that shaped and molded me. It’s a noble idea. There are so many successful people that I personally know who moved away and are interjecting life into the communities where they now live. But they left a void here. That’s one of the reasons I came back. It’s unfair for a community to have to keep replacing its most important asset, its people.”

Upshaw said educators are as important as ever these days.

“I don’t think people are being taught to be critical thinkers,” he said. “Our job is to educate, not indoctrinate.”

Upshaw returns to Beloit when racial tension and civil unrest are at high levels in nearby Kenosha. He is no stranger to racism. He was born in Mississippi and has memories of a town’s black and white population separated by railroad tracks.

Upshaw moved to Beloit in the third grade and while racism here was more subtle, it clearly existed. He knew teammates and coaches who he believed were racists and he simply tried to avoid them.

“My mother and my father, even though they were from Mississippi, never told me to dislike white people,” he said. “I had a favorite teacher at Aldrich, a white lady, who was like a mother to me. She is one of the reasons I became a teacher. She treated me like a person.”

Upshaw said he was glad to see members of the Milwaukee Bucks boycott a playoff game Wednesday to put a bright light on inequality and injustice.

“A stand needs to be taken,” he said. “When I see situations that transform in front of me, I address them. One of my favorite quotes is ‘you can impress from afar, but you can only impact up close.’ It can be as much as a courageous conversation with a person with a divergent opinion.”

Upshaw said as a Black father, he faced dilemmas whites do not.

“When my son Christian was born, I was afraid for him,” he said. “So I wrestled with the idea of teaching him to be respectful or to be a bully who could stand up to the things he’d face. He was a big kid and he’s 6-3, 270 now. I think he was in the fourth grade and came home late. He heard a new kid at school was going to be jumped when he got off his bus. My son got off at the kid’s stop, walked him right up to his door and then walked all the way home. I hugged him and right then I knew my son needed to be righteous, not a bully.

“What I did have with him later was what they call ‘The Talk.’ I told him if you get pulled over by the police keep both hands on the wheel and do what you’re told. Do white parents have that same talk? It’s sad that it is still necessary, but it is.”

Upshaw said he has already spoken to BMHS head football coach Ken DuBose about possibly helping out the program, but he also may look into refereeing. High school officials are a hot commodity these days.

“I haven’t made up my mind yet,” he said. “I coached in Arizona and I was really disappointed with the commitment by the kids out there. What I would definitely be interested in is getting involved with a summer baseball program. I’ve already spoken to an old teammate of mine, Scott Davidson, about possibly doing that. I ran track in high school, but I loved baseball. I always played it in the summer.”