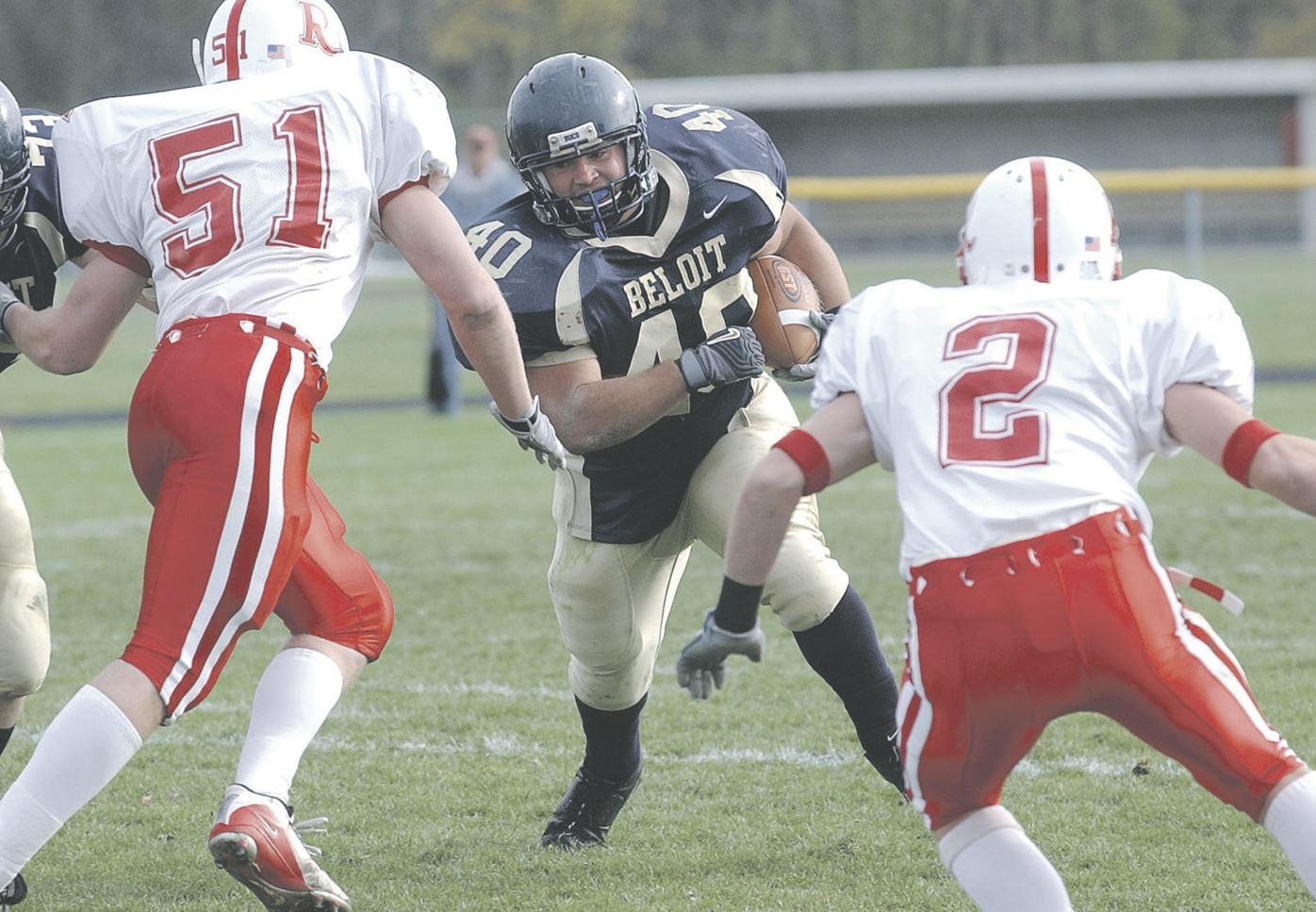 After a stellar career at BMHS, Jon Dupuis (40) bounced off defenders for Beloit College. 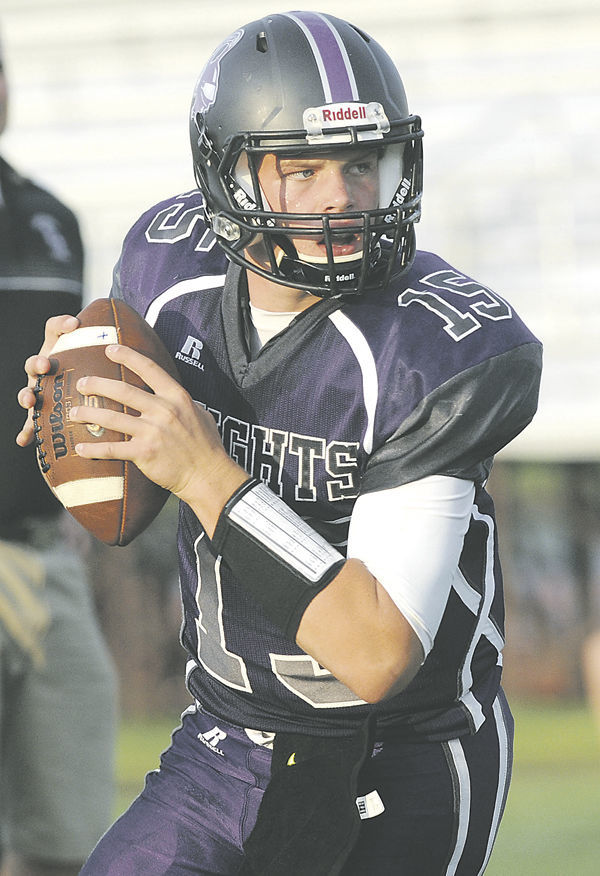 QB Steve Makinen, currently at UW-Oshkosh, was an exceptional leader with a fine arm for the Knights.

After a stellar career at BMHS, Jon Dupuis (40) bounced off defenders for Beloit College.

QB Steve Makinen, currently at UW-Oshkosh, was an exceptional leader with a fine arm for the Knights.

BELOIT—In case you missed it, Tuesday’s edition included a list of the top 11 Beloit Memorial High School defensive players I’ve seen while covering the Purple Knights on a regular basis since 1980.

Today it’s the offense’s turn. The rules are simple. I must have seen the player in action and I’m picking 11 players, not strictly by position. Considering the run-heavy decades of offensive football, don’t expect to see many wide receivers. (OK, none).

When the Knights were at their best, contending for Big Eight championships and playoff appearances in the 1980s and 1990s they were a ground and pound attack blessed with outstanding running backs. Some of the players who aren’t making this list were All-Big Eight First Teamers and two are among my favorite players ever.

Heading the team is the same guy who was No. 1 on defense, Darius Jones (1997-99). In 1999 he was not only the Big Eight’s Offensive Back of the Year, he was also its Linebacker of the Year.

Jones finished his career with 2,606 yards in total offense and is the all-time rushing leader with 2,445 yards on 356 carries. He scored 25 touchdowns and 164 points.

• The running back stable includes Jon Dupuis (1996-97), who was simply a human wrecking ball. John Heineke called him his “search and destroy fullback.” Dupuis rushed for 1,932 yards for his career for No. 2 on the all-time list, earning All-State honors in 1997.

• Like Jenkins, Jeff Stovall (1990-91) was fast and powerful runner and rushed for 1,086 yards as a senior. The Player of the Year in the Big Eight, Stovall was also First Team All-State. He scored 17 TDs and 104 points for the 8-2 Knights, then went on to a distinguished career at Northern Iowa.

• Tim Wofford (1980-81) was the “Lightning” to Fred Lockhart’s “Thunder” on the 7-2 1980 Big Eight champions. Injuries held his numbers down a bit, but Wofford was a terrific runner with breakaway speed who had 1,579 career yards rushing. He went on to play receiver at Western Illinois and only injuries prevented him from an NFL career.

I drew the line for running backs at five which left off two favorites: Jim Boatner (1990-92) and Jeremy Kelsey (1992-93). Boatner didn’t fit the fullback profile Heineke loved, but he had to rework his offense for the elusive speedster who gained 1,526 yards in 1992 and 1,883 for his career. Kelsey was a power back and a gutsy three-sport athlete who was a slugger in baseball and a starting goalie in hockey. He rushed for 1.338 yards in 1993.

Lewis helped the 1980 team rush for 1,993 yards and showed his athleticism by being one of the school’s all-time best shot put and discus throwers. Niedfeldt (1986-87) was a two-time All-Big Eight and All-Area tackle at 6-1 and 250 pounds.

“Mountain” McKinley (1992-93) was 6-3 and 251 as an All-Big Eight lineman his senior year, but he grew a tad larger as a starter at Mississippi Valley State. He earned honorable mention to the WFCA All-State team.

Terwilliger earned First Team All-Big Eight as a senior and his blocking helped fullback Darius Morrow land on the First Team. Terwilliger was just the kind of blocker Beloit College’s Ed DeGeorge loved to see in his Wing-T.

• As far as picking quarterbacks, the Knights of old never were really looking for Joe Namath. Heineke’s successor as head coach, Mark Anderson, once said, “Gauging a quarterback by the number of yards or touchdowns he’s passed for isn’t right. The measure of a quarterback is leadership.”

The Knights had plenty of strong and resourceful leaders at the position and one, Matt Mabie (1980), even successfully walked on at Wisconsin. For this list, I’ll take Steve Makinen (2014-16.)I wish the UW-Oshkosh recruit had the opportunity to play with, say, the 1999 bunch. He gets my vote after throwing for over 3,000 yards and 26 touchdowns during his career. His coach, Rodney Wedig, considers him one of the best players he’s coached, saying “He was a very tough young man that brought stable leadership to the program.”

Yikes, that’s 11. A couple of bonus picks could be a kicker and return man. As for kicker, I think Jon Gutierrez had the biggest leg and kicked five field goals, but Chris Burt and David McCrea were also both All-Big Eight and contributed some clutch kicks.

For a return specialist I’ll go with Michael Lewis (1995-96), a University of Kansas recruit who would have made this list at running back if he hadn’t injured his knee the first half of the 1996 season opener against LaFollette. He already had 154 yards on 13 carries by that time. Great vision, great balance and great speed described Lewis, who as a junior had a 71-yard punt return and kickoff returns of 80 and 91 yards.

To all the terrific Knights out there I didn’t pick, well, when this is all over let’s have a beer and you can explain to me why I’m such an idiot.