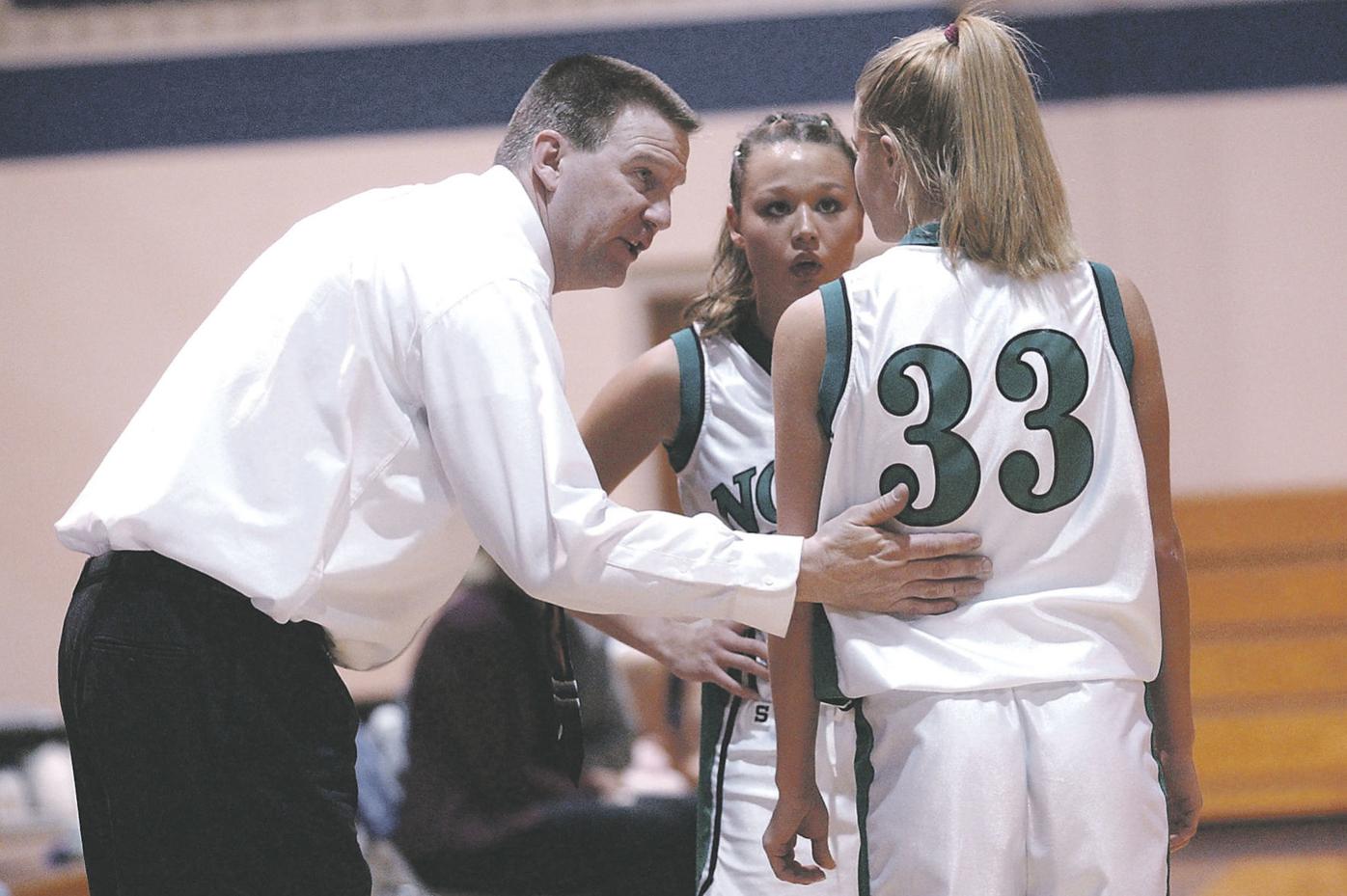 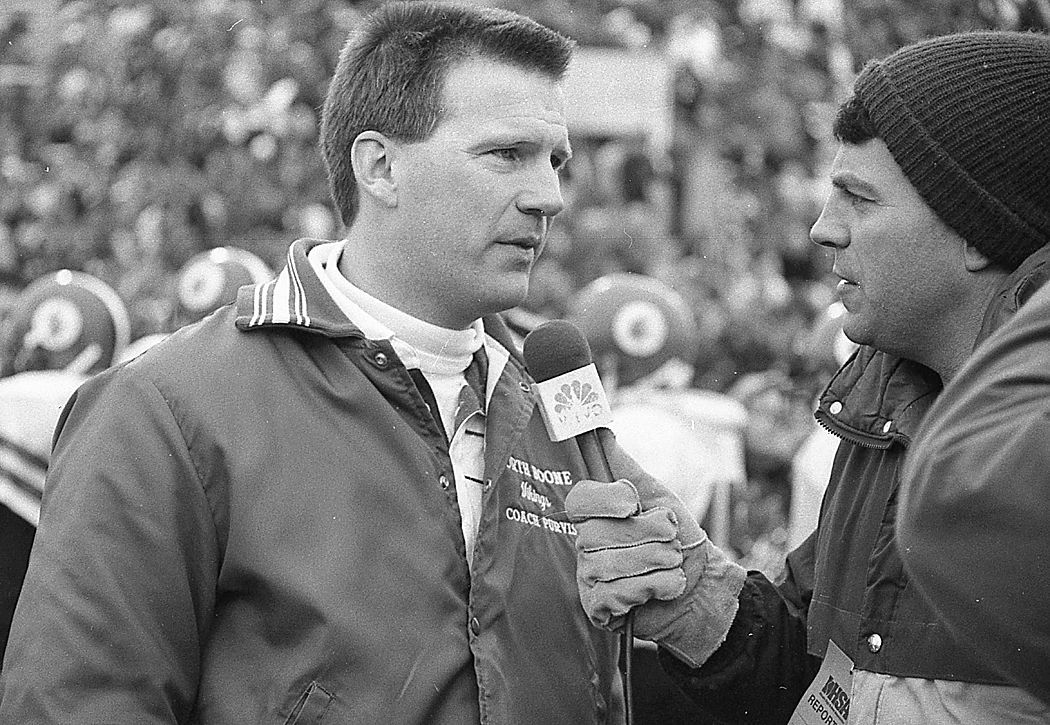 Dale Purvis was interviewed after leading North Boone to second place in the IHSA Class 1A football playoffs.

Dale Purvis was interviewed after leading North Boone to second place in the IHSA Class 1A football playoffs.

CAPRON, Ill.—While he may only be a few days into his retirement from North Boone High School, Dale Purvis has already started to reflect on his long career as an educator, coach and administrator.

You could even add student-athlete to that list. A star basketball player, he graduated from North Boone in 1978.

Purvis enjoyed a Midas touch as a coach, quickly turning each program he led into a success. In fact, he’s the only coach in the Stateline to ever be named the Beloit Daily News All-Area Coach of the Year in three sports: boys basketball, girls basketball and football.

“We had a very good run of kids,” Purvis said. “They were dedicated and many were very talented. I feel fortunate because I could push those kids and they bought in. That’s why we were so successful. We outworked people. Some kids want to win, but they don’t want to put in the effort.

Purvis spent 27 years at North Boone, the past 16 as athletic director. When he was also promoted to assistant principal in 2012, he ended his coaching career. During his tenure as AD, the Vikings made the transition to the highly competitive Big Northern Conference in 2006.

There’s all sorts of success in his own coaching career, but he said three achievements stand out to him.

He took over a football program in 1991 that had gone 6-4 the previous season under Bill Ellingson, but its previous winning season had been 1983. The Vikings were 9-1 the first season under Purvis, qualifying for the playoffs.

They set their sights even higher the next year.

“When I took over the program we had one kid who could lift 200 pounds,” Purvis said. “The first thing I did was install a weight program and we hit it hard during that school year. By spring we went to a weight-lifting competition at Ashton-Franklin Center and we had six kids benching 300.

“That next fall our goal was to be eating turkey in Bloomington in November. That’s what we did.”

The Vikings had the best quarterback in the Stateline in Scott Klicko, a top running back in John Barker and a top defender in Brian Morelock.

The Vikings finished 13-1. They breezed through their Upstate Illini-North schedule, outscoring opponents 395-34 and posting six shutouts. Victories over Stockton (33-8), Orangeville (15-0), Manlius (15-12) and Kewanee Wethersfield (28-8) followed in the IHSA 1A playoffs.

In the finals at Illinois State, the Vikings led Hardin Calhoun 11-7 at halftime, but were blanked in the second half and fell 28-11.

“There was a parade of cars two miles long waiting to welcome us home,” Purvis said. “It was just tremendous fan support. A few years before that football was really down at North Boone. I think the fans realized how hard those kids worked to change that.”

Purvis and his wife Lorna have three sons (Wes, Jeremy and Bret) and a daughter (Lauren) and it’s no coincidence they all played sports. Their son Jeremy was a senior in 2001 when the school accomplished a goal his father had since he was bouncing a basketball for the Vikings.

“I always wanted North Boone to win a regional title,” he said. “When Jeremy was a senior that group finally did it. That was a huge moment and we got to do it in our own gym.”

Jeremy Purvis was the BDN All-Area Player of the Year and his dad Coach of the Year in 2000-01. The 6-foot-7 senior led the 25-3 Upstate Illini-East champion Vikings, averaging 19 points, seven rebounds and five assists. He hit nearly 40 percent of his 3-point tries and was also a top defender, blocking six shots in the regional final win against Rockford Christian Life. He had a career-high 46 points against Rockford Christian.

To prove it was no fluke, the Vikings went 22-6 and added another regional title the following year.

Purvis was surprised to find himself coaching the girls basketball team in 2002. Just before the season began, the head coach stepped down and with no other takers, he stepped in to coach both the boys and girls teams, relying on assistant Lennie Doetch to take a bigger role with the boys.

The Vikings were champions in the Four Rivers Conference and unbeaten until they lost a super-sectional matchup with eventual state runnerup Hampshire, 59-56.

“That was one of the best basketball games I’ve ever been involved in,” Purvis said. “That was a lot of fun. So was playing in the our new gym. My daughter Lauren scored the first basket there so that was pretty cool.”

Adapting to the Big Northern was perhaps his biggest challenge.

“It’s very tough to get off the mat in the Big Northern,” he said. “It’s a rugged conference. We have years when we are very competitive, but it’s tough to be a consistent winner. We’re making strides.”

Keeping up with the conference requires more than just athletes.

Well, he’ll leave that up to his successor, Aaron Sullivan, who also took over for him as football coach in 2006. Purvis went 22-2 his first two seasons, then returned to the football team in 2001 and went 45-9 over a five-year stretch.

“We really tried to make it a family atmosphere, for the kids and the coaches, during the season and off-season,” he said. “I’m going to miss the post-game get-togethers at our house after football games with all the coaches and helpers. That was pretty special, that time with our friends.”

Purvis, who will turn 60 in August, has no plans now other than to spend time with his wife.

“We spent a lot of time apart during our working years,” he said. “I want to spend as much time together as we can now.”