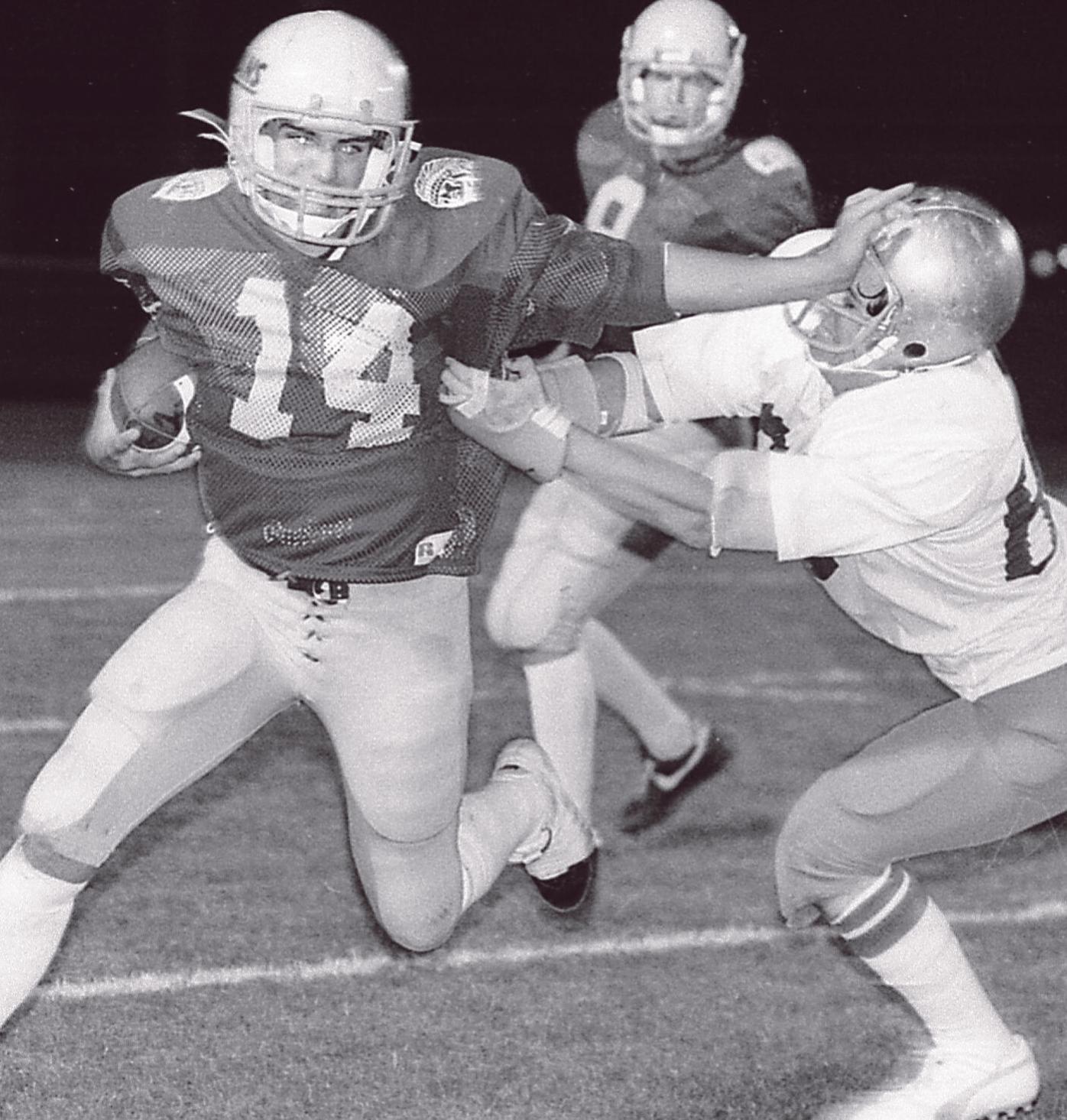 Mike Larson (14) was a versatile two-way standout for Hononegah’s Indians in 1985. 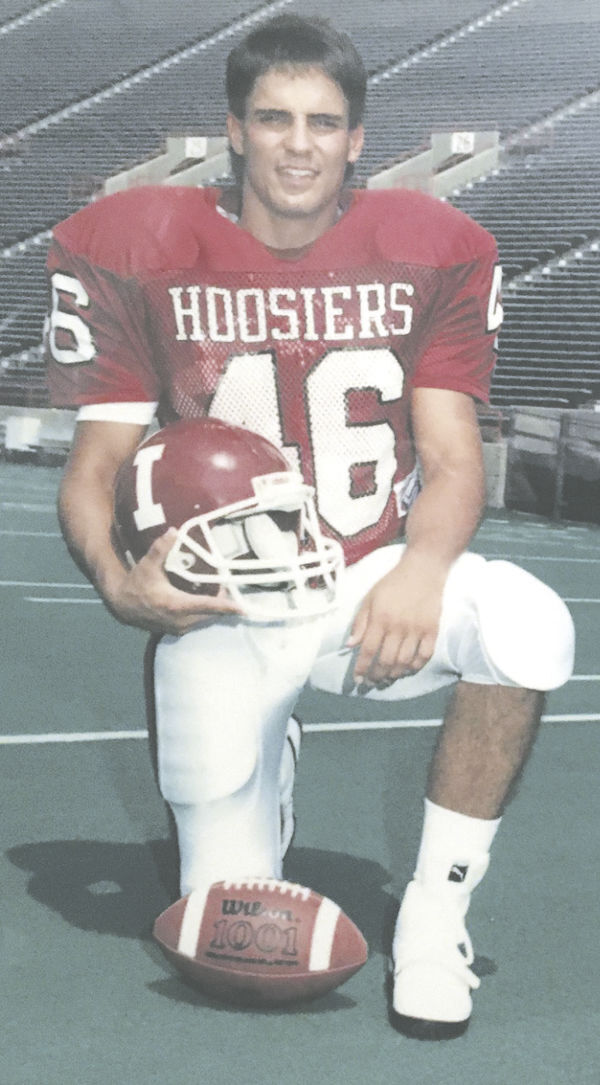 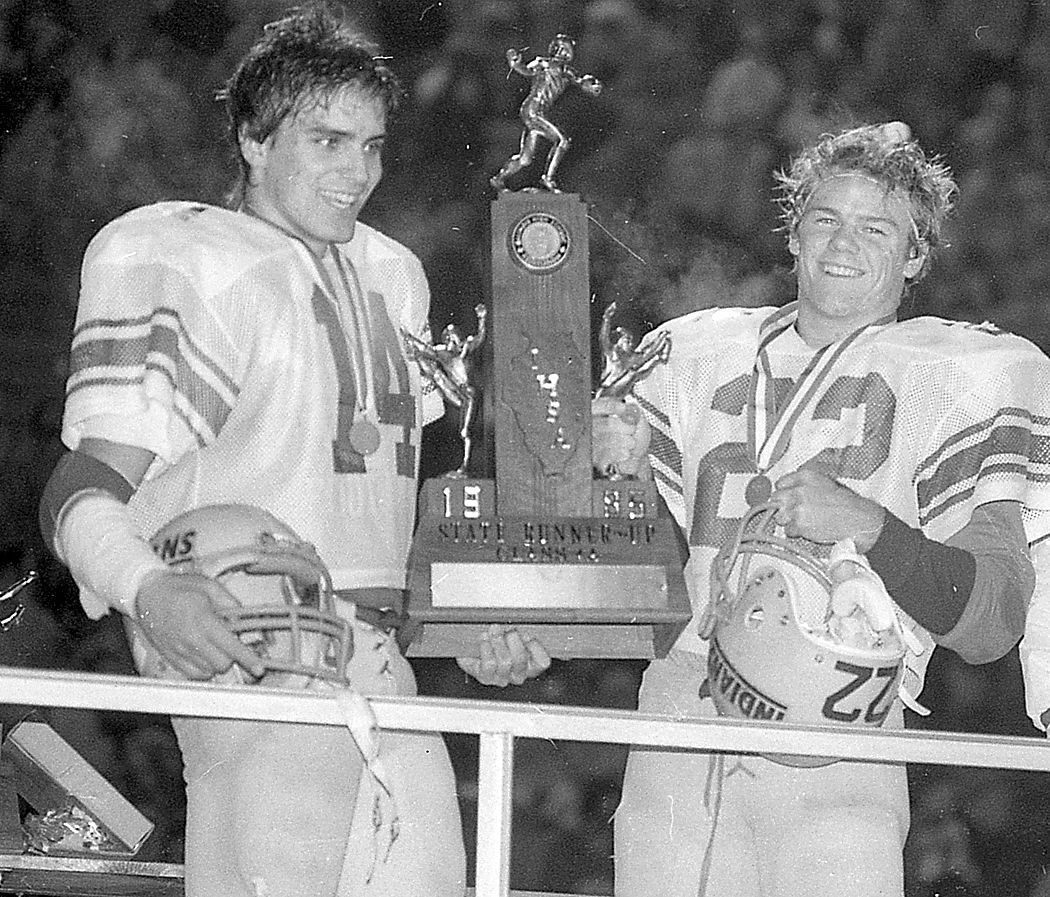 Mike Larson, left, and Mike Strasser showed off the trophy Hononegah received after finishing second in the IHSA 4A state playoffs in 1985.

Mike Larson (14) was a versatile two-way standout for Hononegah’s Indians in 1985.

Mike Larson, left, and Mike Strasser showed off the trophy Hononegah received after finishing second in the IHSA 4A state playoffs in 1985.

ROCKTON—When the Indiana Hoosiers upset ninth-ranked Penn State in overtime, 36-35, on Oct. 24, they broke a losing streak against Top 10 teams dating back 33 years.

Rockton native Mike Larson was a sophomore defensive back and special teams player on the Hoosiers team that traveled to Columbus, Ohio, in 1987 and shocked the No. 9 Ohio State Buckeyes, 31-10.

“Their coach (Earle Bruce) called it their program’s darkest day,” a chuckling Larson said in a telephone interview. “There were over 90,000 fans in the stands. At the end there were maybe 20,000 people, all behind our bench. It was pretty neat.”

Indiana went on to knock off Michigan the following week, its first victory over the Wolverines since 1967 and its lone win in the series until the current banner season.

Michigan State broke up the party after that and went on to play in the Rose Bowl. Indiana finished 8-4 after a 27-22 loss to Tennessee in the Peach Bowl in Atlanta.

The son of Bill Larson, a former American Football League linebacker with the Boston Patriots in 1960, Mike was a stellar three-sport prep athlete. His older brother, Bill Jr., was a starting senior fullback and linebacker when Mike was brought up to the varsity as a freshman midway through the 1982 season.

“I think Bill was the best player on that team,” Mike said. “Unfortunately, he suffered a hairline fracture in his heel and had to miss some games. He returned for the last regular season game and our playoff loss to Geneseo. That injury really cost him in terms of recruiting.”

“My brother was one of the smartest students in his class,” Mike said. “He was one of those guys who could do his Physics homework while he was talking to his girlfriend on the telephone. I could never do that.”

Like his brother, Mike could tear it up on a football field. He could seemingly do it all for the Indians. He was one of the area’s best running backs, receivers, punters and defensive backs, earning All-NIC-10 and Daily News All -Area honors.

As a senior, he played end, linebacker and safety, intercepting three passes and finishing third on the team in tackle points with 80. Two of those pickoffs occurred in a 25-6 win at Lombard Montini in an IHSA Class 4A quarterfinal playoff game.

On offense, he rushed for 862 yards and caught 39 passes for another 488 yards, scoring 68 points for a 1985 team that finished 10-4 overall and runnerup in the state. The Indians fell to Washington, 28-12, in the title game on the frozen artificial turf at Illinois State’s Hancock Stadium.

“I wish we’d played that game on grass,” Larson said. “That artificial turf was old and it was so slippery. That was still a great season and I really appreciate all those memories. I feel bad for all the kids at Hononegah now missing out on that because of COVID.”

Larson said his first inclination was to follow another former Hononegah star, Dave Tansor, up to Madison and play for the Badgers.

“I was scheduled to spend an entire recruiting weekend there, but I was on the basketball team and we were playing Boylan on Saturday so it amounted to just part of a Friday,” he said. “Who knows if I’d been able to go the whole weekend?”

Instead, Indiana won him over. He had attended a summer football camp of Bill Mallory’s and was impressed with the campus and coaches.

“The main thing was that I really wanted to play in the Big Ten,” Larson said. “I went there thinking I would play flanker. But they really had recruited me as an athlete. Two days into practice there, the defensive coordinator told me I was going to free safety. For Indiana, the free safely calls all their defenses. It really wasn’t what I wanted, but it’s where they saw me playing more so I was OK with it.”

The Hoosiers were a solid if not stellar team during his tenure there.

“We could play with anybody for three quarters,” he said. “But we were so small. We had defensive linemen who were 240 pounds. Those 300-pound offensive linemen tend to beat you up in the fourth quarter and that’s where we would end up losing. This current Indiana team is bigger than we were.”

Larson works at the nuclear plant in Byron. He lives in Rockton and his daughter, Skylar, is a junior at Hononegah.

“She’s a fantastic athlete, but her love is dancing and singing,” he said. “I’m a dance dad and I’m OK with it.”

As for this weekend’s game in Madison, Larson expects Indiana’s secondary to pose some problems for UW freshman QB Graham Mertz. They lead the nation in interceptions.

“If Indiana keeps it close, they find a way to win,” he said.