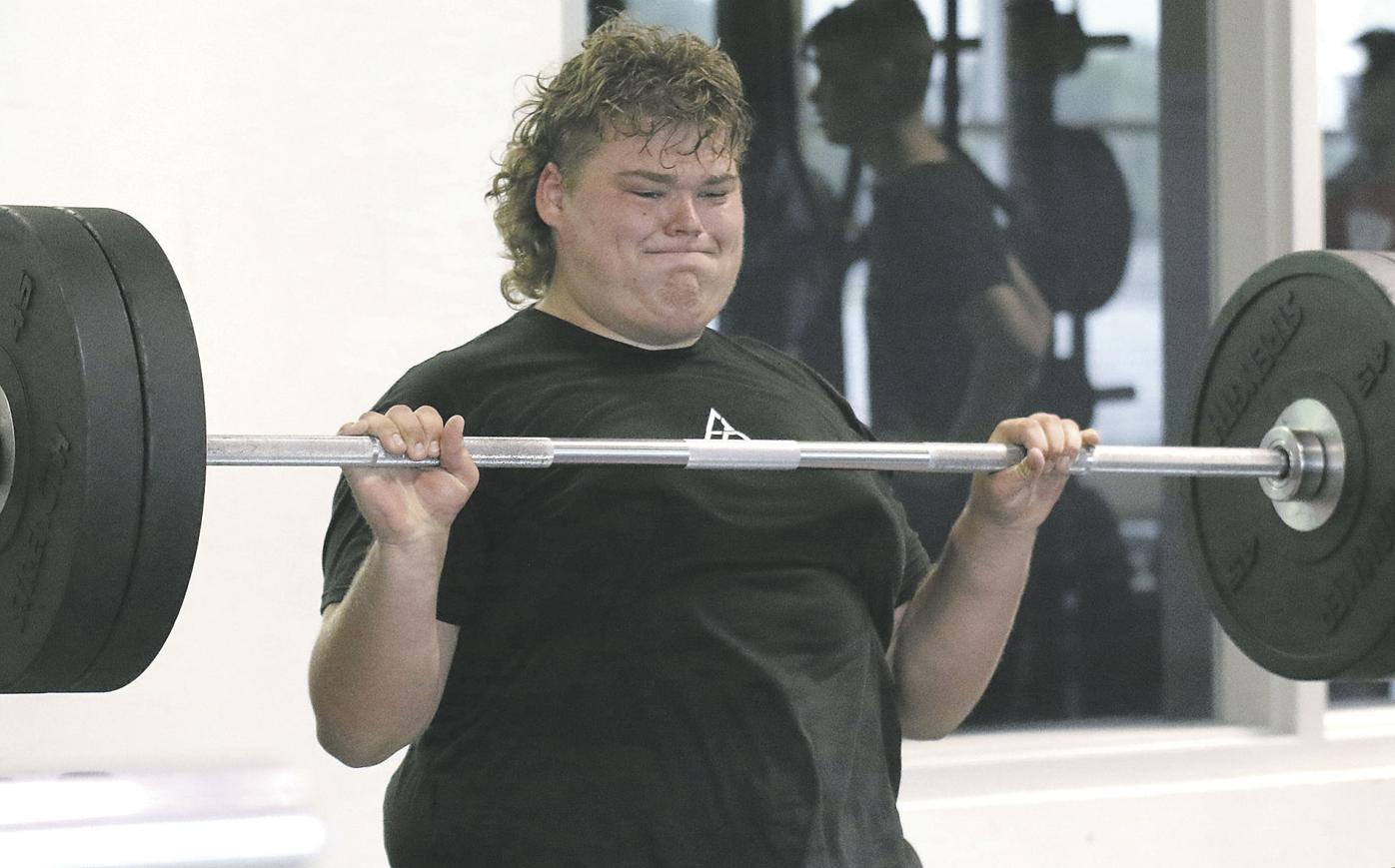 Hononegah lineman Jacob Klink prepares to muscle up as the team worked out in the weight room Monday. 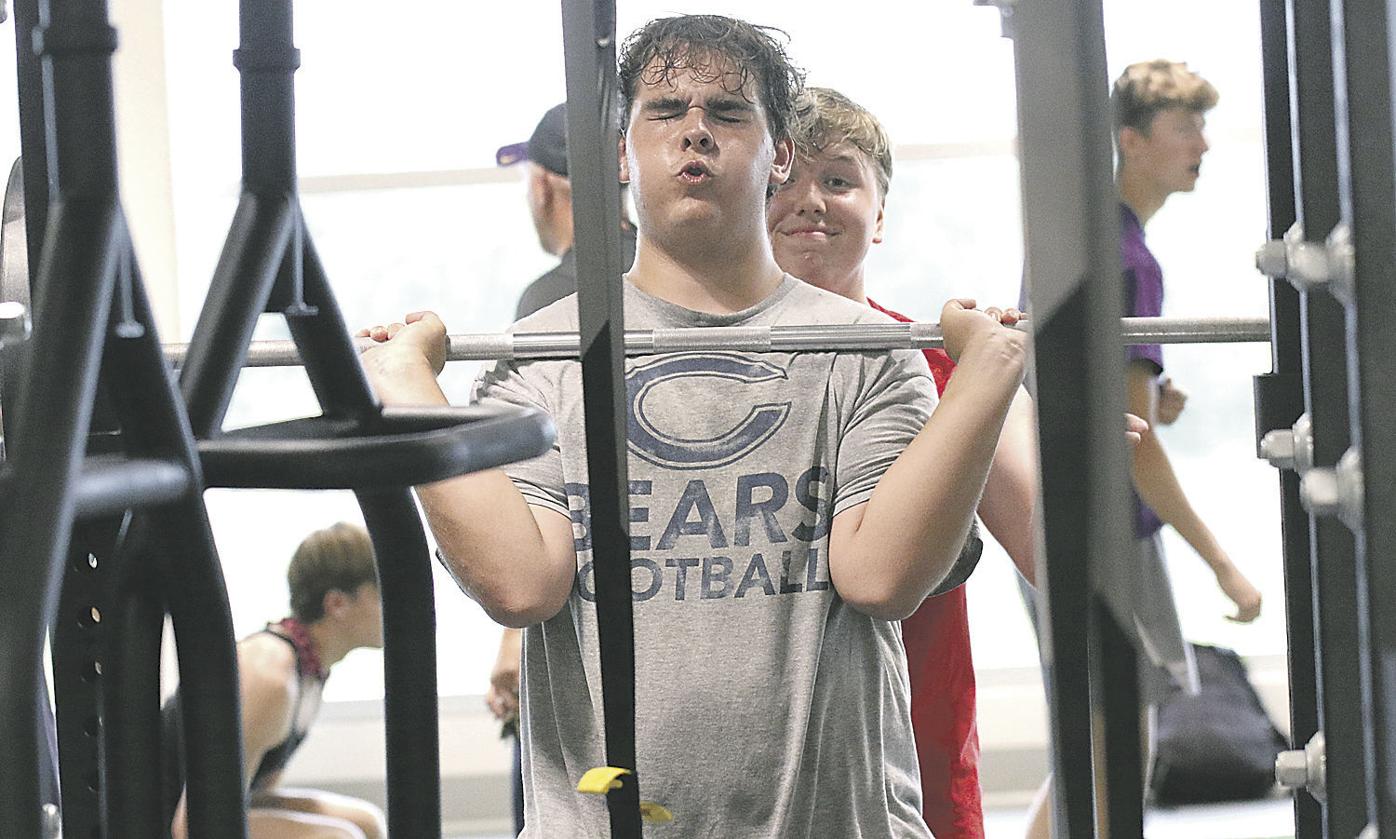 Junior Andrew Del Monico strains as he works out Monday in the Hononegah weight room.

Hononegah lineman Jacob Klink prepares to muscle up as the team worked out in the weight room Monday.

Junior Andrew Del Monico strains as he works out Monday in the Hononegah weight room.

ROCKTON—While there were plenty of grunts and groans in the upstairs weight room at Hononegah High School Monday morning, it was music to Brian Zimmerman’s ears.

The head football coach remembers how a year ago this facility was silent—shut down by COVID-19.

“We weren’t able to lift weights at school all last summer,” Zimmerman said. “Being able to get back in here is huge.”

They weren’t able to play football in the fall, either. They had to wait until a delayed spring season which amounted to just five games and a 3-2 record.

Monday started the second round of drills after taking a week off. Things still haven’t gone as smoothly as in pre-COVID past, but the Indians are adjusting. Since Beloit College decided to forgo its summer 7-on-7 league, Hononegah’s players were able to schedule some 7-on-7 activity with Rockford Boylan and will host Milton High School from 9-11 a.m. on Thursday.

Monday, at last, they were back at it with over 60 varsity players, over 20 sophomores and 45 freshmen.

The biggest change for Zimmerman is his staff. Last year’s offensive coordinator, Jim Ryan, moved out of the area. Hononegah found a strong replacement, however, with alum Jeremy Warren stepping in. His son, Cole, is a sophomore quarterback on the team.

The Hononegah offensive line returns virtually intact, but will be missing long-time assistant coach Andy Trice, who is currently battling health issues. Zimmerman said Phil Adams will be asked to assume the leader of that unit.

“Phil worked with Andy for two years and he is well aware of his philosophy and his drills,” Zimmerman said. “I think Phil also has some of his own ideas he wants to incorporate.”

“Brian put in 20 years and thought it’s a good time to hang it up,” Zimmerman said. “We’ve had to do a bit of shuffling around to fill all the roles, but I think that we’re going to be good to go.”

He likes his team’s chances again. The Indians got off to an amazing start last season, blasting Belvidere North 61-0 and Rockford Auburn 50-7 before losing to Rockford Boylan 21-7. They lost a 26-24 heartbreaker to Harlem before finishing with a 53-7 rout of Freeport.

The defense has several stalwarts returning, including lineman Aidan Peters and defensive backs Dylan Sayles and Bryce Goodwine. The offense lost Dylan Collins and Braden Sayles, but also has plenty of faces returning.

“We have the line intact and we have some skill guys back,” Zimmerman said. “We have our quarterback (Isaac Whisenand) and we have a real strong junior class coming in. We have a lot of work to do, but I’m excited about this group.”