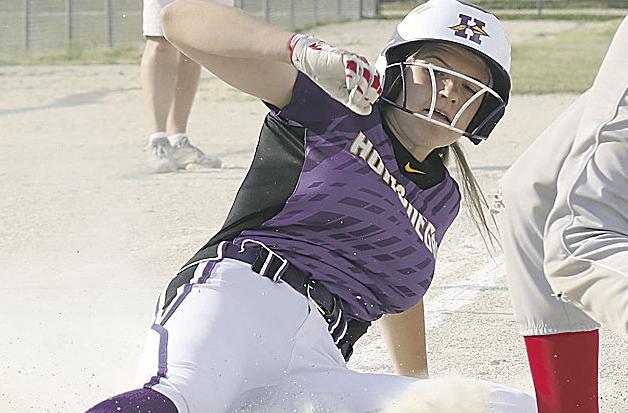 Hononegah’s Lexi Bach, slides in to score on a wild pitch as the throw back to the Jefferson pitcher covering is errant as well Wednesday. 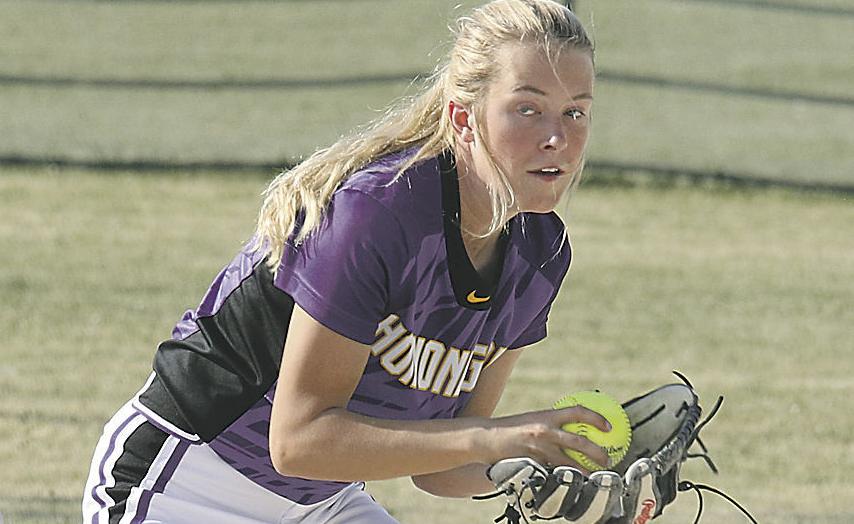 Hononegah shortstop Kendall Johnson, voted MVP in the NIC-10, forces a Jefferson runner out at second base Wednesday.

Hononegah’s Lexi Bach, slides in to score on a wild pitch as the throw back to the Jefferson pitcher covering is errant as well Wednesday.

Hononegah shortstop Kendall Johnson, voted MVP in the NIC-10, forces a Jefferson runner out at second base Wednesday.

ROSCOE—Pitcher Braxton Brown said she may look up video of Hononegah’s early-season 3-0 victory over Huntley before Friday’s IHSA 4A regional final rematch with the Red Raiders.

The senior isn’t too sure how much it will help her, though.

“It seems like so long ago,” she said after picking up Wednesday’s 17-0 regional win over Rockford Jefferson at Swanson Stadium. “I remember it was cold and Huntley is probably a lot different now and so are we. It’s just going to be a real tough game.”

“A lot of people hear the name Briana Bower and no doubt wonder if we can play with them,” Hononegah head coach Dan Bohn said. “But we already showed we can. Beating them should give us some confidence. Sure, it was a cold day and (Bower) was topping out at 62 (mph). Coaches tell me she’s throwing 66 to 68 now. But that’s fine. We just hope we can keep the game low-scoring with our defense and stay in position to win. Two years ago we did that and Kendall (Johnson) hit a two-run homer to win 4-3. Amanda did the same this year.”

The Indians have teed off on most NIC-10 pitching this season, with the exception of Harlem ace Cheyenne Nietz. Bowers is cut from the same cloth. Bohn will crank up the pitching machine in practice trying to get his hitters ready.

“At least we can see the speed though we may not see the spins and the rise,” he said. “We’ve done a really good job hitting line drives and hitting the gaps. The girls aren’t swinging for the fences. Balls are still going to go out of the park if you hit line drives.

“We haven’t played a lot of small ball, but we have girls with speed who can lay down bunts. We practice it quite a bit and we are going to have to lay down some bunts against Briana. The key is to get a leadoff batter on in an inning.”

The Indians needed just three innings and seven hits to pile up 17 runs against the J-Hawks, who managed one hit off Brown. Hononegah also had eight bases on balls and four batters were hit by errant pitches. Natalie Williams was 2-for-2 with a double, two runs scored and an RBI.

“Kendall led the league in hitting at .607 and is probably the best defensive player in the conference,” Bohn said. “The all-conference team wasn’t selected by position. We ranked our top 20 and they took the top 16 vote-getters for a First Team and 17 through 24 received Special Mention.”

Like most coaches, Bohn was just happy to get the first usually lop-sided regional game out of the way.

“I think it was good for us to get out some of the first game of regionals jitters,” Bohn said. “I wanted to see us play good, solid defense and we did that. Our outfielders ran some balls down and caught them in the gaps. We made some nice plays on the infield. We were able to get both Braxton and Sierra (Armstrong) throwing some postseason pitches.”

It’s that Indians’ defense that will be key Friday.

“I know I’m not the fastest pitcher and my strength is hitting spots,” Brown said. “It helps knowing I have that strong defense behind me. Even if they hit a rocket, Kendall has been able to dive for those and (center fielder) Briella and our outfielders have run them down. I think we know we can get this done.”

• UP NEXT: Hononegah hosts Huntley at 5 p.m. Friday at Swanson Stadium.