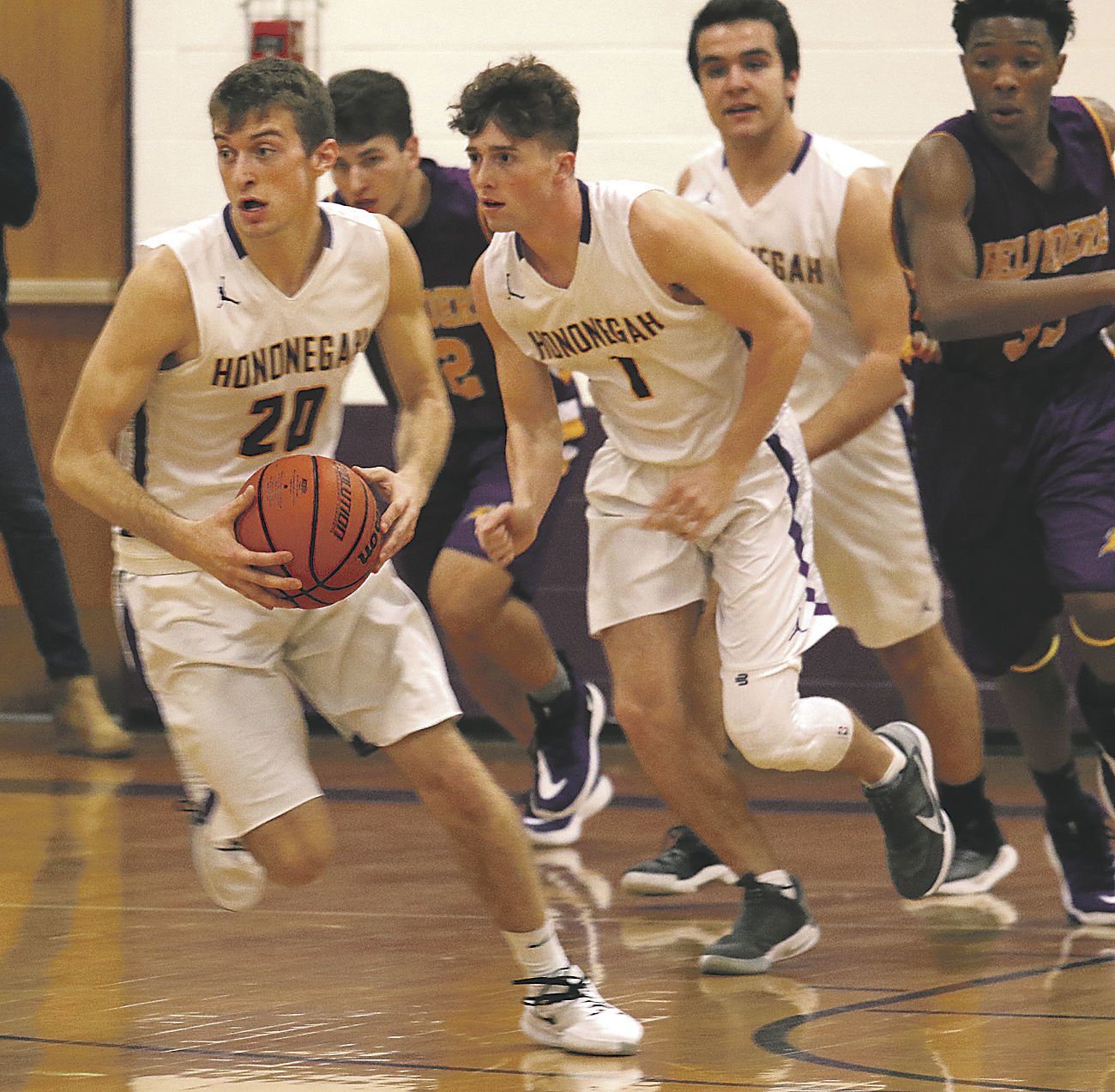 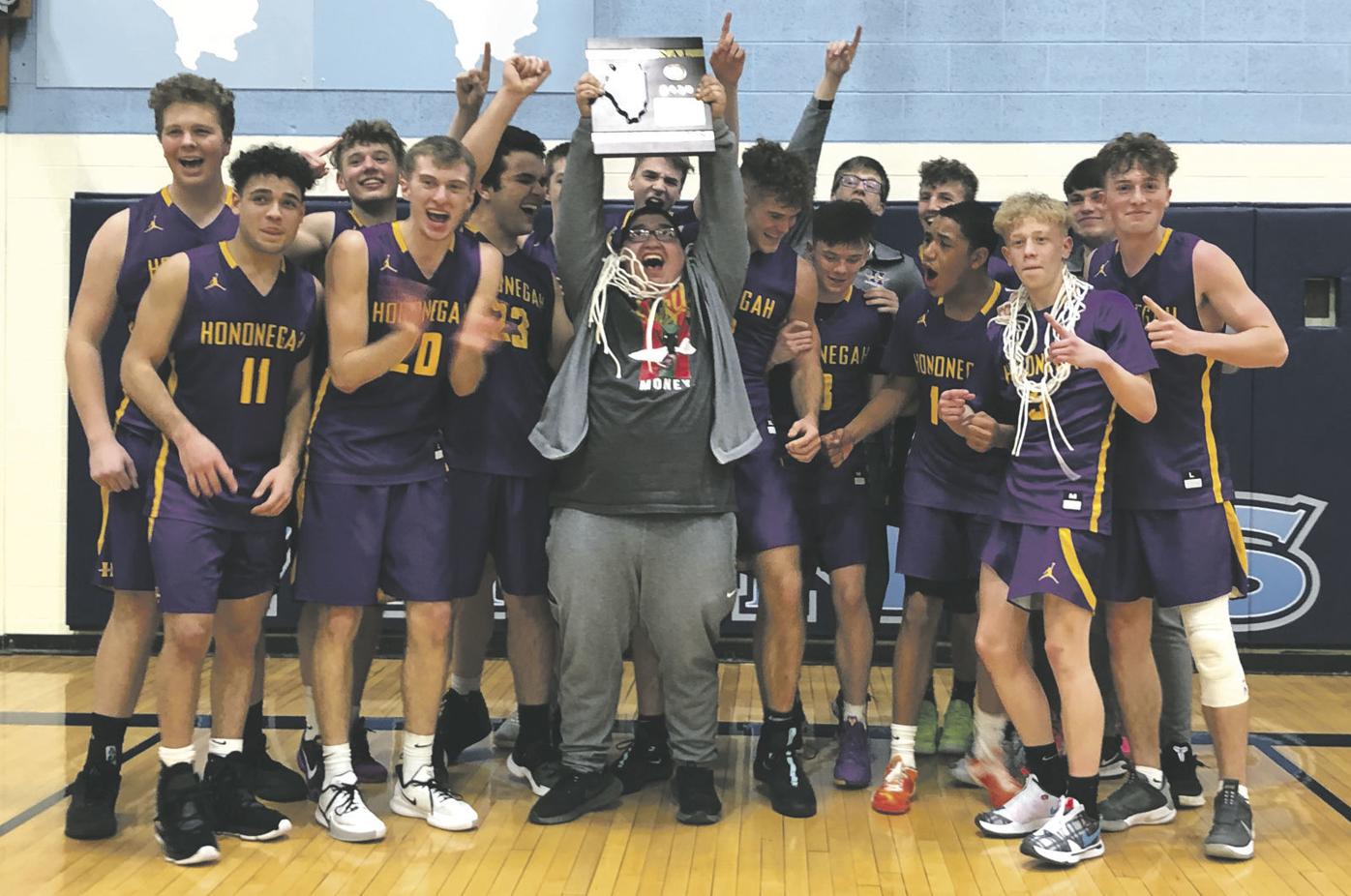 The Hononegah Indians made sure manager Ryan Alonzo was front and center with the sectional plaque last Friday night at Rockford Guilford.

The Hononegah Indians made sure manager Ryan Alonzo was front and center with the sectional plaque last Friday night at Rockford Guilford.

ROCKTON—“Cinderella” is probably an overused term to describe any under-.500 team surviving to the sectional level.

Maybe “darkhorse” is a better adjective to describe the Hononegah Indians (15-19) as they head into a semifinal game in the IHSA 4A McHenry Sectional with St. Charles North (23-9). Tipoff is at 7 p.m. Wednesday.

The thing is, the Indians really haven’t didn’t have all their horses until late in the season.

That’s when junior guard Trent DeVries debuted after recovering from knee surgery over the summer. Not to mention 6-5 senior post player Jarrett Strate-Lutzow returned to the lineup after lacerating a kidney in a fall during a Christmas Tournament.

Both players have been crucial to the Indians’ late-season success. After both became available, the Indians went 8-4. More importantly, they’re 3-0 in the postseason, with impressive wins over No. 1-seeded DeKalb and NIC-10 power Rockford East.

After that amazing win, accomplished with a buzzer-beating 3-pointer by reserve Owen Hart, Miller was asked if his eam deserved a finish like that for all the perserverance it has shown this season.

“They’ve gone through a lot of adversity,” he said. “Deserve is a funny word. I don’t know about deserve, but I know that everyone in our locker room works hard enough to be a champion. I’m thrilled they get to be a champion.”

The height-challenged Indians sorely missed Strate-Lutzow in the paint during his absence. They also missed the ballhandling DeVries possesses. Since his return, the team’s turnovers are way down. He also gives the Indians another 3-point threat.

Or decoy. Against East, the Indians used DeVries and sharpshooter Chris Akelaitis to draw the defense away and give Gabe Roessler a long passing lane into the corner to Hart. With just 1 second remaining, the 5-8 sophomore catch and shot for an unlikely finish to a hotly-contested showdown.

“Owen’s shot was huge, obviously, but we can point to six or seven big plays that led up to that,” Miller said. “I couldn’t be more proud of the guys.”

When we got down four with about three minutes left I think Isaiah had a great steal, Gave had a deflection and we had a big rebound from Jarrett. All the things came into play. Owen’s shot was huge, obviously, but we can point to six or seven big plays that led up to that. I couldn’t be more proud of the guys. Trent pushed himself back probably before he was ready. For him to be able to raise a regional plaque, it brought tears to my eyes.”

The Indians obviously will have their hands full against St. Charles North and Connor Linke, a 6-foot-9 forward bound for Bradley University. He can score, block shots and draws a lot of attention away from guards Christian Czerniak, Luke Scheffers and Colin Nelson, who can all knock down threes.

The North Stars have plenty of size. In addition to Linke, they have 6-7 Ethan Marlowe, 6-6 Thomas Kellen and 6-4 Max Love.

“They’re really tall,” Miller said. “(Linke) was their conference Player of the Year and the best rim defender we’ve seen. They start a 6-6 kid, the 6-7 kid comes off the bench and the 6-4 kid is a shooter. Plus their point guard was first team all-conference. They’re pretty good, you know, but that’s what you expect to see at this time of the year.”

Miller said staying with the North Stars in terms of rebounding is his biggest concern.

“How are we going to rebound with them?” the coach said. “That’s No. 1. Obviously it won’t fall on one guy. Our guards are going to have the responsibility of pressuring the passers and trying to keep the ball out of (Linke’s) hands. We’re definitely going to need all five guys to rebound.”

The Indians repeatedly took the ball to the rim in the regional and aren’t going to shy away from doing that again. But perimeter shots will be key, too.

“The beauty is being able to make shots is that you can spread defenses,” he said.

St. Charles North tied St. Charles East for the championship in the DuKane Conference, but defeated the Saints in all three meetings during the season. In the regional final, Scheffers led the North Stars with 12 points and four assists. Linke was held to six points, but had nine rebounds.

“So much of that is matchup based and you can get in trouble comparing scores,” Miller said. “There are so many factors. The key in the state tournament is that it’s not a best-of-seven series. You just have to be better than somebody on one particular night. Hopefully that’s us.”