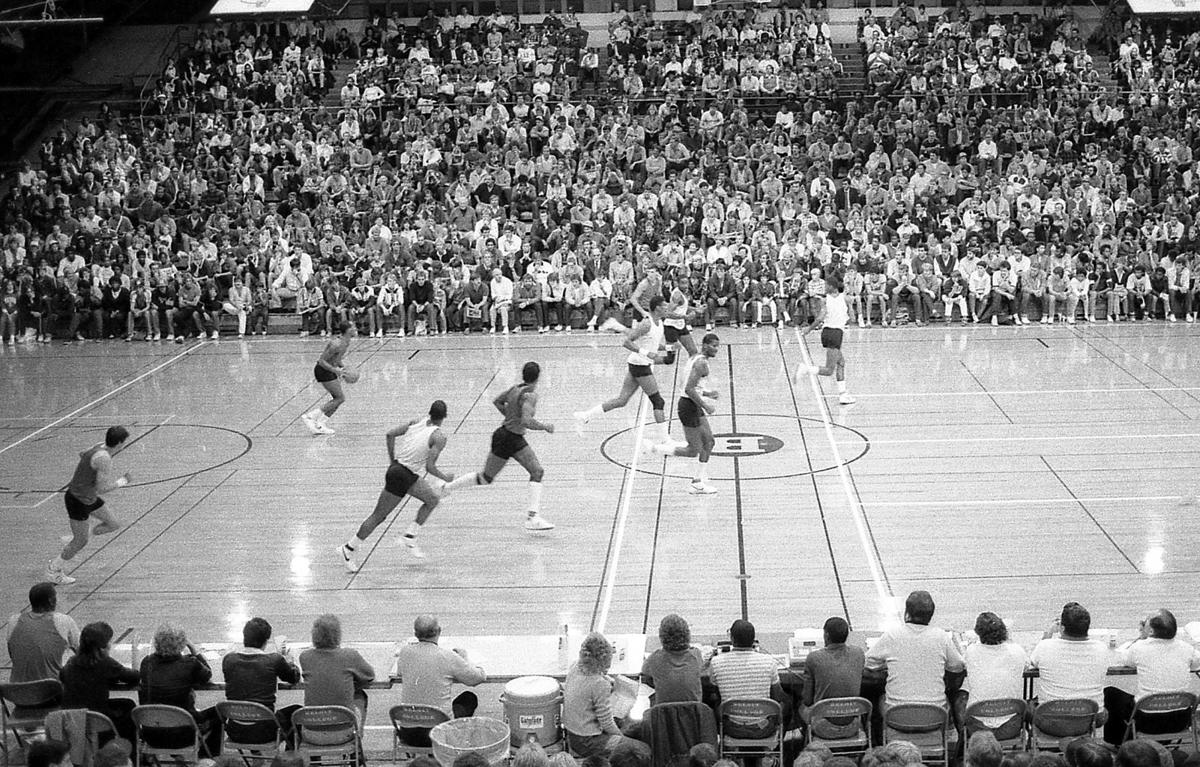 The Chicago Bulls filled Beloit College’s Field House for an intrasquad scrimmage in 1985. 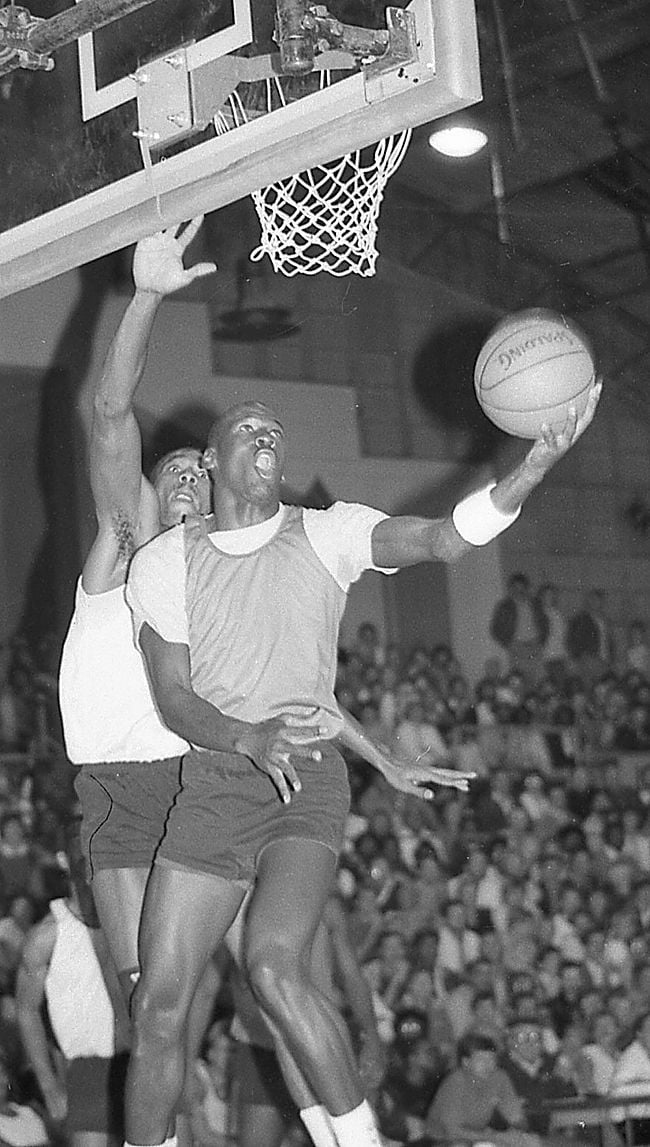 Michael Jordan starred in Bulls intrasquad games in 1985 and 1986 in Beloit. 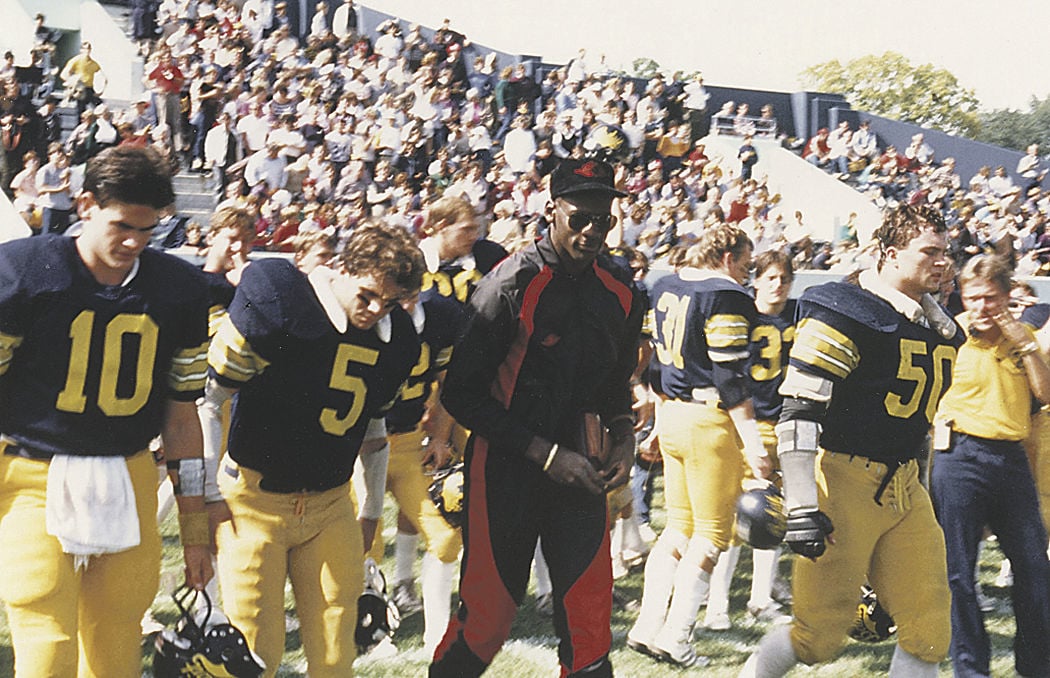 Michael Jordan flipped the pregame coin at Strong Stadium prior to Beloit College’s game with Cornell in 1985.

The Chicago Bulls filled Beloit College’s Field House for an intrasquad scrimmage in 1985.

Michael Jordan starred in Bulls intrasquad games in 1985 and 1986 in Beloit.

Michael Jordan flipped the pregame coin at Strong Stadium prior to Beloit College’s game with Cornell in 1985.

BELOIT—The immensely popular “The Last Dance,” an ESPN documentary focusing on the rise of the 1990’s Chicago Bulls, no doubt has a lot of Beloiters remembering when Michael Jordan and his pals in red called the Beloit College Field House their home court.

No kidding. That actually happened back in 1985, Jordan’s second NBA season. The team had a new owner (Jerry Reinsdorf), a new president of basketball operations (Jerry Krause), a new coach (Stan Albeck) and, of course, a future Hall of Famer.

Albeck, the team’s third coach in four seasons, wanted a place to train far from the distractions and prying eyes of Chicago. Ninety miles away he found it as good friend Bill Knapton and Beloit College loaned him the use of the Field House.

“Jerry Krause, the team’s trainer and some other executives just showed up without any appointment one day,” DeGeorge said. “They’d heard about our springy raised floor and wanted to check it out themselves. Then Krause walked into my office and said, ‘How would you like to have the Chicago Bulls train here?’

“I said, ‘I wouldn’t.’ They were stunned. I told them whenever I’d been on a campus that had a pro team team training there, they were jerks. I didn’t want to subject our students to anything like that. Krause said, ‘If our guys come, they will act properly.’ I said then we would be interested. We went from there.”

The Bulls lived up to Krause’s promise.

“I just thought they acted right and everything about them was first class,” DeGeorge said.

Mark Heuring, who had just graduated from the college in May, was just a short time on the job as Sports Information Director when on Sept. 27, 1985, 18 Bulls and four coaches stepped off the bus ready to regroup after a 38-44 mark in 1984-85. In addition to MJ, the roster included Orlando Woolridge, Gene Banks, Dave Corzine, Quintin Dailey and Charles Oakley.

“Jordan was there for the practices, but otherwise pretty scarce,” Heuring said. “Billy McKinney and Gene Banks were the two players I remember who were very friendly and helpful. McKinney even knew about Beloit College. None of the players gave us any problems. The Last Dance paints Jerry Krause as a villain and I guess I can’t disagree there. Every dealing I had him with him he was really an abrasive person.”

The team held two practices daily and allowed the college athletes to watch from the sidelines. As for Stateline fans, they had two open practice sessions they could attend as well as an intrasquad game. Admission was $1 for the practices and $4 for the intersquad game.

Scott Fitzgerald was a 14-year-old South Beloiter, who rode his bike with friends Kirk Bell and Scott Olson to catch a Bulls practice. When they tried to collect autographs afterward, the players told them they didn’t have time then, but they should look them up at their headquarters at the Holiday Inn.

“We played video games and shot pool with them,” Fitzgerald remembered. “They were really cool guys. Kirk (Bell) actually beat Michael Jordan in a game of pool. Jordan said, ‘Do you want to play again?’ It’s kind of funny, but Kirk said, ‘Naw.’”

A wedding reception was being held in the adjacent banquet hall and members of the wedding party began filtering into the game area to take photos with the Bulls.

“They were very cool about everything,” Fitzgerald said. “That was a long time ago, but to be able to see Michael Jordan at that young age and see how cool the Bulls were to us was something you don’t forget.”

Jordan even briefly attended the Beloit-Cornell football game at Strong Stadium on Oct. 2. Long enough to flip the pregame coin anyway and the Bucs won the toss. That night, Jordan scored 46 points to help his Red team down the White team, 92-85, before a capacity crowd at the Field House..

Jordan said he enjoyed his camp in Beloit.

“It seems like everything is brand new and everyone is so positive,” he said.

Unfortunately, a broken foot suffered by Jordan three games into the regular season caused him to miss 64 games and the Beloit experiment was doomed. Albeck was fired after the Bulls won only 30 of 82 games.

Albeck’s successor, Doug Collins, didn’t want to train in Beloit again, although the team did make one final appearance at the Field House, playing another intrasquad scrimmage there on Oct. 8, 1986.

Gary Polglaze remembers that game vividly. The Beloiter went to see Jordan, whom he’d admired since attending the 1982 Final Four in New Orleans.

“You had Jordan and North Carolina,” Polglaze said. “You had Patrick Ewing with Georgetown, Clyde Drexler and Hakeem Alajuwon with Houston and Pervis Ellison with Louisville. We had seats at the top of the Superdome, but then we went to a party and we ran into some Houston alums. Houston had lost, so they sold us their tickets. Fifteen rows up. We were right there when Jordan hit the game-winner against Georgetown.”

So Polglaze was ready for a show in Beloit.

“Then I heard my name over the PA to come down to the scorer’s table,” he said. “Bill Knapton said, ‘Gary, I really need you to do me a favor.’ The NBA refs they’d hired for the game were stuck on the interstate and he wanted me to fill in, along with the Bulls’ trainer.

‘I’d been officiating some high school games and some scrimmage games for Knapton, but at first I told him no way. Then I thought about it. This is a once in a lifetime opportunity so I said yes and he got me a referee’s shirt and a whistle.”

Gary is a bit height challenged, so the center jump with a pair of 7-footers, Brad Sellers and Jawann Oldham, was no easy task.

“I think I got the ball up to their elbows,” Polglaze said with a chuckle.

The game started and Corzine got a pass inside a minute into it.

“Jordan just hammered him,” Polglaze said. “The first foul I have to call is on Michael Jordan of all people. He patted me on the butt and said something like, ‘Good call.’”

Sensing the need to assert some authority, Polglaze said he tried to appear stern.

“I said something like, ‘We’re going to shoot two, you guys stay down,’ something stupid like that and then I turned to give Corzine the basketball and I hit him with it right in the (nether region).

“(Corzine) doubled over and grunted and the crowd just laughed.”

Polglaze settled in after that, although Collins didn’t give the replacement refs much love in a real physical game.

“Collins never stopped screaming at me and the other ref,” Polglaze said. “I wanted to say, ‘Give me a break. I was just doing Orfordville the other night.’”

The NBA refs showed by halftime and Polglaze accepted a pat on the back from Knapton. Now an assistant coach, McKinney shook Polglaze’s hand and slipped him 50 bucks, which he used to pay for a few postgame toasts at Pulaski’s Lounge.

As for the Bulls, Jordan scored 30 points to lead his Red team to a 92-80 win. He went on to earn All-NBA First Team honors for the first time, but the Bulls finished just 40-42, but reached the playoffs.

In the 1987 draft, they selected center Olden Polynice and forward Horace Grant, then dealt Polynice for Scottie Pippen. The foundation fell into place for a Bulls team that would dominate the NBA in the 1990s. Catch ESPN for the rest of that story.