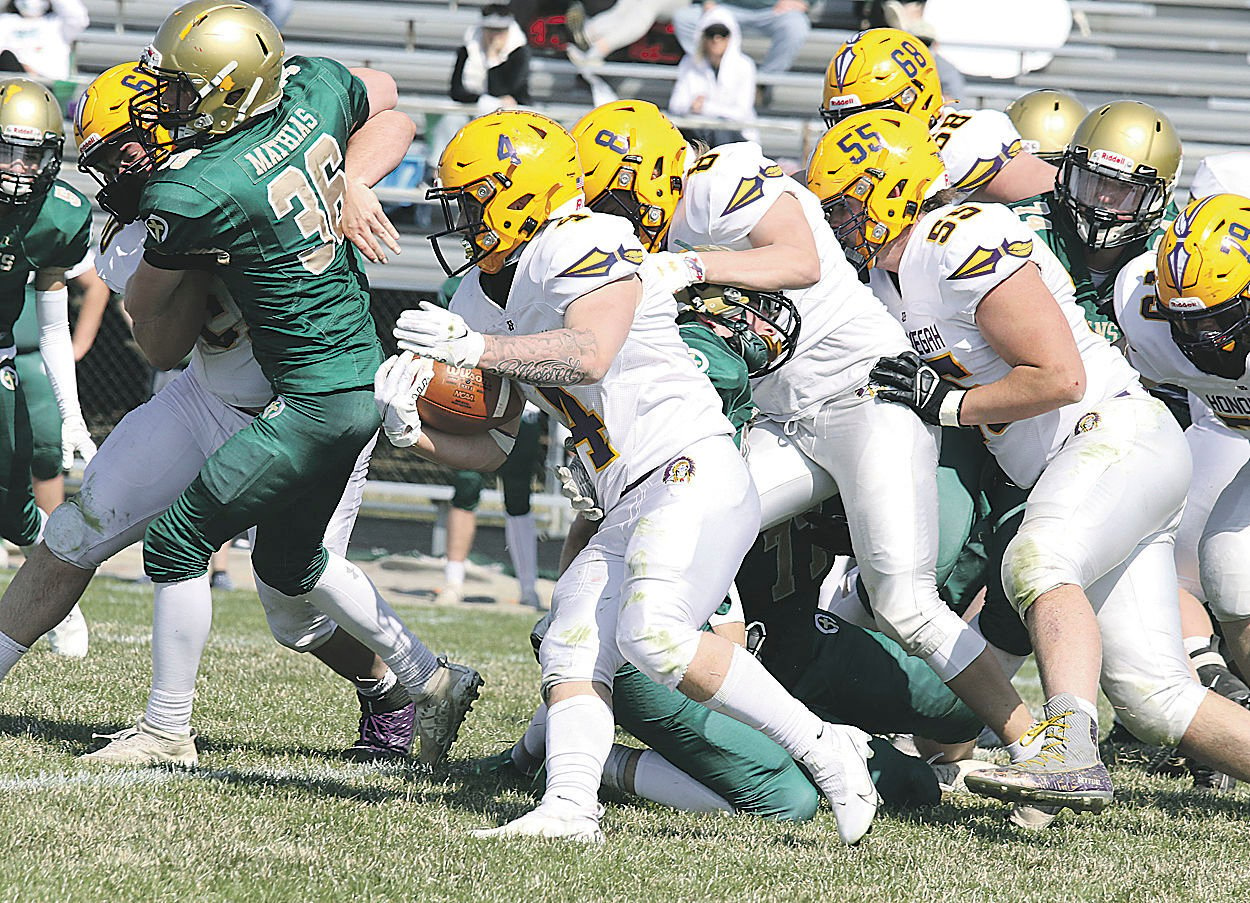 Honononegah’s Dylan Collins (4) looks for a seam during Saturday’s loss at Rockford Boylan. 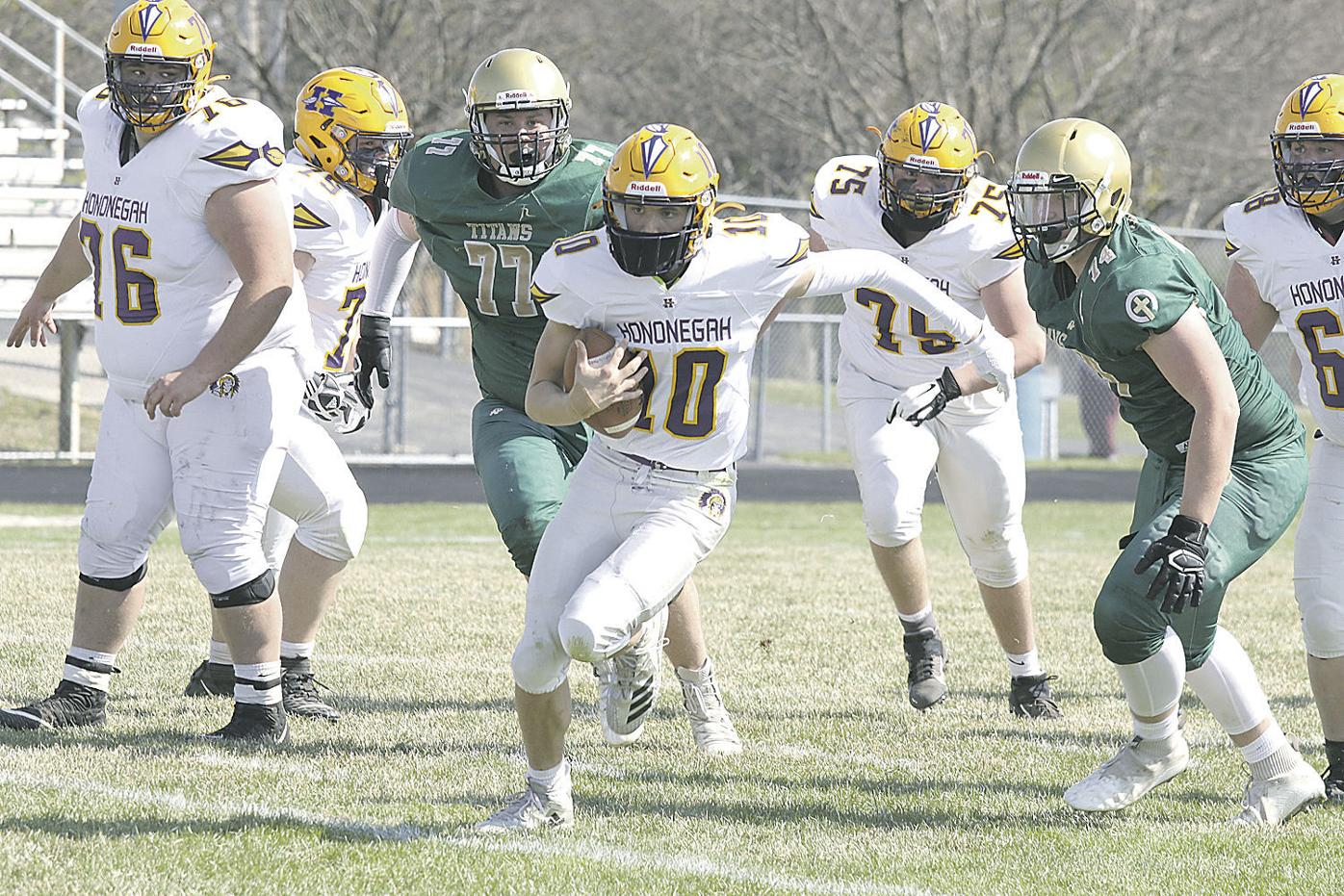 Honononegah’s Dylan Collins (4) looks for a seam during Saturday’s loss at Rockford Boylan.

ROCKFORD—Brian Zimmerman admits he is a little worried about just how his team will react to Saturday’s disappointing 21-7 loss to rival Rockford Boylan.

“This is a tough, bitter one,” he said. “I thought we would be focused. The kids have worked so hard and had a good week of practice, but I felt we didn’t play as well as we can. We didn’t execute.

“Hopefully, we can rebound and get after Harlem because that’s another big one for us.”

The 2-1 Indians will play at the undefeated Huskies (3-0) Saturday and face another top quarterback in Harlem’s James Cooper.

They’ll have to do better than they did in containing Boylan’s 6-foot-2, 220-pound senior Benito Jass. The Indians had blanked their first two opponents, but Jass and the Titans had them on their heels in the first half, building a 21-0 advantage. Jass had 168 yards passing on just 10 throws in the first half to go with 58 yards rushing. He finished with 90 yards on the ground.

“In the first half, our defense played horribly,” Zimmerman said. “They did not tackle anybody. We knew (Jass) was going to be their guy and we let him run free. Not to take anything away from Boylan. They are a very good team. It’s unfortunate for them that there are no playoffs because they are very physical and I think they can do some things in 5A.”

After a quick three-and-out by Hononegah to open the game, Boylan took advantage of a poor punt and excellent field position to score on a 41-yard burst by elusive Jass, who broke several tackles along the way.

Another 4-yard run by Jass in the second quarter pushed the lead to 14-0. That play came after what appeared to be a quick whistle negated a fumble recovery and return for a score by the Indians’ Dylan Sayles.

Finally, Jass rolled out and connected with Xavier Bryant on a 65-yard touchdown pass just before the half.

While the defense needed a halftime gut-check, the Hononegah offense was reeling as well. The Indians held Boylan in check in the second half, but the offense could only score one touchdown. It was an impressive 82-yard drive at least, culminating in a 3-yard TD run by Stuart Hale early in the fourth quarter.

The Titans, ranked fourth in 5A, kept Hononegah bottled up after that.

The 2-1 Indians hoped to wear down Boylan’s interior line, which basically plays both ways, using their punishing running game. But the three-score deficit had them passing much more than they would have preferred. Junior quarterback Isaac Whisenand was 15-of-30 for 127 yards, but was intercepted three times.

“We certainly didn’t expect this the way we played the past two weeks,” Zimmerman said. “It was a big shock. I think we underperformed, honestly. Our young quarterback had a rough day. Our receivers had a couple drops. We ran the ball hard and we did some things, but unfortunately,we just left too much out there.”

The Indians, who had outscored their first two opponents 111-0, were 17-for-36 passing and ran for 120 yards, but with the sacks included ended up with a net 88 yards rushing on 35 tries. Dylan Collins had a well-earned 85 yards on 21 carries.