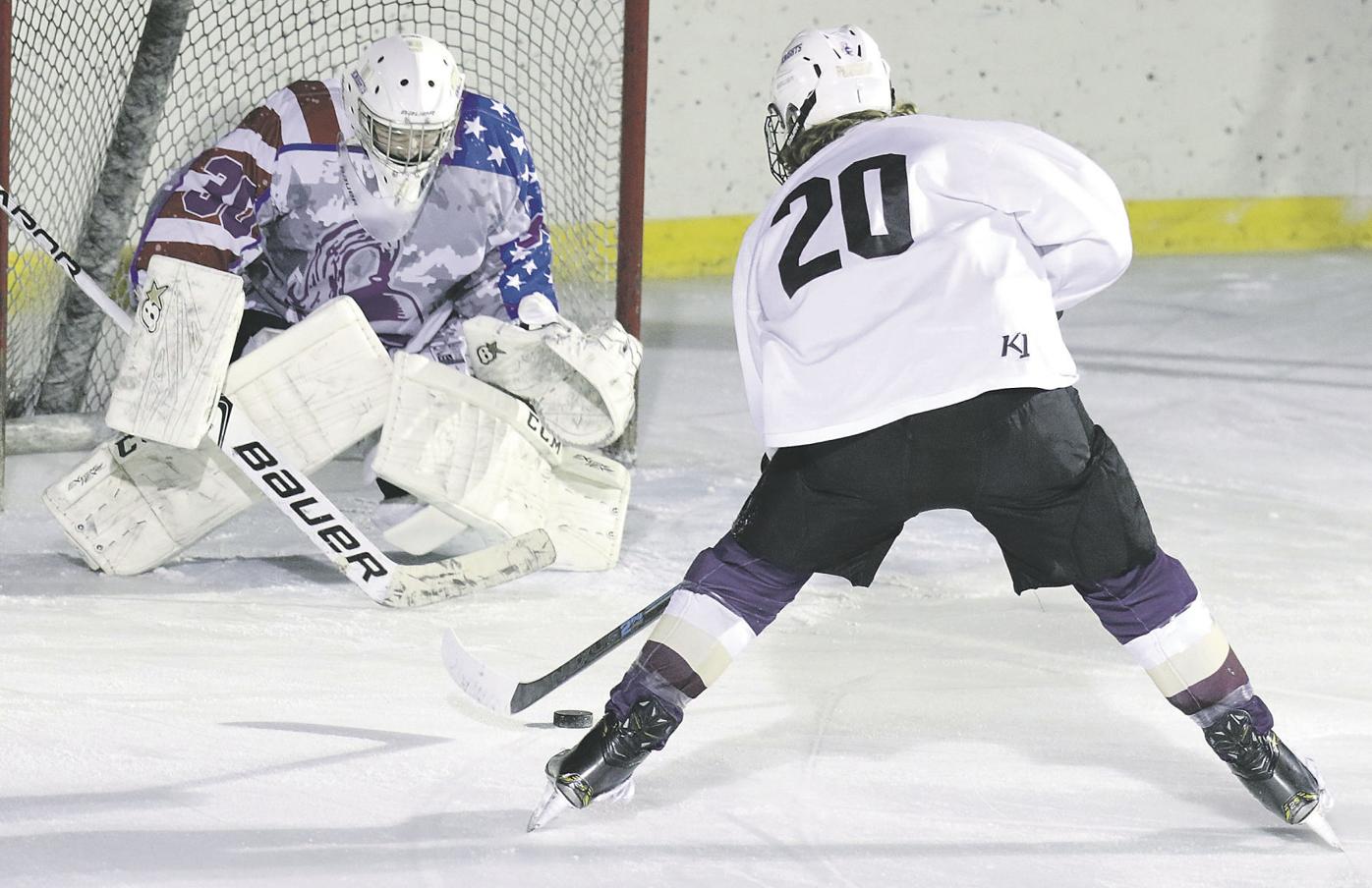 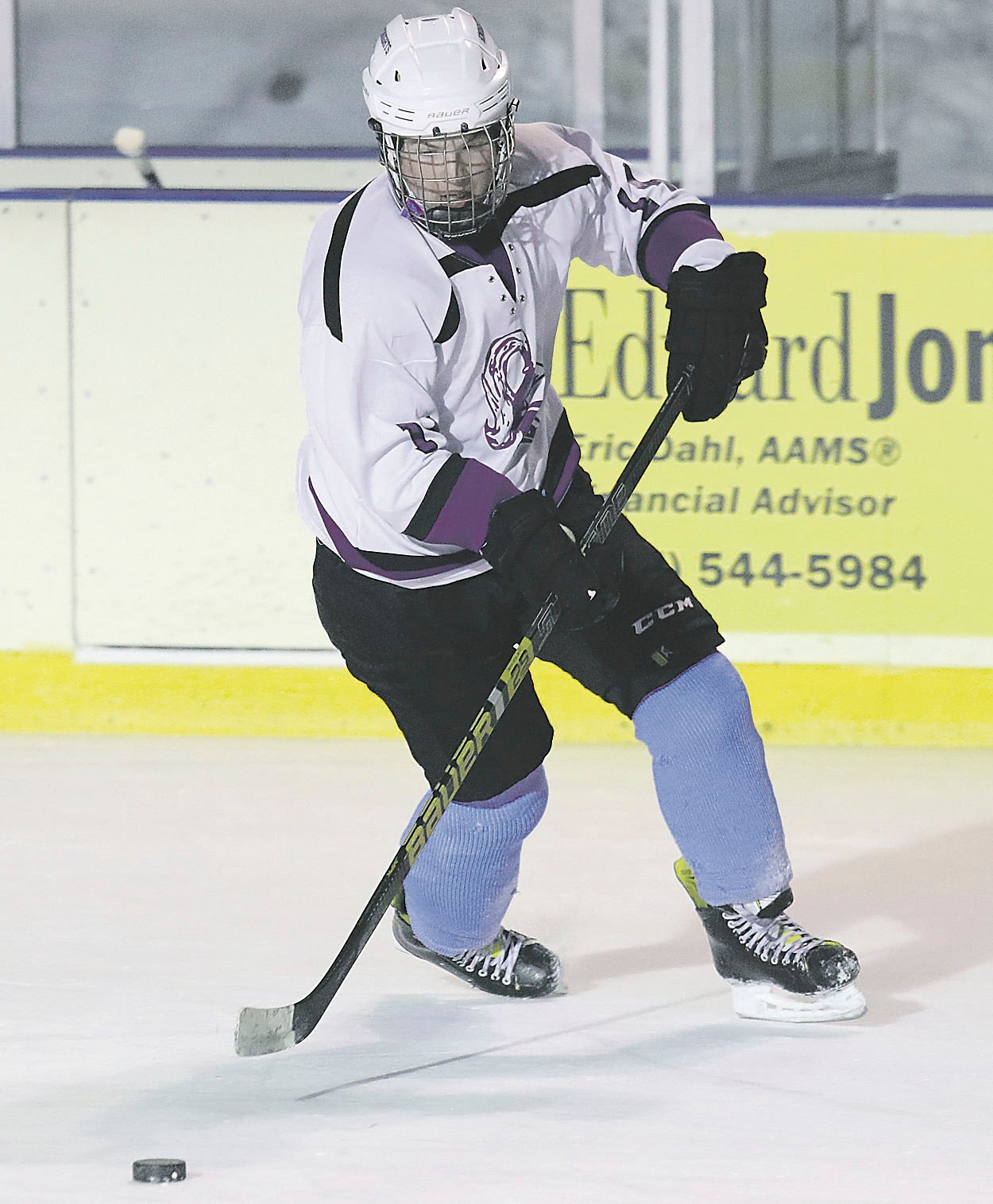 Senior Sean McCarthy participates in a drill during Wednesday’s practice for the BYHA high school team.

Senior Sean McCarthy participates in a drill during Wednesday’s practice for the BYHA high school team.

BELVIDERE, Ill.—For the young hockey players working up a sweat despite a 20-degree chill Wednesday night, skating on an outdoor rink at Doty Park was more than just a novelty.

It’s been a necessity. With Edwards Ice Arena closed due to COVID-19, the Beloit Memorial High School players have hunted for ice time wherever they can find it.

“It’s been a blast practicing out there,” senior goaltender Aidan Wright said. “It brings back memories of the morning practices we used to have when it’s freezing. It does take a toll on you, but as long as we’re playing, I guess everyone is happy.”

Competing as a WAHA high school age club team under the Beloit Youth Hockey Association umbrella, the Purple Knights have found it easier to schedule games than practices. The team has paid for ice time at the arena in Oregon as well as the Belvidere outdoor rink.

“It’s been tough with all the traveling, particularly when we have a rink right in Beloit,” Wright said. “Coach (Brian Jensen) talks about all the outdoor ice they once had (in Beloit) and the pickup games they used to be able to play with friends. We’ve been searching for ponds we can play on.”

The good news is that will change soon. The City of Beloit has decided to reopen Edwards Ice Arena Saturday. It will be for practice-only, at least at first, with safety protocols in place.

Surprisingly, despite playing much more than practicing, the Knights club team has made a great deal of progress.

“We’re not the most skilled team so we have to outwork teams on the ice,” Gavin Jensen said. “Last year was really difficult. We couldn’t pull it together. This year we’re playing differently. We know we have to bring our ‘A’ game all the time. Aidan (Wright) is playing crazy well and everyone on the team is stepping up so we can be competitive against anybody.”

Much of the credit should go to head coach Brian Jensen, who took over the club team and has kept the players cohesive and motivated.

“The team is responding well with chalk talks before and after games as well as in-game coaching,” the coach said. “It would be great to have had some practice on a normal basis. (Wednesday) night was just the second practice we had with assistant Chad Bishop and me on the ice.

“Overall, the kids are working hard and staying positive and there’s not much more a coach can ask for. It’s a fun group of young men.”

“Last year we were losing by four or five goals to these teams,” Gavin Jensen said. “I don’t know if they’re going down or we’re skating a lot harder. I know our seniors are working hard getting everyone to play to their potential. That part of it has been pretty cool to see, particularly with our limited practice.”

Wherever the team has played has had its own rules for combating COVID.

“It’s really awkward because some rinks allow no fans, some allow just parents and some have no restrictions at all,” Jensen said. “Every rink has required the players to wear masks. It’s difficult breathing hard into a mask, but you do what you have to do. I’ve tried four or five different types of facemasks. Every different game I see a new one that kids are trying. My first game, it really bothered me, but now I’m used to it.”

Adapting is something the Knights are apparently good at, flourishing in conditions a Beloit team hasn’t faced since the dawn of the “ice age” in the city with the construction of the rink at Telfer Park in 1981. They’ve been willing to make the best of a difficult situation.

For most, normalcy will eventually return even if it’s next season. For a senior like Wright, this is it. There are no do-overs. One of the Big Eight’s top goaltenders, he hopes to play hockey in college so this season has been particularly difficult on him.

“No one wants to come watch a club team play, so that makes it difficult, but fortunately, I’ve got a lot of connections and I think coaches know my reputation,” Wright said. “Hockey has been my passion my whole life so I’m going to stick with it and see where it leads me.”

Coach Jensen is convinced Wright will play after high school.

The mostly veteran team knows what it is missing not being able to play WIAA hockey.

“We would love to transfer to an actual high school season,” Gavin Jensen said “I think there is a slight chance we will. I just want to play high school hockey again. I love skating before school and after and then playing games in front of your whole town. It’s a super feeling.”

At least a significant step toward normal will be a return to practice at Edwards Ice Arena.