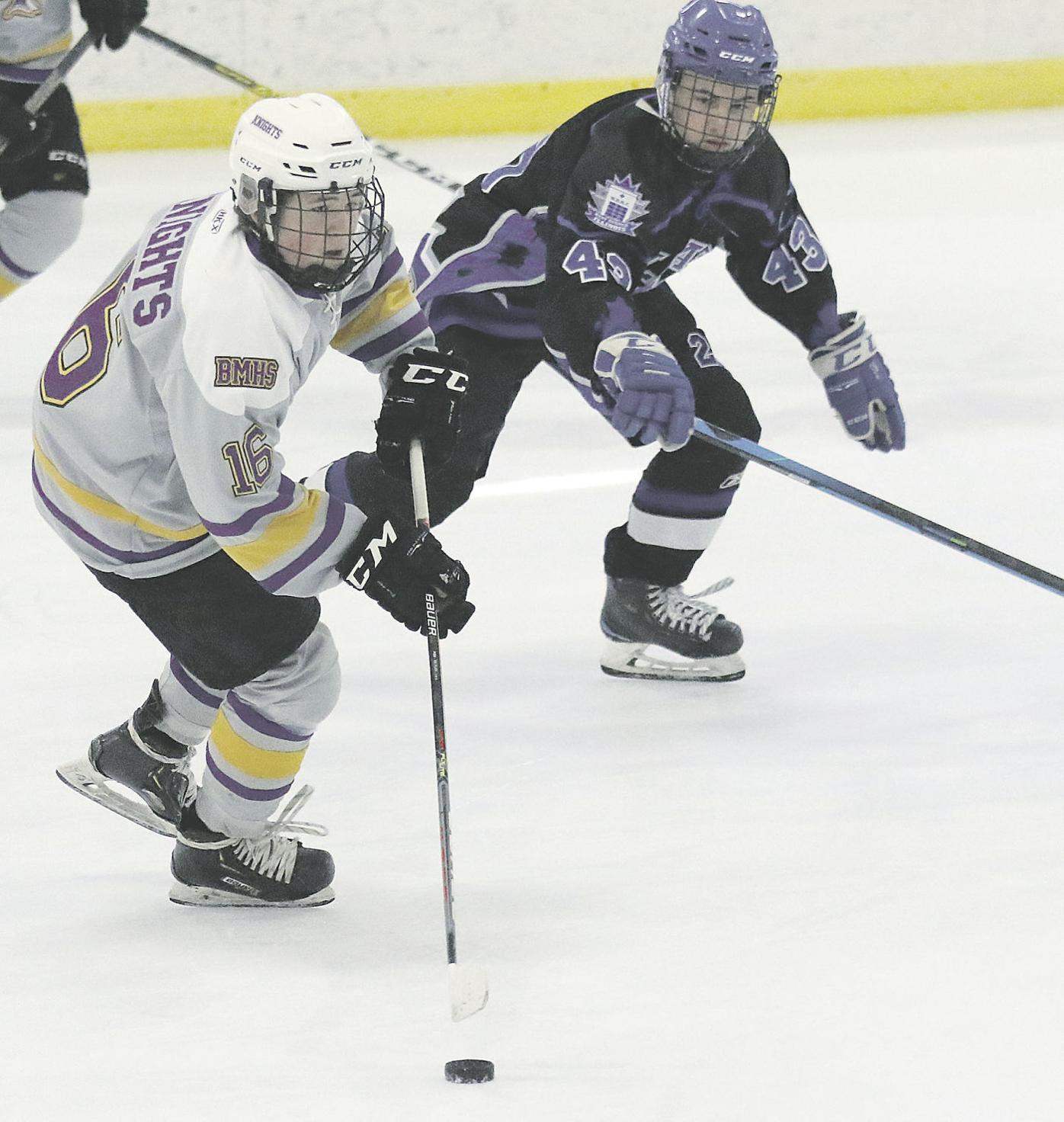 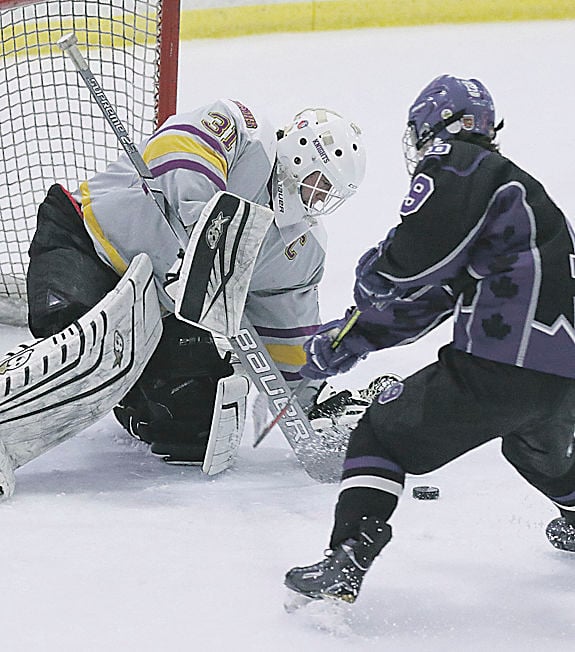 Before joining the junior ranks, goalie Aiden Wright was a wall on defense.

Before joining the junior ranks, goalie Aiden Wright was a wall on defense.

BELOIT—Thanks to COVID-19, the 2020-21 season was never going to be what the Beloit Memorial’s hockey team had hoped for.

The Purple Knights didn’t have the opportunity to play a WIAA season so they played club hockey through the Beloit Youth Hockey Association. Since high school head coach James Hoey couldn’t coach the club team, Brian Jensen took it on.

For most of their season, their home rink wasn’t even open for practice so they found ice time elsewhere, including an outside rink at Doty Park in Belvidere.

When they did play games, often at a moment’s notice, instead of large crowds they played before handfuls.

“We did this club thing to give our kids the opportunity to play,” Jensen said. “Kudos to Coach Hoey for supporting these kids every way he could. We also had a good group of parents who were really behind us. Melissa Badger, our team manager, did a great job finding games for us. We traveled wherever we had to in order to practice and to play. Hockey parents will do that for their kids. Whatever it takes.”

The Knights will wrap up their odd season this weekend when they play in the Kalamazoo (Mich.) Tournament.

“To be honest, I don’t know a lot about the teams we’ll be going up against, but I bet it will be another challenge for us,” Jensen said. “All in all, this season has already been a success for us. At the end of the season, we were able to get in a lot of practice. I think the kids learned from me. I pushed them hard in practice, like we were a WIAA team. I tried to conduct it like we were a WIAA team. They were still student-athletes.”

Jensen says the Knights would have fared well in the Big Eight if they’d had that opportunity.

“Verona was in a class by itself, but I think we would have competed very well with everyone else, particularly with our first two lines,” he said.

The Knights did have some growing pains.

“We were a team with varying skills,” he said. “We have a few kids who can really play and we have a lot more who need a lot more work.”

At the start of the season it was difficult to find the practice time for them to work on improvement. But through game experience and finally seeing ice time increase when Edwards Ice Arena opened up, there was a lot of progress. That was evident Saturday when they took a talented 18U team, the West Dundee Leafs, into overtime before falling 3-2.

“We were playing against mainly seniors and a couple of juniors,” Jensen said. “I thought we did really well. We’ve been able to post some big wins. We beat Waukesha 2-1 for the first time since probably 2012 and we beat a Madison Memorial/West club team, 3-2.

“We got big games from our goalie, Aiden Wright, our other seniors came through and some of the younger guys have done very well,” Jensen said.

The Knights’ best players include a pair of sophomores, Gavin Jensen (the coach’s son) and Connor Evans.

The Knights did receive a jolt about five weeks ago when their rock on defense, senior goaltender Wright, had the opportunity to join the roster of the Oregon (Wis.) Tradesmen, who are in their first season in the North American Tier III Hockey League (NA3HL).

“For three years, Aiden has carried this team game in and game out and it’s rough when he moves on to play junior hockey,” Jensen said. “Not having him obviously has been a big loss, not just in goal. He’s also a team leader off the ice. He was our captain and he commands respect.

“Fortunately Jameson Flanagan, Aiden’s cousin, stepped right in. He has done pretty well. He will probably be the starter next year, although there is a freshman coming up Erik Williams, who also has a lot of potential.”

• WRIGHT MOVES ON: Wright said his connection to the Tradesmen came through his goalie coach, Larry Clemens, who works for the Janesville Jets. The Tradesmen are a Tier III program while the Jets are Tier II.

“Larry is probably one of the best goalie training coaches in the Midwest,” Jensen said. “He’s phenomenal.”

Jensen said Wright has all the physical ability to succeed at a higher level.

“He has that 6-foot-5 frame,” the coach said. “He’s a monster. He has a lot of potential. He knows he has a lot of training to do this summer and it’s up to him to do it.”

“I’m practicing a lot and getting in games when I can,” he said.

As for his final season with the Knights, Wright said, “I think it came out better than I thought it might. We had some big games that were fun. We had some down games, too, but we stayed together and stuck it out.”

In the fall, Wright said he is looking toward playing more junior hockey somewhere.

“I’ve enjoyed the opportunity to play in Oregon and that might be an option again,” he said. “I think I’ll have several (options).”