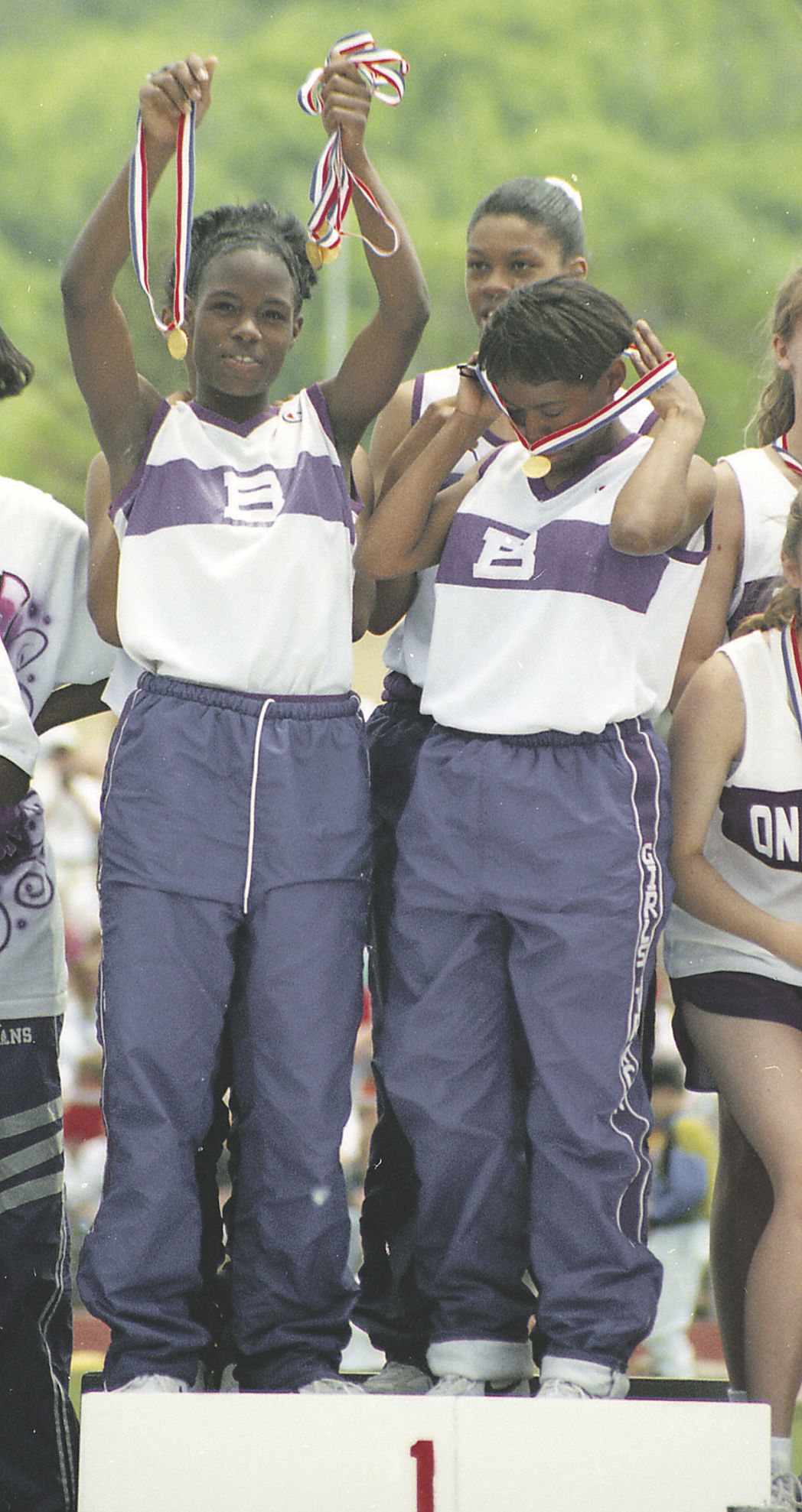 Clockwise from above, the BMHS quartet of Nakeesha Brown (raising medals), Latreese Cannon, Tara Thompson and Leslie Randle owns two area relay records; Amber Curtis of Brodhead has the best shot put and discus distances; Sophia Ponce of Hononegah has the top 200 and 400 and Eva Laun-Smith of the Purple Knights the best 100 hurdle time and triple jump distance. 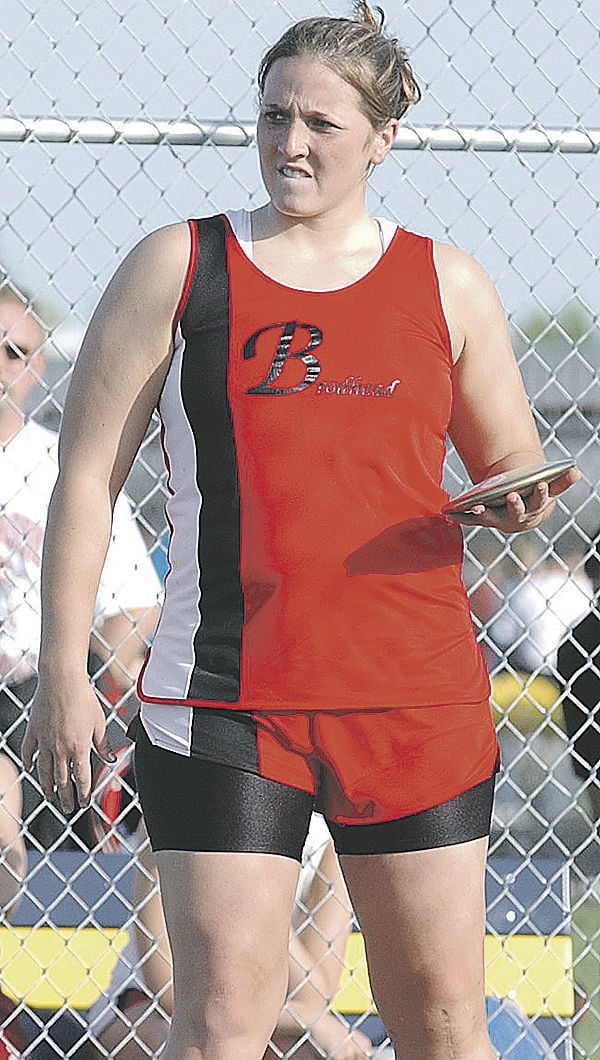 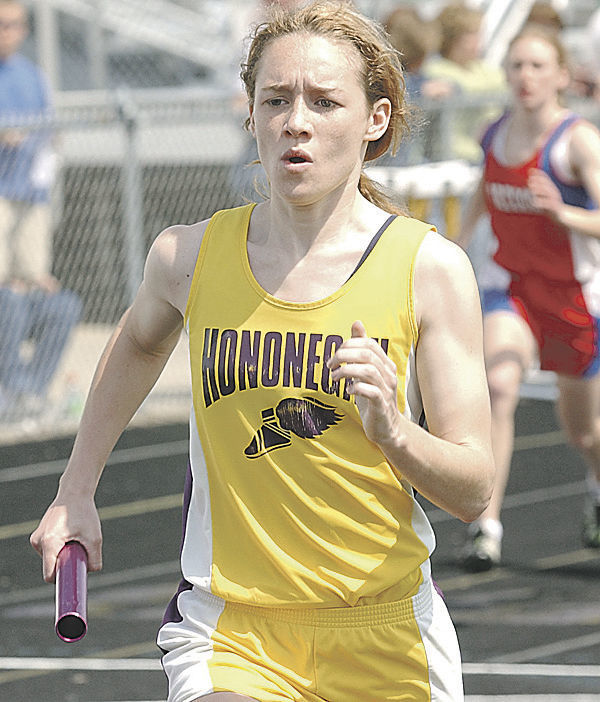 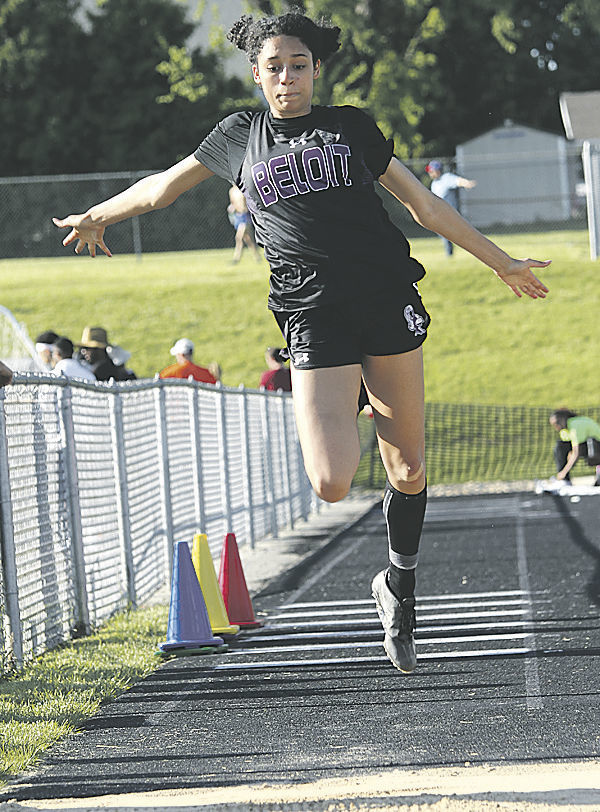 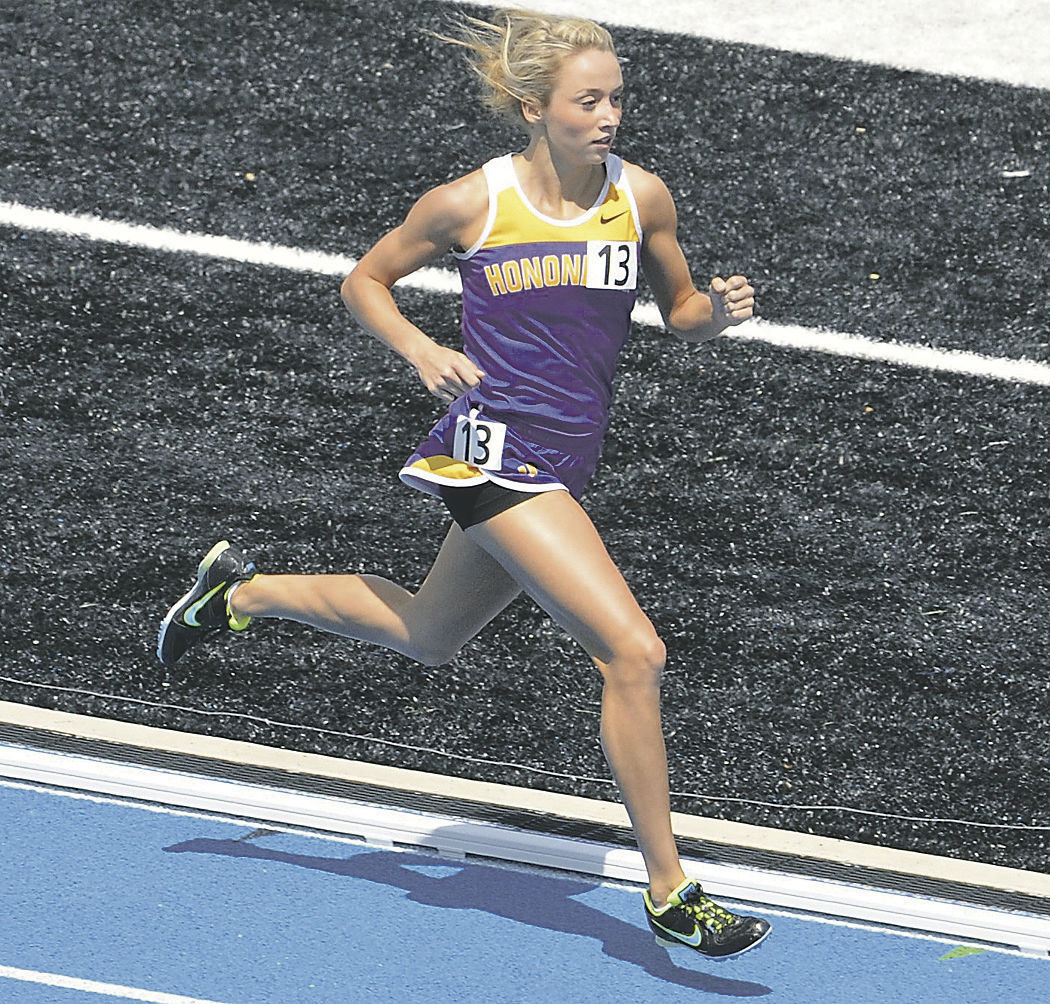 Clockwise from above, the BMHS quartet of Nakeesha Brown (raising medals), Latreese Cannon, Tara Thompson and Leslie Randle owns two area relay records; Amber Curtis of Brodhead has the best shot put and discus distances; Sophia Ponce of Hononegah has the top 200 and 400 and Eva Laun-Smith of the Purple Knights the best 100 hurdle time and triple jump distance.

If this were any other normal spring sports season, Clinton high sophomore Sylvia Johansen may already be the Stateline Area’s fastest female prep sprinter—ever.

Last June, the Cougar set a WIAA Division 2 record in winning the 100-meter title at UW-La Crosse in 11.95 seconds.

But for now, due to the Covoid-19 shutdown, Johansen will have to wait for another shot at being No. 1. She’s clearly already one of the best as we select our All-Time Stateline Area Girls Track Team, as we did recently with the boys.

Using statistics and subjectivity, here’s an event by event rundown:

• 100 METERS: To be honest, Johansen may already have a good argument that she’s flat out fastest. According to Beloit Memorial’s school records, flashy Felicia Carlson ran an 11.90. But that was a hand-held time not FAT (Fully Automatic Timing) at a meet at Turner when she was a sophomore in 2008.

In her online track profiles, you’ll notice Carlson is credited with a PR of 12.12 in the event because, for races under 300 meters, 0.24 seconds is added to the hand-held time, which is rounded up to the nearest tenth.

It’s safe to say both of these sprinters can absolutely fly and leave it at that. Carlson went on to star at Beloit College. She owns five individual school records there: 55, 60 and 200 meters inside and 100 and 200 outdoors.

Special mention: Hononegah’s Jessica Ponsey also ran 12.12 in 1999. The fourth-fastest time, 12.20, was set by Beloit Turner’s Kim Wolter in 1979. She battled knee problems or we may well be talking about folks still chasing her records.

Special mention: Jaliyah Elliott of Beloit Memorial, who just had a terrific indoor season for Youngstown State in 2020, recorded a time of 25.09 in 2015. Johansen is a threat in this event, too, after finishing second in the WIAA D-2 State Meet and posting a 25.2 time.

• 800: Another Hononegah standout, Courtney Clayton, not only put up the best time in the Area, she did it breaking Illinois’ oldest individual state record. Clayton ran 2:07.05 at Eastern Illinois as a senior in 2013 to finish 0.49 seconds ahead of the 29-year-old record. The two-time state winner in the event became an All-American at Vanderbilt.

• 100 HURDLES: Beloit Memorial’s Eva Laun-Smith posted a clocking of 15.16 as a senior in 2017. She has been remarkable for Beloit College. This past indoor season, she added two MWC titles to give her seven overall as she won Field Performer of the Meet for the third consecutive season. She qualified for the NCAA Division III Indoor Track and Field Championships in two events for the second straight year. She owns Bucs’ school records in the long jump, triple jump and 60 hurdles indoors and 100 hurdles, long jump and triple jump outdoors.

• 300 HURDLES: Beloit Memorial’s Yolanda Johnson, now on the University of Wisconsin roster, clocked in at 44-seconds. She and Hononegah’s Honesty Sandlin (45.27) are the only hurdlers under 46 seconds.

• 400 RELAY: Beloit Memorial’s Leslie Randall, Latreese Cannon, Tara Thompson and Nakeesha Brown put up a 48.73 in winning the WIAA State Championship in 1993.. A year later that same quartet was runnerup in 48.78. Brown and Randle had teamed with Renae Carter and Tiffany LeShoure to win the state title in 1992 at 50.12. Freshman Cannon stepped in to replace graduated LeShoure the following year and Thompson replaced Carter, who had transferred to Hononegah.

Special mention: The next two fastest times belong to Beloit Memorial foursomes. The team of Jessica Triplett, Camille Bittorf, Laurisha Rosario and Felicia Carlson had a 49.43 clocking. The quartet of Stephanie Sisk, Gabi Cepeda, Kelee Evans and Jamila Wynn ran 49.82 in finishing first at state in 2003. The unusual thing about that finish was that the Knights were seeded last heading into the finals and had the far outside lane, not exactly the prime spot for a champion.

Brown ended up with five golds and four silvers at state. She and Cannon flip-flopped as anchor runners in the 400 and 800. “You generally put your fastest runner in that position,” Brown said. “Latreese and I pushed each other a lot.”

• 1600 RELAY: Hononegah’s Patrice Jones, Amy DalSanto, Breanna Pierson and Nicky Althoff ran 3:56 for the fastest time and they did in the 2014 state finals.

• SHOT PUT: The neat thing about the two athletes who rank 1-2 in this event as well as the discus is that they competed against each other. Brodhead’s Amber Curtis and Clinton’s Kayla Schultz were so good they both went on to Division 1 careers.

Schultz was again bridesmaid until Curtis left and she took her turn on the top of the awards stand in 2004 with a career-best heave of 141-9.

• LONG JUMP: This one even predates yours truly. The best Beloit Memorial long jumpers I ever saw were Labreya Johnson, Alyssa Davis and Eva Laun-Smith. But none of them could top the school record of 18-11.5 set by Sonia Housley back in 1975. Wow.

Special mention. Johnson leaped 18 feet. The only others to do that are Hononegah’s Patrice Jones (18-07) and Brodhead’s Krista Johnson (18-0). Tracey Caradine holds Turner’s record at 17-05.5.

• TRIPLE JUMP: Here’s where Eva Laun-Smith posted her second Area-best effort with a leap of 39-10.5 in 2017, winning the WIAA D-1 title. She continues to shatter records in the event with the Buccaneers.

• HIGH JUMP: Beloit Memorial’s Chastidy Green has the best effort in the Area with a height of 5-9 in 1996.

Special mention: Two jumpers have reached 5-5, 30 years apart: Barb France of Turner in 1979 and Emily Buchanan of Clinton in 2009.

Special mention: Lots of hurdlers have reached 9-feet. The best so far is Brodhead’s Rhianna Teubert at 9-7.