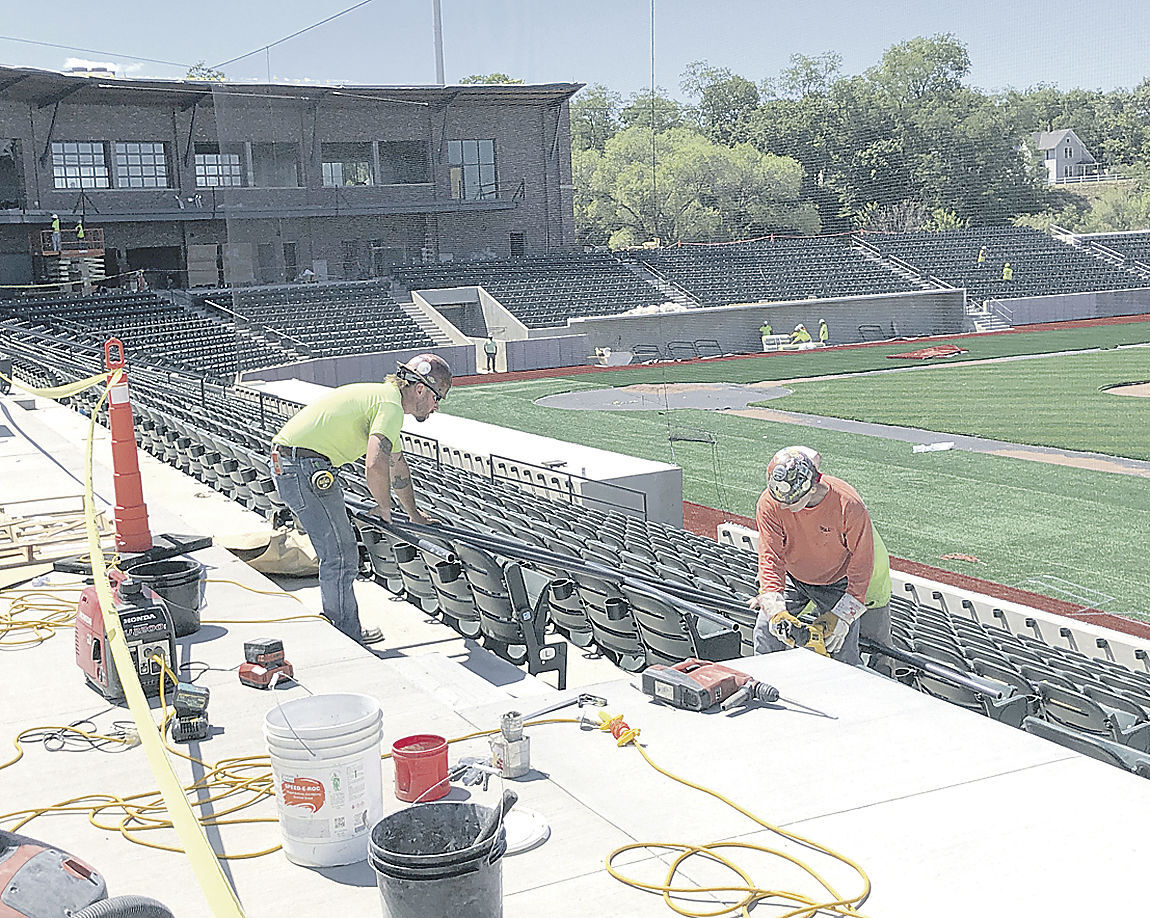 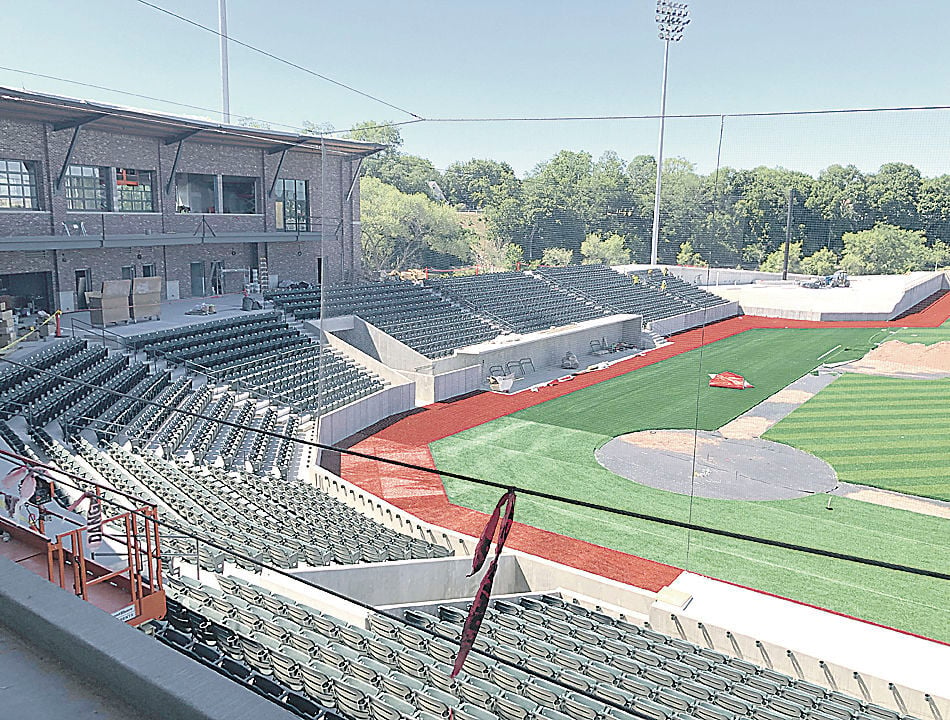 The artificial turf has been cut for the new stadium while the mound, batting area and basepaths will have dirt. 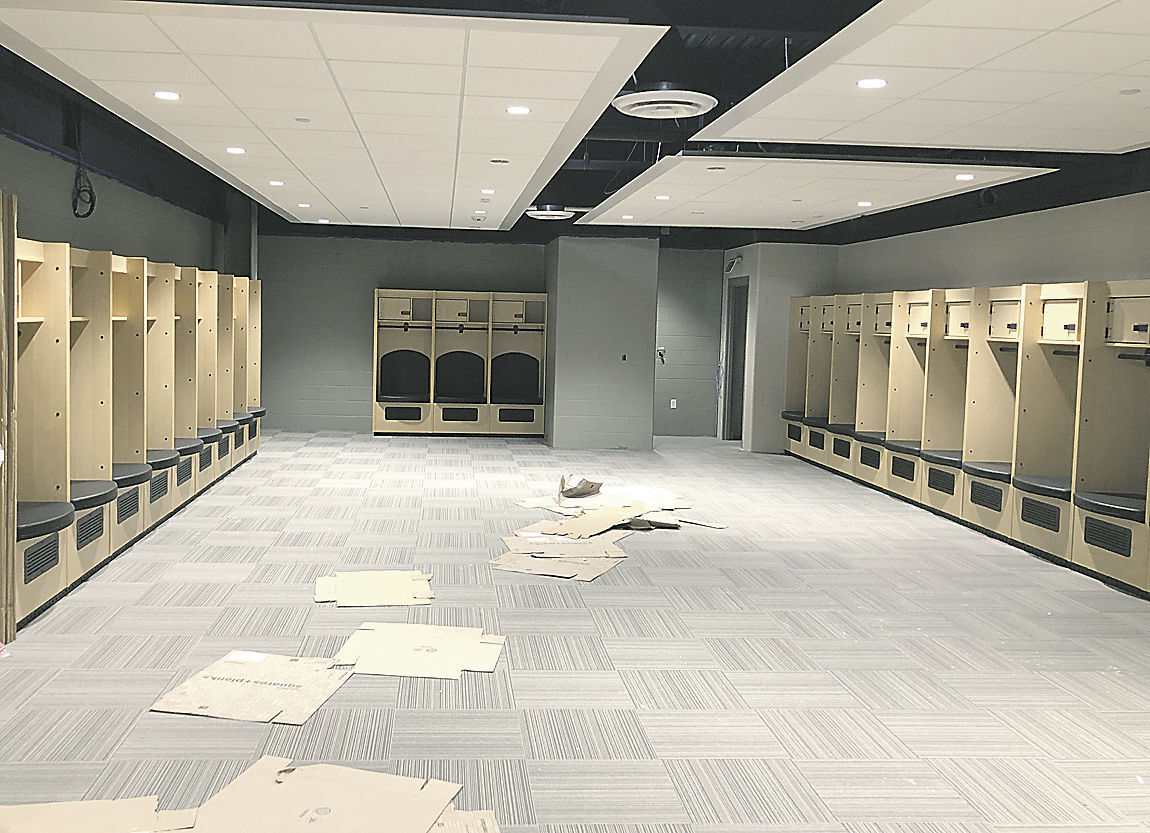 The Snappers’ home clubhouse will be much larger than the one at Pohlman Field. Actually, everything is larger than at the old stadium.

The artificial turf has been cut for the new stadium while the mound, batting area and basepaths will have dirt.

The Snappers’ home clubhouse will be much larger than the one at Pohlman Field. Actually, everything is larger than at the old stadium.

BELOIT—It isn’t generally considered ballpark food, but if there was a crow available, I’d guess I’d have to eat it.

A true skeptic when it came to the idea Beloit would ever find the resources to build a stadium that would prevent it from losing its minor-league baseball team, well, nothing is a bigger slap in the face than actually touring that brand new stadium.

Beloit Snappers Media & Public Relations Manager Brent Bartels offered to give the media the opportunity to walk around ABC Supply Stadium to see the progress of Pohlman Field’s eventual replacement.

Take my word for it, it’s breathtaking. For those who wondered if Beloit’s facility could ever approach Fox Cities Stadium or, heck, even the Rivets Stadium in Loves Park, never fear, this place will kick their butts.

It has a $30 millions pricetag with good reason.

“There really isn’t a bad place to watch the game in this ballpark,” Bartels said.

That’s covering a lot of places, too, thanks to a 360-degree open concourse which gives you a view of the action wherever you are.

Our informal tour began at the centerfield gates where we donned hard hats and bright vests. After all this is still very much a work zone.

While much of the landscaping around the park still needs to be imagined, most of the brickwork has been completed and gives the place the nostalgic feel of an older ballpark. An older ballpark with some amazing modern amenities, that is.

From the center field concourse, it’s clear that the playing surface is nearing completion. The artificial turf has been applied with the addition of volcanic rock placed under the warning track so outfielders will have a different feel under the turf and know they are approaching the wall.

There seems to be bale after bale of padding still to be unpacked which will go on the outfield walls soon. The home plate area, pitching mound and basepaths will be dirt. The same turf and dirt, Bartels points out, “that the Marlins have.”

Bartels said fans will have a myriad of choices of seating, from reserved seats, box seats, plushier home plate box seats and club level seats to table seating and standing room only along the concourse. The stadium will seat 3,500 fans, but the SRO will boost that.

Before reaching the first party deck to our left, Bartels pointed out that alongside the outer rim of the center field concourse the Snappers plan to make space available for a number of food trucks. Like fans will need more food choices beyond what is available at the four concession stands.

Both party decks on the left and right field sides are works in progress and awaiting table seats, but the areas are obviously spacious and will no doubt be popular places to pull up and enjoy a cold one. The left field deck will also have a playground eventually built adjacent to it.

We ventured down into a dugout and the first thing you notice is that both of Pohlman’s dugouts could easily fit into one of these. At the ends will be camera wells for both video and still photographers.

“The dugouts are actually larger than the ones the Marlins have,” Bartels said. “With COVID still on their minds, they felt it was important to have additional space.”

We went under the stadium to view the new clubhouses, workout areas, pitching and batting tunnels, offices for everyone from the manager, training staff and umpires to the clubhouse attendant and more storage than they probably know what to do with. It’s easy to get lost.

Up the stairs, with access by stairs or elevators, leads you to the pressbox, with rooms for visiting and home broadcasters. There is a souvenir/gift shop with large windows to view the game as well as on several flat screen TVs.

We took a look at the stadium’s impressive all-brick and glass facade along Shirland Avenue. Media will no doubt enter there with some limited parking on the Illinois side of the street.

“We could literally have a batter hit a foul ball into a different state,” Bartels said.

We also got to look at the indoor suites as well as the stadium club, a 5,000 square foot area which will be available to season ticket holders. It will also be available year-round for a number of purposes.

“We already have wedding parties contacting us,” Bartels said.

The tentative date for the stadium opening is Aug. 4, but the key word there is “tentative.” Even if it makes that deadline, there would only be a few series left to the regular season. The league was not expected to have a postseason, although Bartels said that is being discussed.

If it happens in August, great, but if it’s not until 2022 it will be worth the wait. There are a number of people who deserve congratulations for making this project come to fruition with Diane Hendricks and Quint Studor obviously at the front of the line.