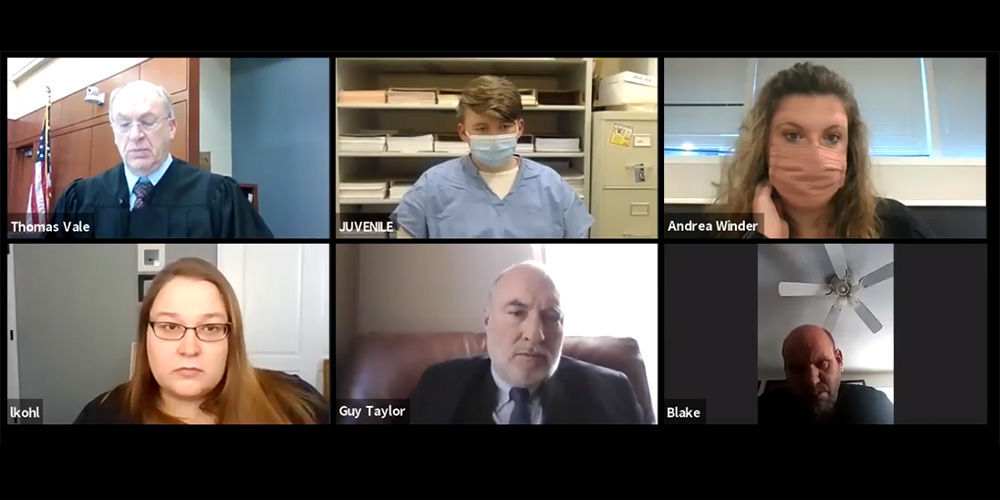 Logan T. Kruckenberg-Anderson, 16, of Albany, top center, attends a Green County Court hearing via video feed. He has been charged as an adult with first-degree intentional homicide and concealing a corpse in the death of his newborn daughter. 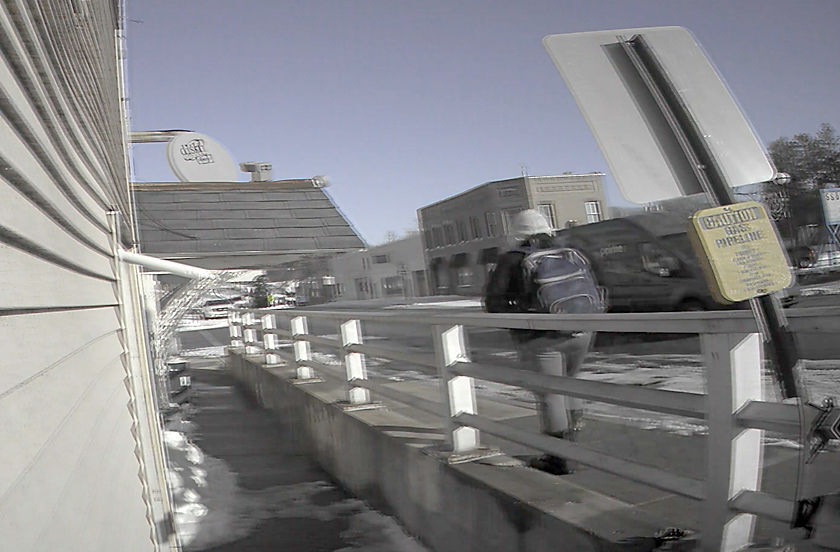 Authorities previously released this image of a person walking in Albany on Jan. 5 who is a suspect in the death of an infant. Prosecutors charged a teenage boy Tuesday with murdering the infant.

ALBANY, Wis.—A Green County teen accused of shooting his newborn daughter and leaving her body in a snowy woods was charged as an adult Tuesday with first-degree intentional homicide.

Logan T. Kruckenberg-Anderson, 16, also was charged with hiding the corpse of the child identified in the criminal complaint as a girl named Harper, who was born Jan. 5 and reported missing Saturday.

She had a gunshot wound in her head, according to the complaint. Kruckenberg-Anderson directed law enforcement to the body.

Kruckenberg-Anderson was arrested Sunday and is being held at the Rock County Juvenile Detention Center.

Guy M. Taylor, the public defender representing Kruckenberg-Anderson at his appearance Tuesday, said believes he will file a petition to have the case handled in juvenile court.

A girl in her early teens gave birth to Harper on Jan. 5 in a bathtub at her Albany home, and Kruckenberg-Anderson—the father—took the baby, according to the criminal complaint shared publicly by the state Department of Justice in a news release.

Kruckenberg-Anderson initially told authorities he met someone in a park and paid that person $60 to take the baby to an adoption agency in Madison, the complaint states.

But he later said he took the baby into the woods, left her in a snow-covered area and shot her twice in the head, the complaint states.

Kruckenberg-Anderson told authorities he and the mother decided they could not keep Harper. The criminal complaint says they discussed options, such as dropping off Harper at a local fire department or in Madison at an “adoption place.”

He then told agents from the state Division of Criminal Investigation and the FBI that he and the mother decided he would get rid of Harper by dropping her off somewhere, according to the complaint.

He then told agents that he walked a short distance into the woods and placed the naked baby in a small area inside of a fallen tree, according to the complaint. Harper began to cry, and he then placed snow over her whole body and walked away.

As he walked away, he could still hear her crying. This, he told agents, caused him to break down, fall to his knees and cry, the complaint states. He then left the area, knowing his baby was likely to die.

On Sunday, a state crime laboratory employee examined Harper’s body and found a gunshot wound in her forehead and a spent shell casing next to her body, according to the complaint.

Kruckenberg-Anderson said he shot her twice in the head, and authorities said they found a second spent shell casing in the backpack he used to carry Harper.

Wisconsin statutes say a parent may leave an unharmed newborn child—if the baby is less than 72 hours old—with a police officer, 911 emergency medical staff member or a hospital staff member.

This may be done “without fear of legal consequence,” according to the state Department of Children and Families website.