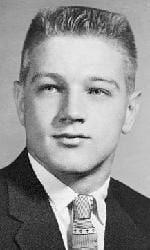 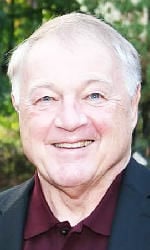 Beloit, WI -- James Jeffrey Kane passed away after a long illness on Monday February 10, 2020. He was born October 19, 1939 in Bloomington, IL the son of Owen and Marion Kane, little brother to Stephanie and "Big Tiger" to his younger sister Denise whom he affectionately referred to as "Little Tiger". He married the love of his life Patricia Ann Berberet on November 11, 1961. She predeceased him March 19, 2018. He joined her in heaven in time for Valentine's Day carrying a bouquet of daisies, wearing his Notre Dame monogram sweater, humming "The Day the Music Died". As a devout Catholic, loving husband, father and grandfather he leaves a legacy of great compassion, forgiveness and faith. Jim loved sports. He played every sport he could as a young person. Football became his passion at Trinity High School. He was notorious for his aggressive play and dedication, breaking up with Patty for football season every Fall. Taking advantage of opportunity, Jim attended the University of Notre Dame. A "walk on" to the football team and captain of the wrestling team he was a double letterman. He was very proud to be a member of the Monogram Club. He continued competing after college. He was a nationally ranked handball player, loved participating in triathlons all over the Midwest, and could find a way to turn anything into an event that involved brackets resulting in a winner. He loved being outdoors hunting or fishing, and creating a yard so green & thick, dandelions didn't stand a chance. Fall weekends were for traveling to South Bend to watch his beloved Fighting Irish. Jim grew up helping in the family business, delivering barrels of beer. No doubt this is where he gained his strength, honed his people skills and developed his taste for beer. He earned a Bachelors in Business Administration. Always looking for growth opportunities, his career took him to Indiana, California, Nebraska, Wisconsin and Illinois, finally planting roots in the Stateline Area in 1977. He and Patty grew their family through adoption along the way. He made moving to a new town an adventure with explorations of their new surroundings and an upbeat attitude towards trying new things. Their new hometowns always included a solid Catholic church & school and a YMCA. He believed very strongly in the importance of Catholic schools and was great support for Beloit Catholic throughout the 80s. Outboard Marine Corporation brought his young family to the Stateline and Regal Beloit kept him here. He retired in 2002 after two decades as a Vice President and General Manager of the Durst and Grove Gear Divisions of Regal Beloit. He always developed great affection for the people he worked with encouraging growth in them both personally and professionally. He always felt he missed his calling and should have been a coach. Our dad taught us kids to always feed the reindeer on Christmas Eve, that Banana Pancakes 101 was a class taught at Notre Dame, and that life wasn't easy. You must make the best of it and see the good in every person & situation. Accept the challenge to be better. Above all he taught us how to love. He deeply loved his family and was a fearless protector. He was the head coach; mom was his assistant and we kids were the team. The playbook included a strong faith in God & loads of family prayer, a plan to develop a sense of responsibility, gratitude, and family service projects to support people who were not as fortunate. "I love you", "I am proud of you", and "I am blessed to be your dad" were commonly said to us.

He will be missed by his children: Patrick & Donna Tarola-Kane of Sarasota, FL; Daniel & Zola Kane of Mercer Island, WA, their son Sebastian; Kari & Mark Santas of Beloit, WI, and their children: Jim, Ryan, Clare and Caroline Santas; Jen (Santas) & Matt Saelens and their son Jax; Matt & Sarah Santas and their sons Thorin & Kieran. In Bloomington he is missed by his sister Denise Kane, brother-in-law Roger Forrest and many nieces and nephews. There are also many friends throughout the country toasting his life. In addition to his Patty Ann, he was welcomed into heaven by his parents; in-laws Ed and Bernice Berberet; sister Stephanie Zang; his sisters-in-law Dolores Lockenvitz and her husband Ron; Regina Forrest; aunts, uncles and grandparents.

Funeral Mass of Christian Burial for Jim will be at 11 a.m. Saturday, February 22, 2020 in Our Lady of the Assumption Catholic Church, 2222 Shopiere Road, Beloit, WI. Visitation will be from 5 to 7 p.m. Friday, February 21, 2020 in the Daley Murphy Wisch & Associates Funeral Home and Crematorium, 2355 Cranston Road, Beloit, WI. Visitation will also be from 10 a.m. until 10:45 a.m. Saturday in the church. Burial will be in Mt. Thabor Cemetery.

Because Dad loved and believed in the power of youth sports, donations may be made at the following site in honor of his name. https://concussionfoundation.org/give-online Or mailed directly to Concussion Legacy Foundation, 361 Newbury Street 5th Floor, Boston, MA 02115.

Online condolences may be sent to the family at www.daleymurphywisch.com

Thank you to the staff at Cedar Crest for lovingly supporting us in caring for our Dad after Mom left us.

To plant a tree in memory of James Kane as a living tribute, please visit Tribute Store.