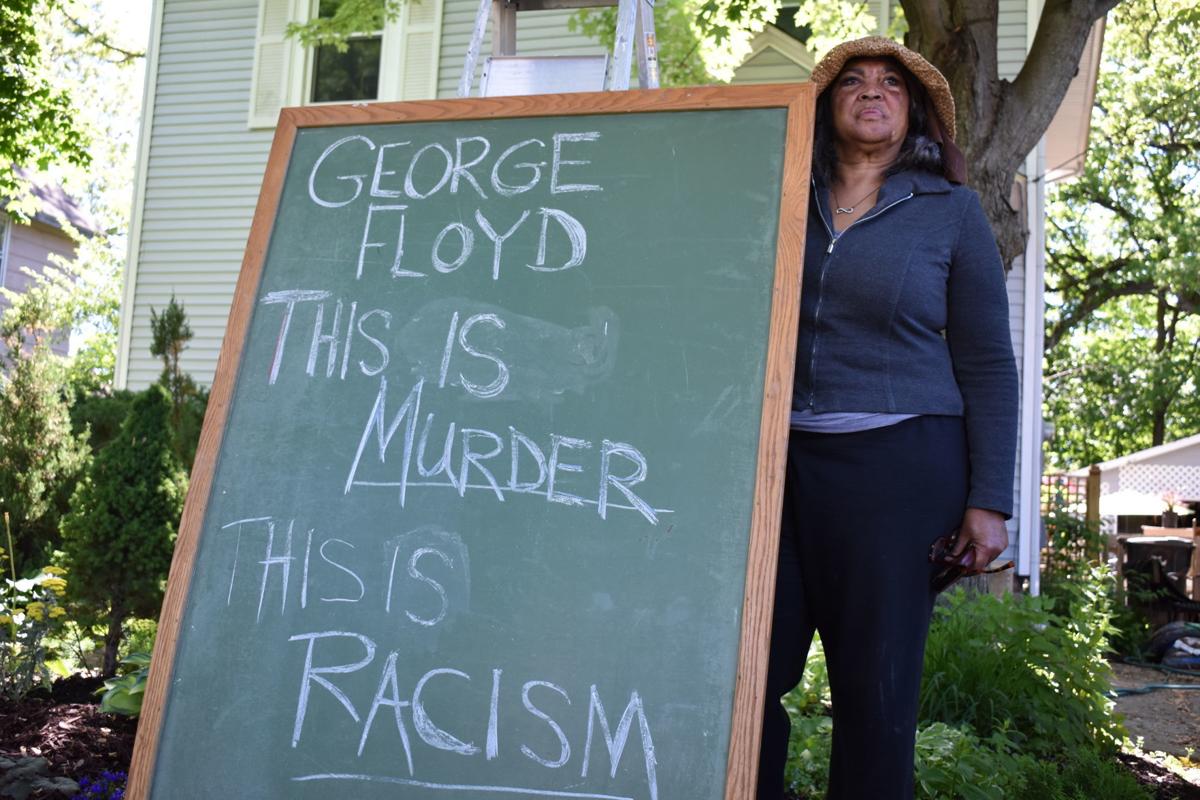 Linda Garrett-Foster put up yard signs at her home after the killing of George Floyd and to show solidarity with those marching. 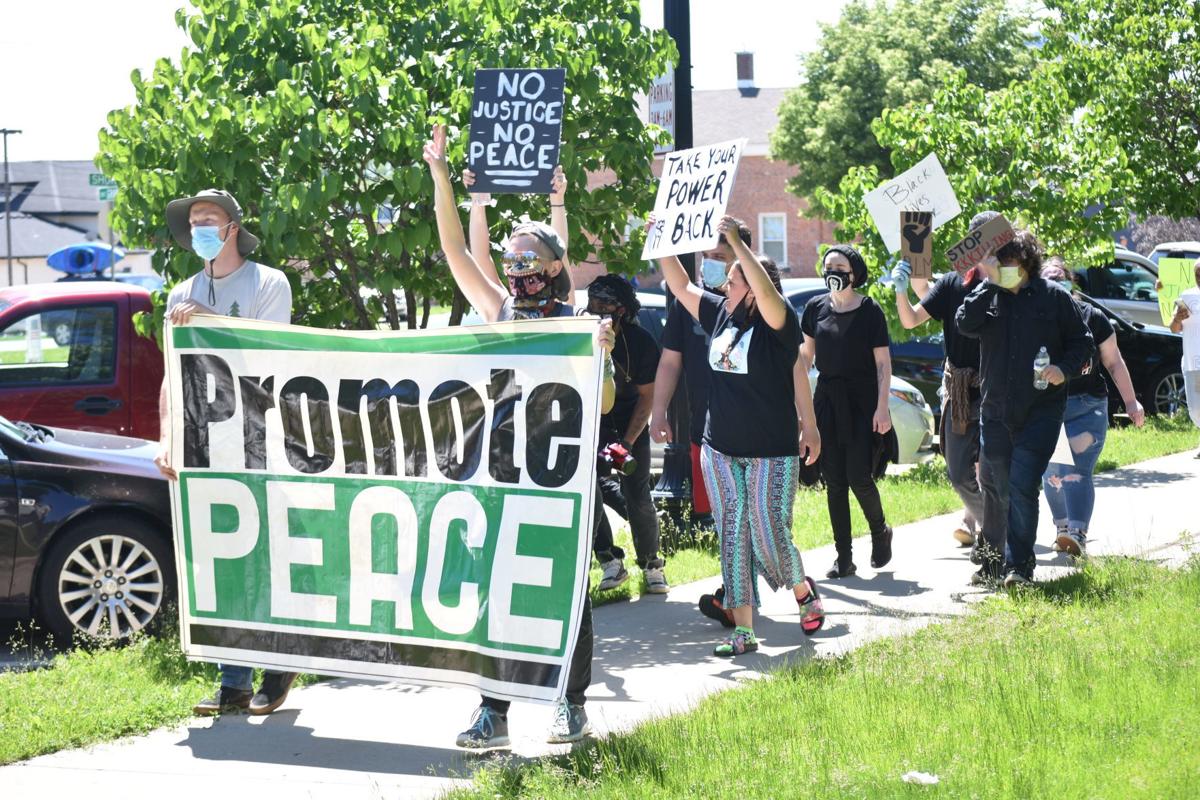 The Showing up for Racial Justice March attracted hundreds of people who peacefully marched around Horace White Park on Sunday afternoon. 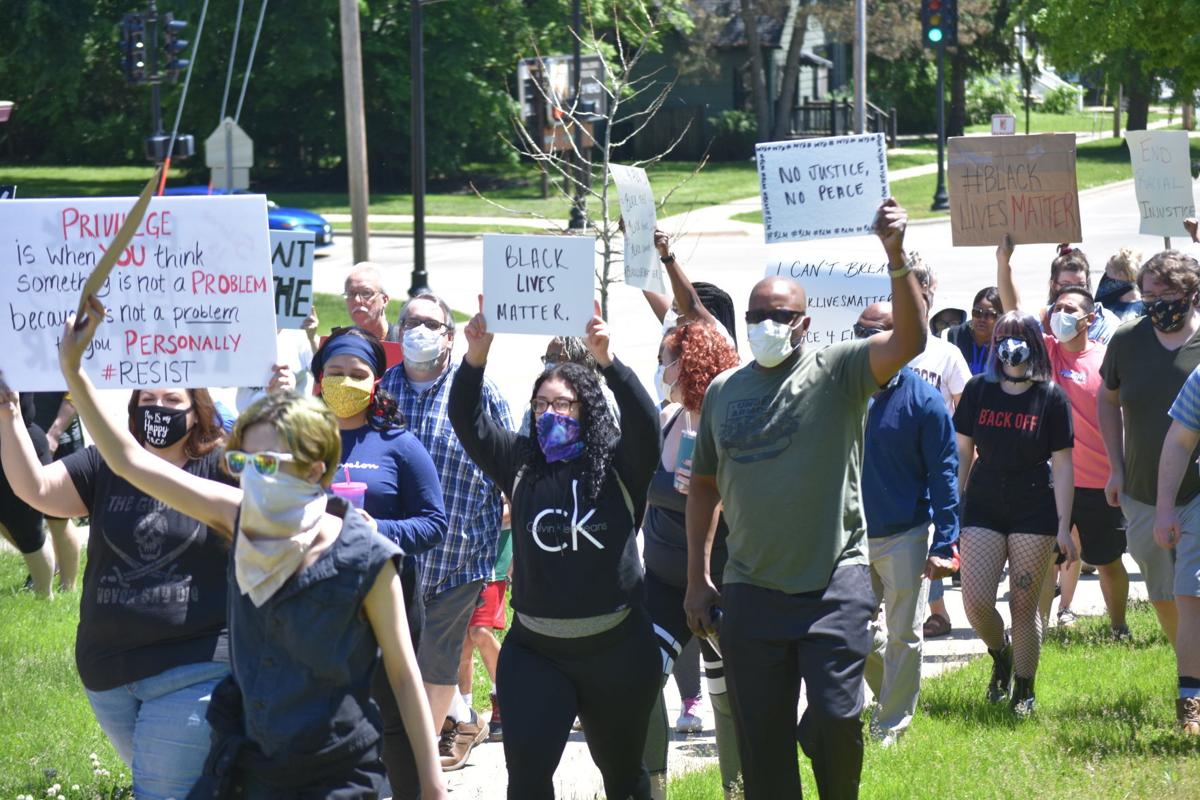 Linda Garrett-Foster put up yard signs at her home after the killing of George Floyd and to show solidarity with those marching.

The Showing up for Racial Justice March attracted hundreds of people who peacefully marched around Horace White Park on Sunday afternoon.

BELOIT — Horace White Park was filled with hundreds of people standing against racial inequality and injustice on Sunday afternoon.

Hosted Showing Up for Racial Justice (SURJ)-Beloit and Beloit Together—An Indivisible Group, the Showing up for Racial Justice March included speakers as well as supporters with signs saying “Black Lives Matter” and “We all bleed the same.” As marchers made four laps around the park for the four officers associated with the death of George Floyd in Minneapolis, a simultaneous vehicle parade ensued around the park perimeter with car horns honking and cheers from participants.

The officially sanctioned event stayed in the park, although some protesters later made their way downtown and some were chanting outside the Beloit Police Department as vehicles slowly filled the police department parking lot, honking horns and playing music.

Leavy said it’s OK for the global majority (blacks, people of color and indigenous people) to not be OK and to practice self care right now.

She invited those not members of the global majority to consider being an ally.

“It’s not a badge you flip on. It’s a lifelong commitment to lasting relationships with honesty and accountability with marginalized people or groups. Don’t be colorblind. Not acknowledging my color diminishes my experience. Ally-ship requires a self awareness of the power and the privilege you hold. I need you to use that privilege to speak up for marginalized people,” Leavy said.

Michael Bell, of InTouch Outreach, said racism originated from fear which led to hate. The founding fathers were afraid minorities would take positions of power from them. Racism, he said, is systematic with built-in memories and laws. He said the problem is bigger than the police officer who killed Floyd.

“Racism is a health problem. It causes too many negative attributes within ourselves,” Bell said.

Former Beloit school board member Tia Johnson called for a revolution. She said she didn’t understand why people were protesting so forcefully after the Rodney King beating. Nearly 30 years later she said she has realized the protesting is more than a response to a murder, but a response to the modern day lynching of a black man.

“These actions are a demand for change,” she said.

Beloit Together Organizer Megan Miller encouraged people to join SURJ-Beloit. It will have a virtual Facebook meeting at 7 p.m. on June 15.

It’s designed to help white people partner with the community of color to learn how to be anti-racist.

Those who attended the protest came for a variety of reasons.

Arlethis O’Dell of Beloit said “her father in heaven” brought her to the event to pray for peace.

“I love people no matter what color,” she said.

Beloiter Paris Miller said he wanted to support the Black Lives Matter movement. He had been in Milwaukee to a protest on Friday and was going back again. He said the Milwaukee protests were peaceful during the day but got a bit hectic at night. Despite it all, he saw the marches and protests as a great opportunity for a revolution. He said there needs to be better police training, more diversity in police ranks and more accountability.

“It’s like being born with a target on your back,” Paris Miller said.

In an interview prior to the march, Linda Garrett-Foster, explained why she had put up yard signs to stand in unity against racial injustice. She is the mother of three sons and a grandmother as well.

Garrett-Foster said all citizens of all colors need to be vocal, stand against racism and begin contacting their legislative bodies in a more active way.

“I’m standing with the family, friends and all people who recognized the injustice against Floyd,” Garrett-Foster said.