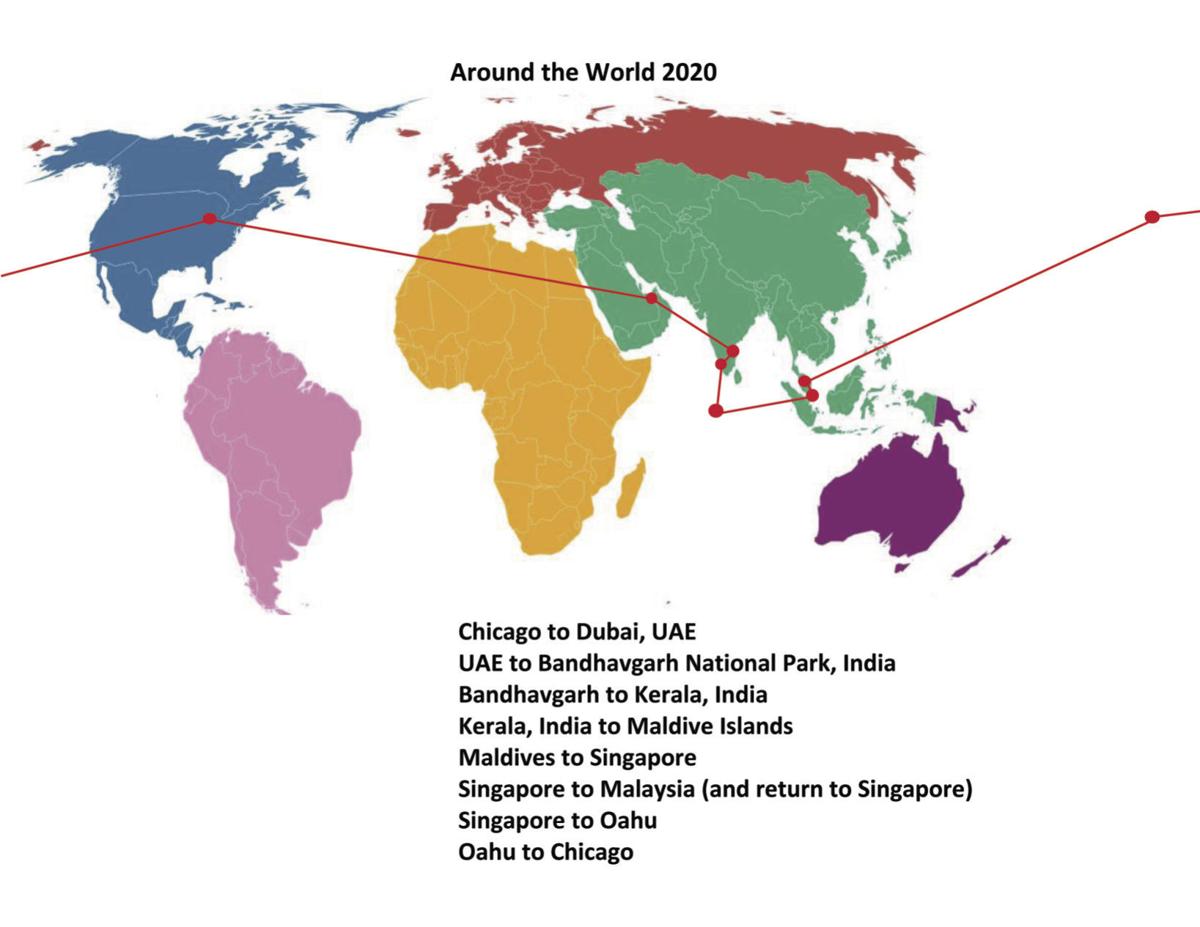 This shows the travel path the Sveums took. 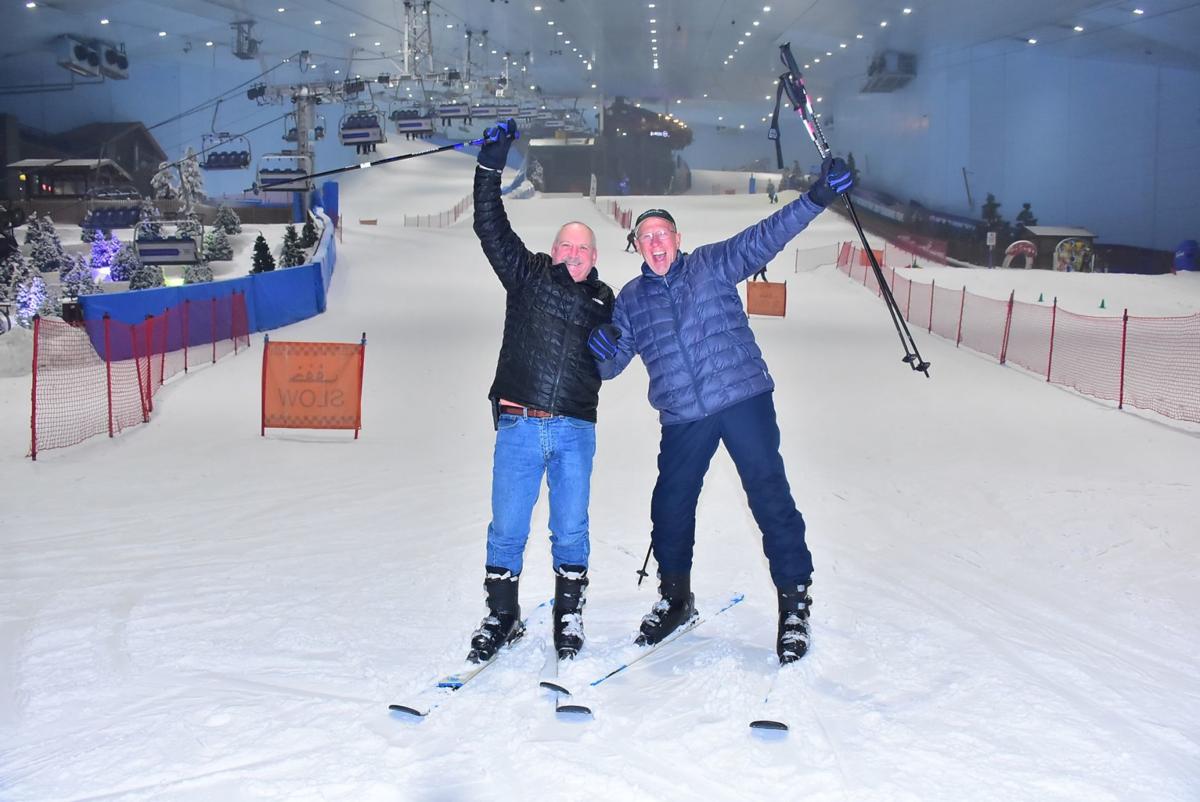 (From left): Terry Berge and Jerry Sveum celebrate the excitement of indoor skiing in the desert city of Dubai, United Arab Emirates. 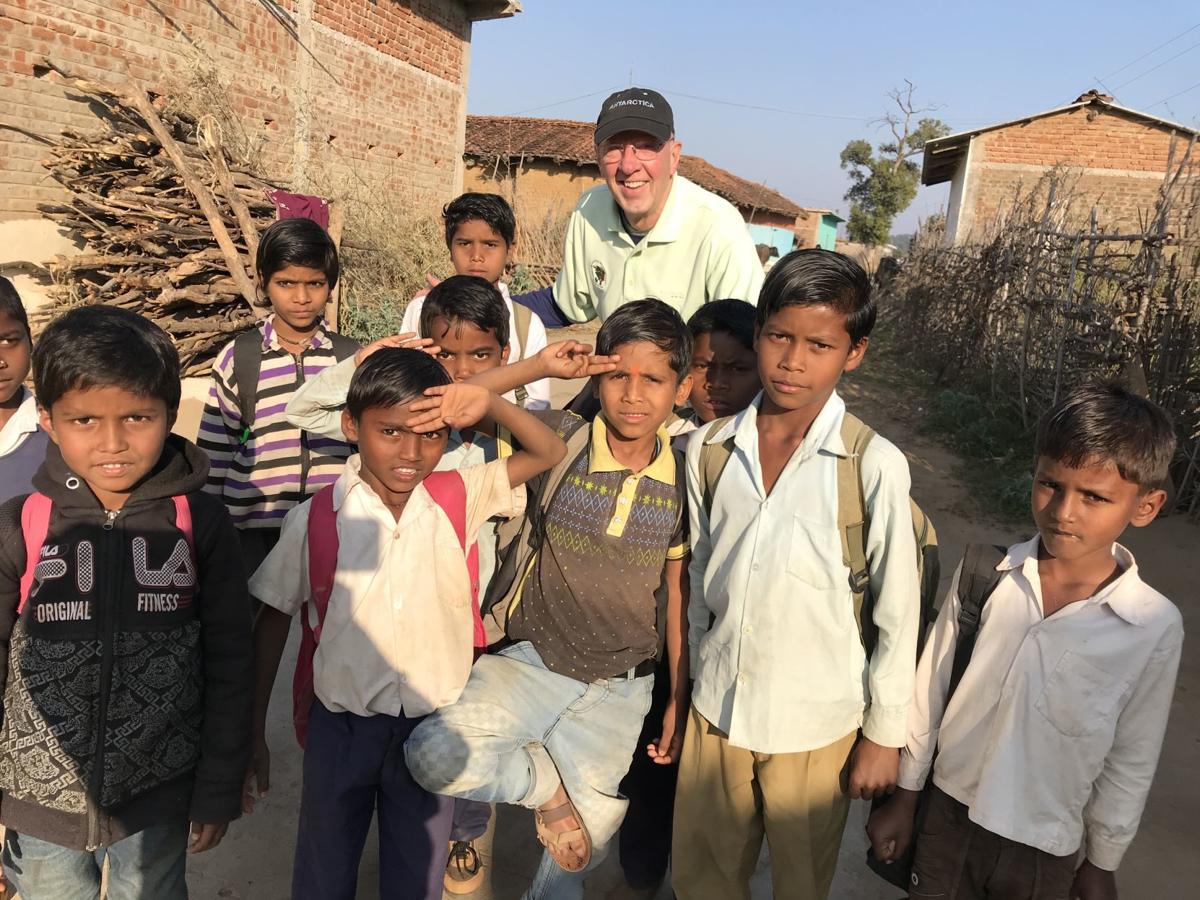 Jerry Sveum is shown with an entourage of school children on a tour of a local village outside Bandhavgarh tiger reserve in Madhya Pradesh, central India. 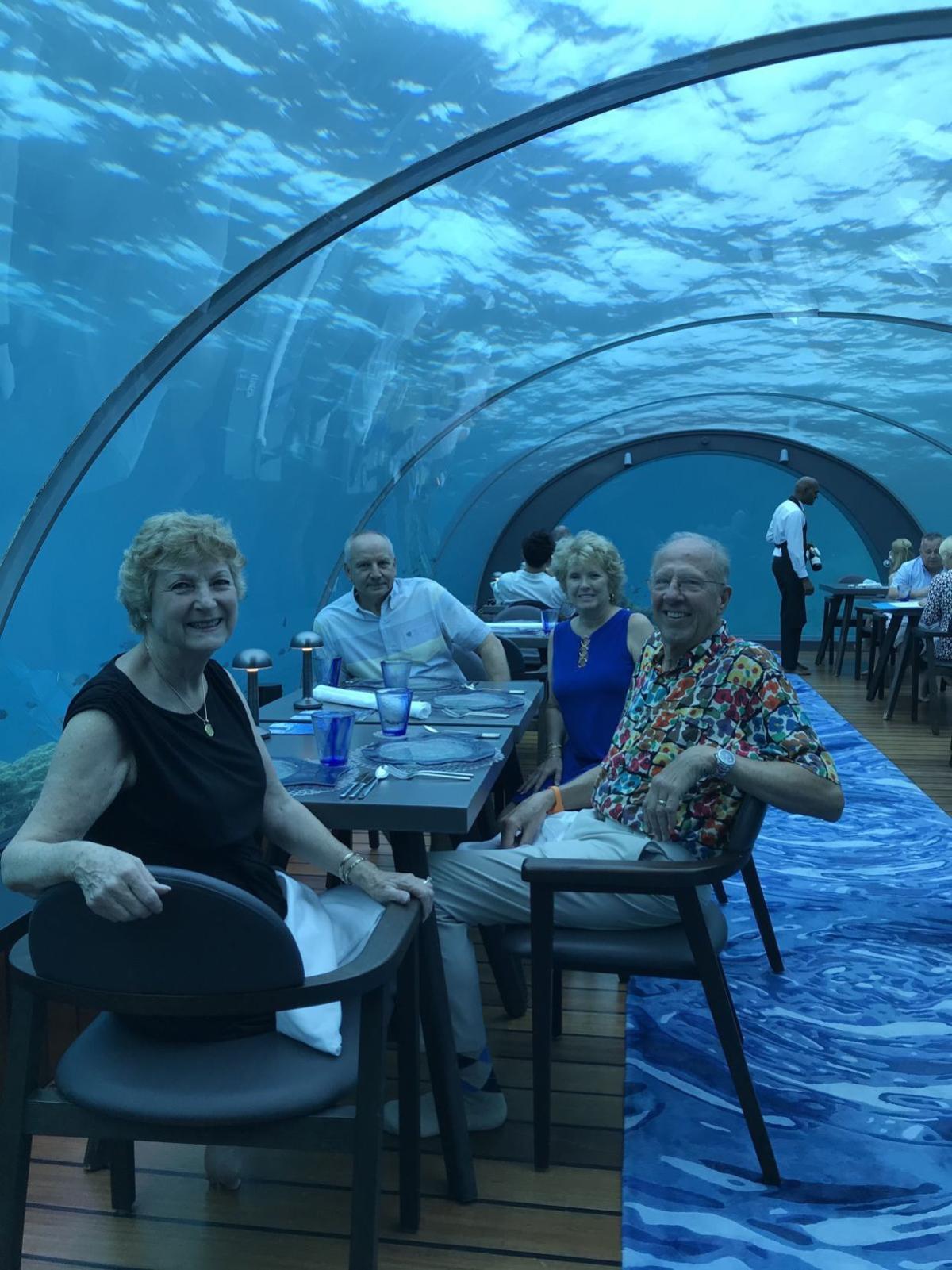 Connie Sveum, along with former Beloiters, Terry and Cheryl Berge and Jerry Sveum are shown having dinner at the amazing Ithaa Undersea Restaurant on Rangali Island in the Maldives. Ithaa means mother-of-pearl in the Maldivian language, Dhivehi. 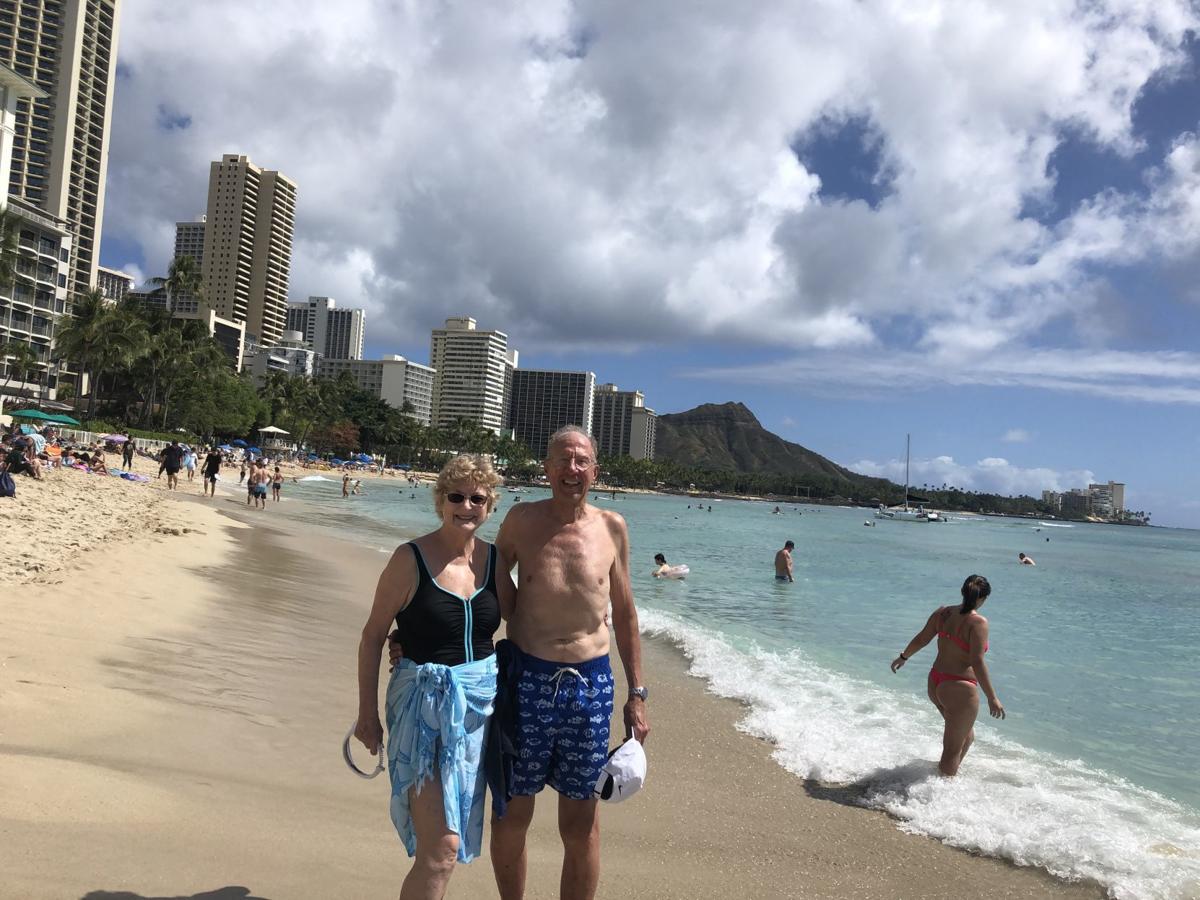 Connie and Jerry Sveum break up their long flight home with a stop in Honolulu for some beach time, and a visit to the WWII Pearl Harbor Memorial.

This shows the travel path the Sveums took.

(From left): Terry Berge and Jerry Sveum celebrate the excitement of indoor skiing in the desert city of Dubai, United Arab Emirates.

Jerry Sveum is shown with an entourage of school children on a tour of a local village outside Bandhavgarh tiger reserve in Madhya Pradesh, central India.

Connie Sveum, along with former Beloiters, Terry and Cheryl Berge and Jerry Sveum are shown having dinner at the amazing Ithaa Undersea Restaurant on Rangali Island in the Maldives. Ithaa means mother-of-pearl in the Maldivian language, Dhivehi.

Connie and Jerry Sveum break up their long flight home with a stop in Honolulu for some beach time, and a visit to the WWII Pearl Harbor Memorial.

BELOIT — Connie and Jerry Sveum are known as being worldwide travelers. Perhaps a better description would label them as worldwide adventurers. Their trips are much more than sightseeing excursions, but rather, experiences.

Earlier this year, the two retirees (Jerry, a former pharmacist, and Connie, a nurse) took a three week trip to circumnavigate the world. This venture, which began Feb. 7, leaving from Chicago, involved 13 flights and featured visits to six countries (seven if you include a stopover visit).

Four of the countries were new to Connie and Jerry, adding to their world wide trip tally of 101 destinations visited for Jerry, and 99 in total for Connie.

Traveling with the Sveums were Cheryl and Terry Berge, former Beloiters who now reside in Charlotte, North Carolina. The couples first met through the Penguin Club, and that friendship continues as they have become frequent travel companions.

For this adventure, the planning was managed by Connie and Cheryl.

“We cherry picked the places we wanted to see,” said Connie, who has developed a very sophisticated spreadsheet system to plot and plan their travels, keeping track of all the details involved.

A unique river cruise in a converted rice boat was the inspiration for the trip, and the rest of the busy itinerary was developed around that.

“We cram a lot into our trips,” Jerry said.

The first leg of their journey involved a 13-hour flight to Dubai.

“Dubai is a beautiful destination city,” said Connie. “Here you can see the tallest building in the world, the Burj Khalifa, a needle like structure.”

They enjoyed a tour of the city by helicopter and had a bird’s eye view of the man-made islands created to look like a palm leaf, or sea horses or the world, respectively.

“The work on the island is on-going,” said Jerry, “due to continuously blowing sand, the shoreline is always eroding.”

Dubai also features unique architectural building designs, developed by a number of different architects each creating their own signature pieces. Connie mentioned in particular a building designed to look like a picture frame, with the center completely open.

“This desert nation has so much money that they built a ski hill indoors. It was a hoot!” said Connie. According to Jerry, “It could be 120 degrees outside and you could still ski inside.”

During their two and a half day stay in Dubai they enjoyed a cocktail on the top of the Burj al Arab, a seven star hotel where they were treated like royalty.

The next stop was Bandhavgarh National Park in India, where they experienced unique sleeping accommodations in a tree house. Access was via a 15-foot circular staircase up into a Banyan tree.

“Here we were, all by ourselves in a treehouse. It was charming,” said Jerry. “There was a heater in our room,” added Connie, “but it was a little cold in the bathroom.”

Before they could actually check in to their treehouse accommodations, Sveums opted for a delightful side trip to a local village where they witnessed women painstakingly making adobe bricks one at a time. A walk through the village found them accumulating an entourage of students just out of school who surrounded them wanting to make use of the English they had learned, taking pictures and then seeing the pictures.

Part of the trip adventure also involved sampling the local cuisine, which tended to be a bit spicy, but still enjoyable.

“One of the reasons we enjoy travelling is because it makes you grow as a person as you meet other people and learn from their culture, and that includes trying the food,” said Connie.

On the itinerary schedule was a Tiger Safari, where Connie shared that the only shots taken on this safari were photographs.

“We saw tigers on every drive,” she shared. “Tigers are lone animals in India, but sometimes you might see a mother with her full grown cubs who were not quite ready to be on their own.”

The Sveums were delighted with their tour guide/driver who prompted them to rise early in the morning so they could be the first in line when the park opened. For that effort he rewarded them with wool ponchos and hot water bottles to keep them warm.

“We felt perfectly safe,” said Connie. “Tigers don’t approach vehicles, but you don’t want to step out of one,” added Jerry.

Next their journey continued to Kerala, India, where the couples experienced a two night cruise on a converted rice boat along the backwaters of Kerala. The boat was designed to provide two rooms of lodging for the Sveums and the Berges, as well as a crew of three, who handled that water navigation and food preparation.

The waterway transportation provided a unique perspective of the countryside.

“We watched people working in the rice fields, a man tending hundreds of little ducklings, and fishermen,”

Meals provided another dining adventure with the chef preparing all local cuisine served on banana leaves, which were used as plates.

On to the Maldives, a nation of islands in the Indian Ocean, where the average elevation is only 4 feet above sea level. Our travelers described this as a great scuba diving destination with powdered sugar beaches. While staying in a large resort, their cabin was located on the beach, with an open air bathroom, shower and sink.

And just like the Galloping Gourmet, here the foursome traveled to a private island by boat, where they had dinner reservations at an underwater restaurant. This dining destination was accessed by a long pier, ending with a stairway that led them down to the restaurant. From their underwater vantage point they viewed a sunken Maldivian boat adorned with a snakehead, which created a man made reef. A sumptuous repast of a five course gourmet meal was served accompanied by wine pairings.

It was during their stay in the Maldives that the Sveums were first learning about the global impact of the COVID-19 virus. Connie shared that the trip had been planned since last June, and completely paid for. They heard the first references to the virus in January, so they took masks along.

Next stop was Singapore, with the world-renowned botanical gardens as a focal point of this stop, not to mention a stay at the beautiful Marina Bay Sands hotel. “This hotel was incredible,” remarked Jerry. “It had an infinity pool a hundred yards long and many wonderful restaurants.”

It was in Singapore that the reality of the Coronavirus and its impact was being felt, with 89 confirmed cases reported by the time they arrived Feb. 24. While there was some business shutdown, the entire city was reacting by controlling foot traffic, directing the flow through a reduced number of entrances. Equipment was used to monitor temperatures remotely, and people were directed to report any symptoms.

Jerry ventured out on his own one day to visit an art exhibit at a local bank. His temperature was taken and then written on a sticker that could be worn as a public display of his status. “In one day I had my temperature taken 6 times,” Jerry reported. To the Sveums, Singapore seemed to be on top of the situation at that time.

While in Singapore, the travelers made a day trip to Malaysia to see the Glass Temple, a unique, glass covered Hindu Temple boasting an ornamental interior with mosaics, statues and murals.

As their trip was coming to a close, leaving Singapore, the travelers had a layover in Taipan. Reality was setting in as 90 percent of the travelers in the airport were wearing masks. (They attributed this to Taipan’s proximity to China.) As they watched the flight boards, they witnessed flights being cancelled before their very eyes, and so they were hoping they could get off the island before their flight was cancelled.

Fortunately, they were able to fly into Honolulu for a two night stay to help break up the long flight home. Here the Sveums noticed they were the only people wearing masks at the airport. Beaches and pools were still open, and they were able to visit the WWI Pearl Harbor Memorial at that time.

Reflecting on their amazing adventure, the Sveums feel very fortunate to have completed their trip before travel shutdowns took place. They feel very fortunate arriving home with everyone well, and attribute that to wearing masks. Connie remarked that she often picks up a sniffle when traveling, but not this time.

“We were happy to return home, happy we live here, there truly is no place like home.”