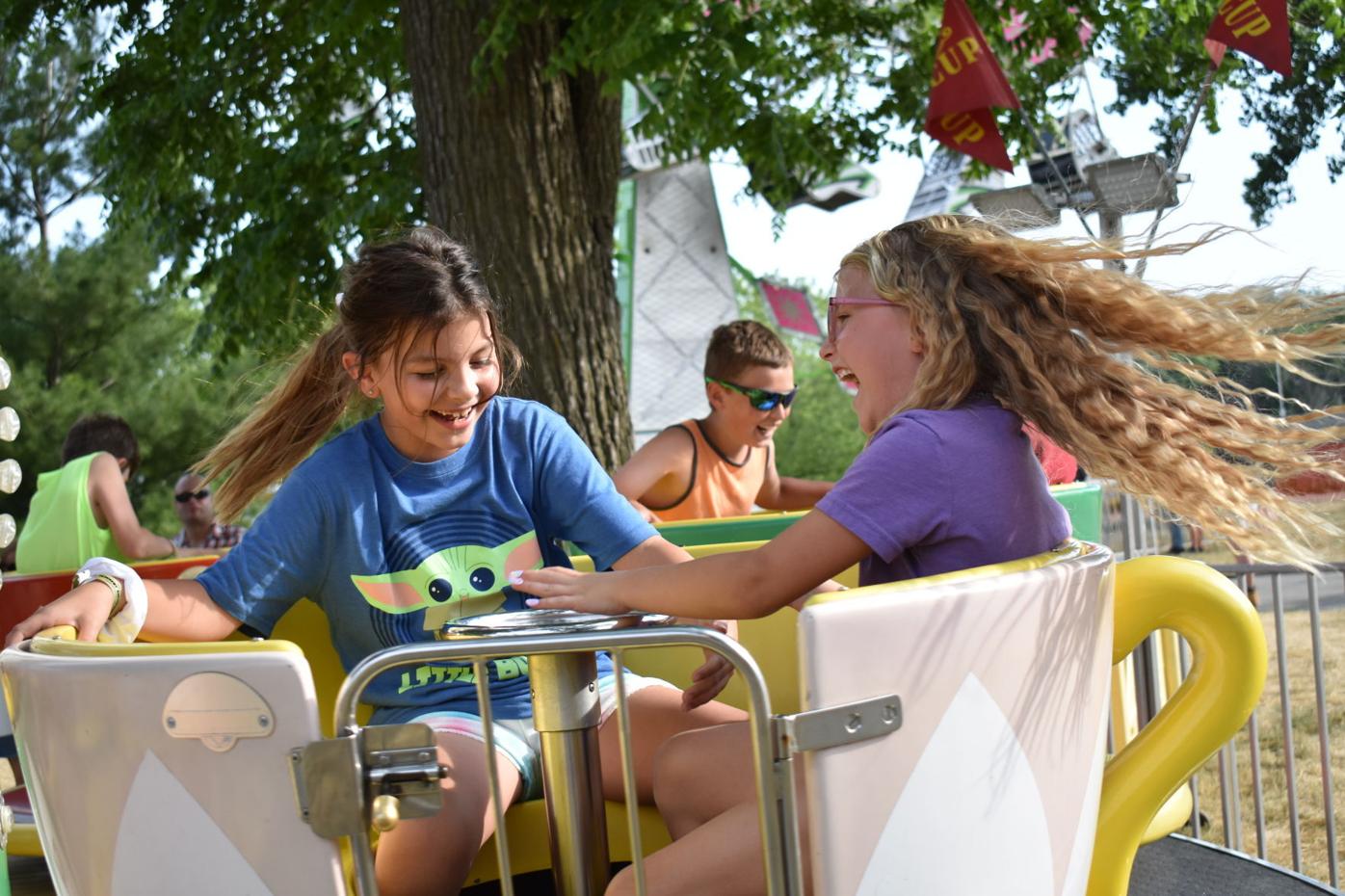 (From left): Classmates and friends Piper Calvette and Riley Hedges enjoy a ride on the tea cups during opening night of Old Settlers Day on Thursday. 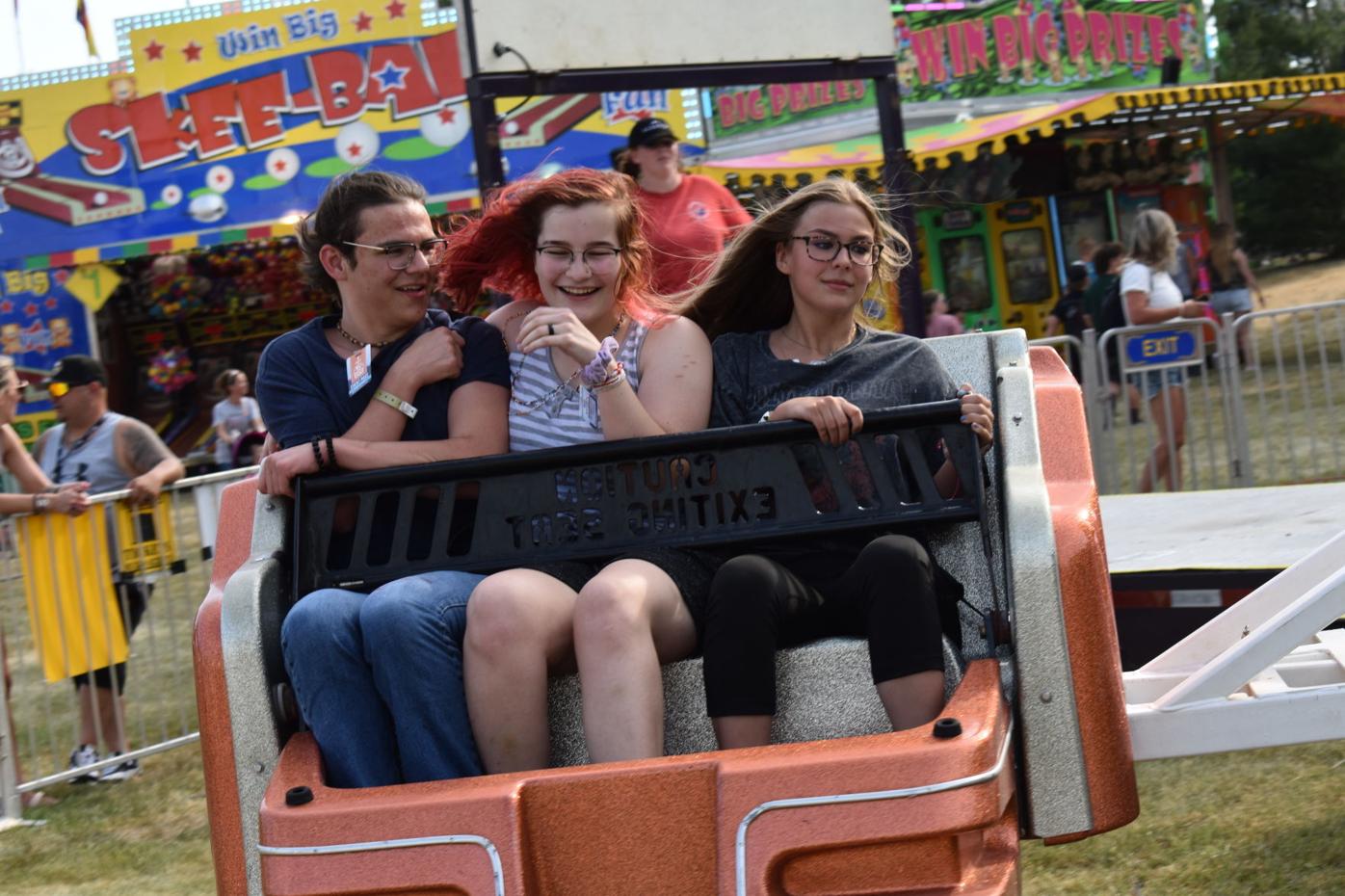 (From left): Noah Piliponis, Haley Dalton and Abby Piliponas enjoy rides at Old Settlers Day on Thursday evening. Many thrill seekers took advantage of a wristband special for the carnival.

(From left): Classmates and friends Piper Calvette and Riley Hedges enjoy a ride on the tea cups during opening night of Old Settlers Day on Thursday.

(From left): Noah Piliponis, Haley Dalton and Abby Piliponas enjoy rides at Old Settlers Day on Thursday evening. Many thrill seekers took advantage of a wristband special for the carnival.

ROCKTON—Old Settlers Days (OSD) opened Thursday much to the delight of carnival goers and music lovers.

Festival gates at Settlers Park opened at 4 p.m. with the carnival kicking off at 5 p.m. A steady stream of people were pouring through the gates.

“I just like the atmosphere of a big party, music, good food and listening to kids scream at the carnival,” said OSD Food Chairman and Media Spokesperson Carol Wright.

Old Settlers Days will be providing music, food and family fun through Sunday with a carnival, live music, mechanical bull rides and more. On Saturday there will be a parade at noon on Main Street. Skinners Amusement will provide the carnival attractions with wristband specials available. For the weekend, the event can attract between 25,000 and 30,000 people including carnival and shows.

Wright said Thursday appeared to be normal attendance for opening day, and the Chemtool fire didn’t appear to have slowed down attendance.

Wright said the Winnebago County Health Department gave clearance for the festival to occur. The fire, she said, was a terrible tragedy and those with OSD were prepared not to have OSD if had to be shut down. However, Wright said the festival got clearance, is almost two miles from the scene of the fire and the air quality has been tested constantly and debris was cleaned off the site.

The musicians were set to play live music later in the evening and were eager to perform after the festival was shut down due to the pandemic last year. Wright said all the musicians were acts booked for 2020.

Wright said it was great to see so many people having a good time.

“We are thankful for participants and appreciate their purchases to support our cause,” Wright said.

The Rockton Lions Club puts on the event and it’s the club’s biggest fundraiser of the year.

The Rockton Lions Clubs gives the money raised to charities supporting its focus on sight, hearing and diabetes as well as for other local needs. Wright said funds also help school and community projects and can include gift cards for those with hearing and sight needs.

“When you are having a good time, you are supporting a good cause,” Wright said.

The event is made possible thanks to the help of more than 60 volunteers.

“The atmosphere is really lively. It’s a quiet town except when this comes around,” Noah Piliponas said.

Grandmother Barb Calvette of Rockton brought her granddaughter Piper Calvette, 7, to meet up with her classmate Riley Hedges, 7, and Riley’s family on opening night.

“I like how we go high and also low,” said Piper of the many rides.

Her grandmother Barb Calvette said she felt comfortable coming out, noting she thought the EPA and other agencies had done a good job testing air and water quality and taking precautions.

“I think they are doing a good job,” she said.

“It’s good for kids, helps the community and everyone tries to support it,” she said.