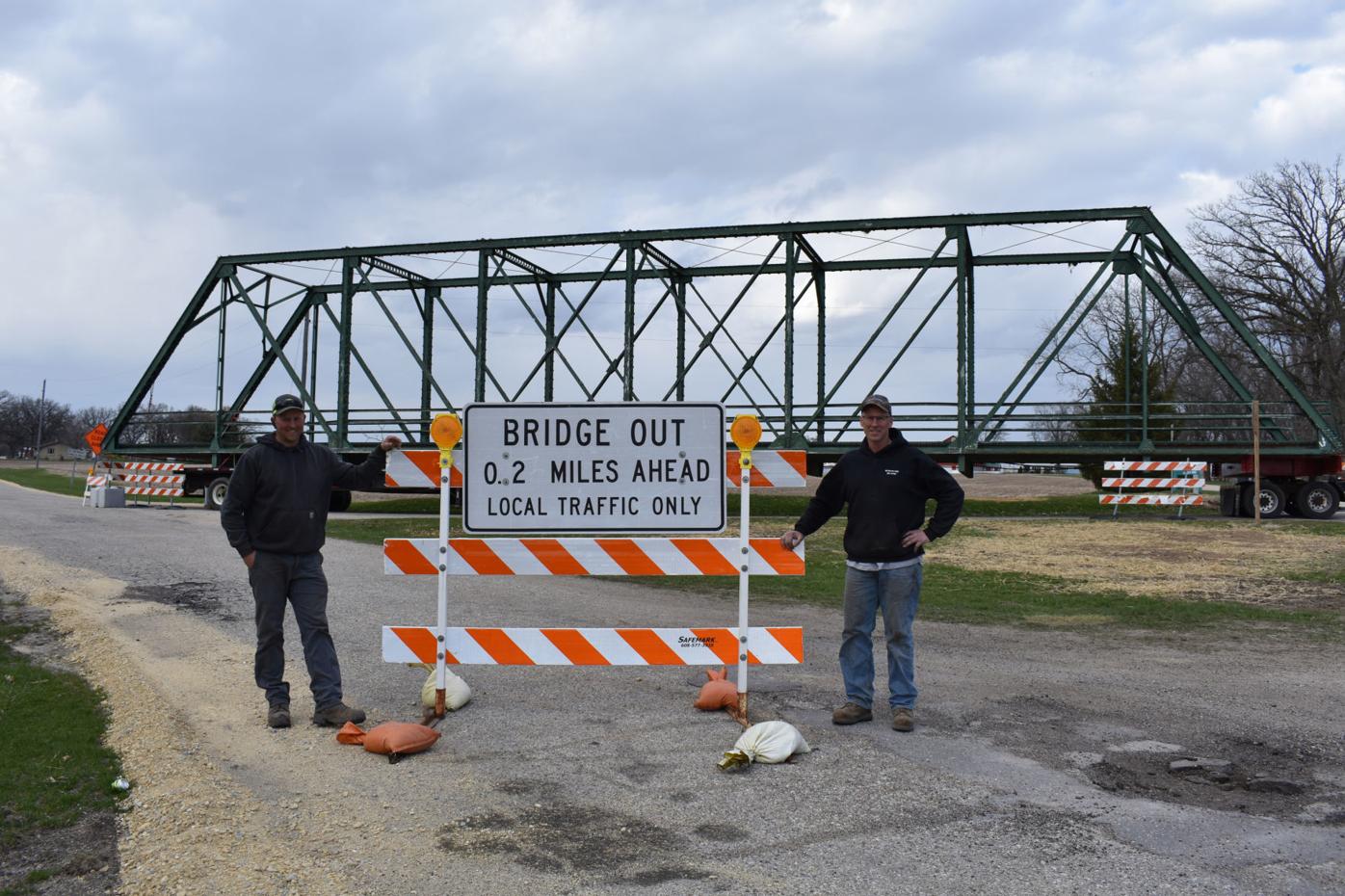 Paul Luety, left, and his father, Ken, stand by the Smith Road Bridge before it was moved to the Luety farm. 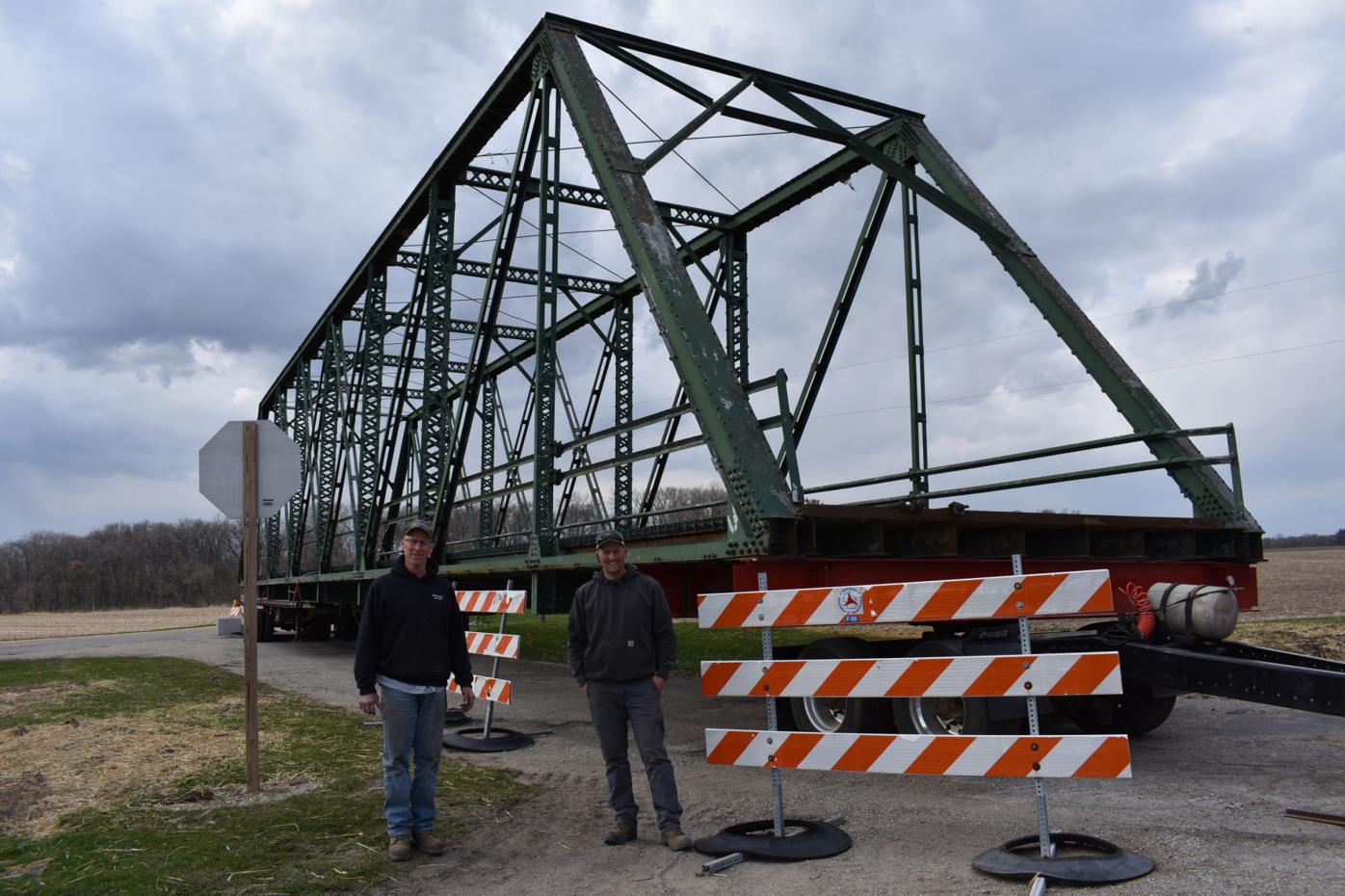 Ken Luety, left, and his son Paul stand by the Smith Road Bridge after it was placed on trailers for transport to the Luety farm.

Paul Luety, left, and his father, Ken, stand by the Smith Road Bridge before it was moved to the Luety farm.

Ken Luety, left, and his son Paul stand by the Smith Road Bridge after it was placed on trailers for transport to the Luety farm.

SHOPIERE- The 99,000-pound Smith Road Bridge may be as old as the Titanic, but it has enjoyed a much better fate and might be sturdier.

The steel structure has survived being lifted by a crane and being pulled down the road by a Case four-wheel drive tractor.

On Wednesday, weather permitting, the Luety family plans to move the bridge to its final destination on the family farm after Rock Energy Cooperative temporarily moves a power line to allow its passage.

The aging Smith Road Bridge over Turtle Creek was slated for removal by the Wisconsin Department of Transportation (WisDOT) to make room for a new bridge, and the state and Rock County agreed to provide up to $60,000 to relocate the bridge. Those interested were invited to submit proposals outlining their plans for the bridge, which then were assessed by the WisDOT and the Wisconsin State Historic Preservation Office.

Ken and Marcia Luety were selected to be the lucky recipients.

“Our number one goal was to save it and preserve the history of the bridge, rather than it getting dismantled,” said Ken and Marcia Luety’s son, Paul.

Ken Luety said he had his sights on the bridge for many years. He recalled special nights driving across it while in his 20s to see his future wife, Marcia. Ken Luety had plans to put the bridge near the pond and park-like setting on his property—a fitting home as it was only one-mile away from its original home.

He said the bridge would be on the snowmobile trail through his property and would be available for people to take graduation or wedding photos on as long as they contact him first.

Although Ken and Paul Luety were happy to help give the bridge a new home, they were nervous about safely moving such a gigantic piece of history.

Paul Luety enlisted friends and neighbors and spent many hours brainstorming the best ways of transport.

“It brought friends and neighbors together as everyone wanted to see it safely moved,” Paul Luety said.

Next, more than 20 truck loads of stone had to be put down to provide a sturdy base for the 500-ton crane offered by Mitch McCutchin of McCutchin Crane and Rigging out of Janesville. Because the crane was too heavy to move in one piece, it arrived in nine truck loads.

Josh Dutton of Dutton Welding & Millwright Services of Darien was enlisted to build a hitch which would be used to pull the bridge via the tractor. The back of the bridge was to be placed on two semi trailers. Not only was the 500-ton crane scheduled for arrival, but a smaller crane was brought in to assemble the larger crane.

After it was successfully placed, Luety and crew decided to move it one-half mile down the road on Saturday, where it’s currently resting at Ken Luety’s mother’s property located at the corner of Smith Road and County J.

If weather cooperates the bridge will be moved one-half mile more to Luety’s farm on Wednesday.

“We want to make sure it’s dry enough to make it across the field,” Paul Luety said. “The weather plays a large role in the process.”

Rock Energy has planned to temporarily take down the power line to allow the structure passage onto the farm.

After the bridge successfully weathered its journey suspended from a crane and toted one half-mile down the road, Paul Luety said he’s relieved and pleasantly surprised.

“Perhaps it’s a lot stronger than we gave it credit for,” he said.