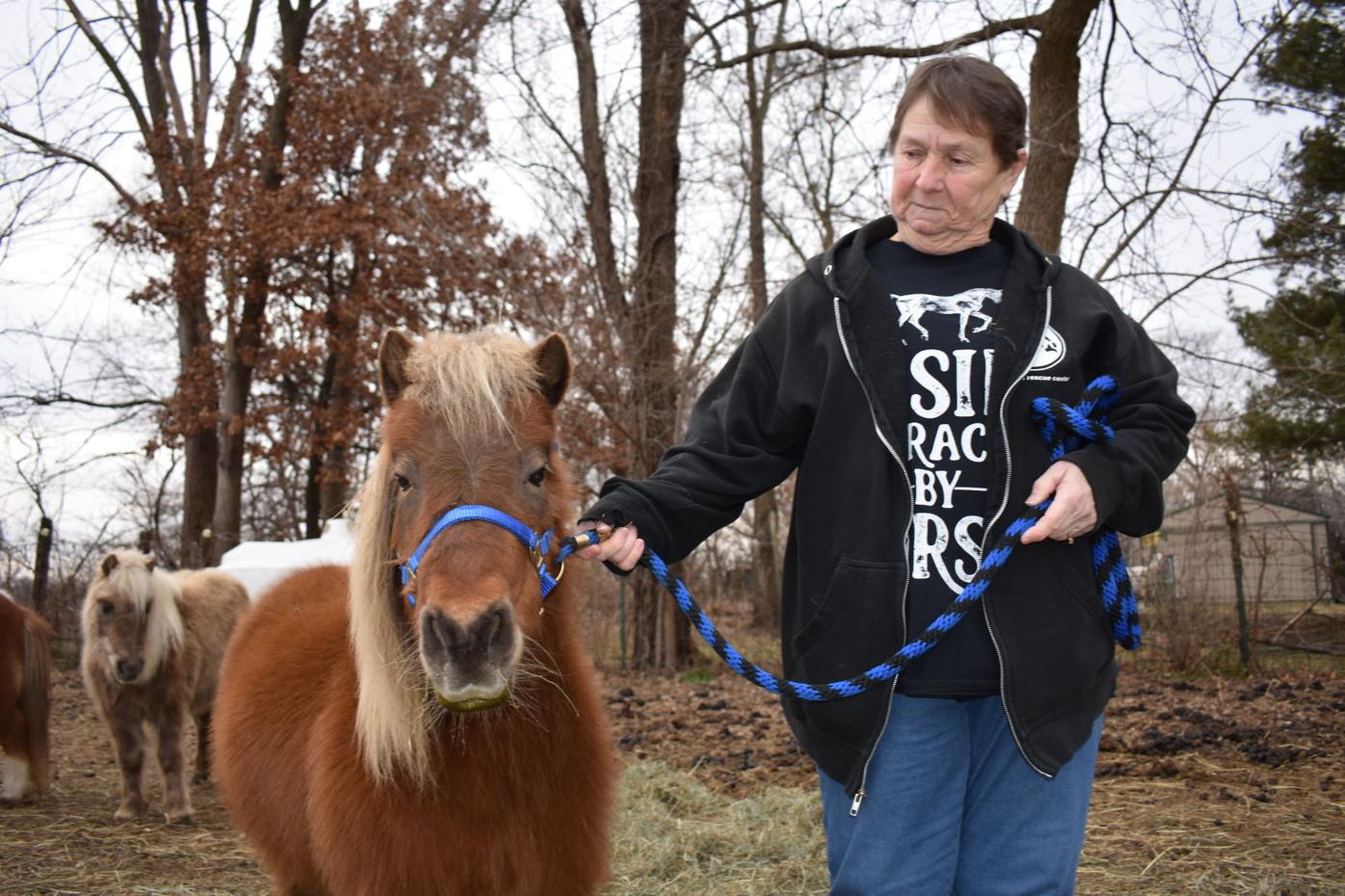 Trudy Burke walks one of her miniature horses named Tina. She and her husband Tim have been raising miniatures for two decades and love to show them off at parades, in the show ring or to visitors to their farm. 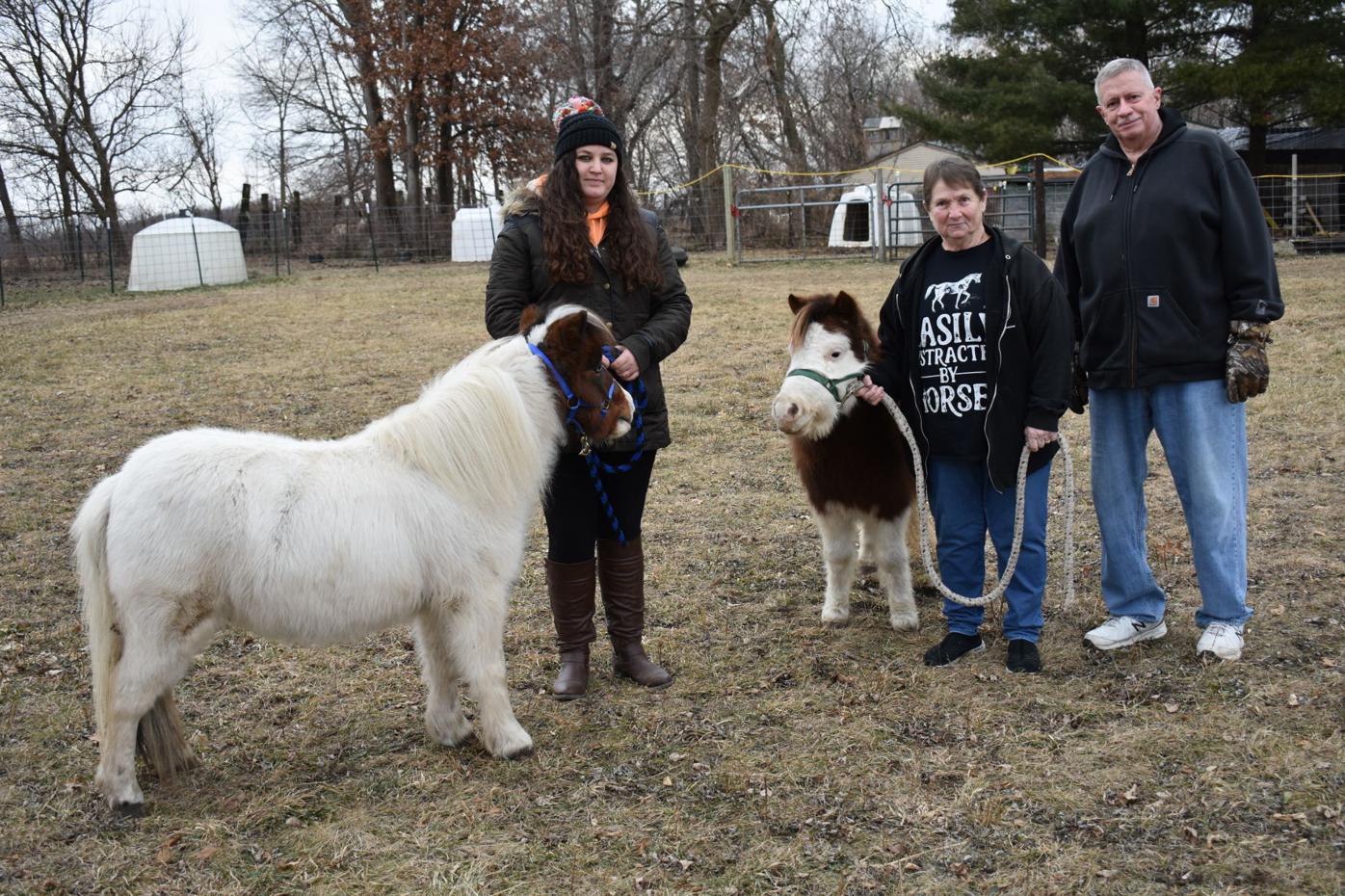 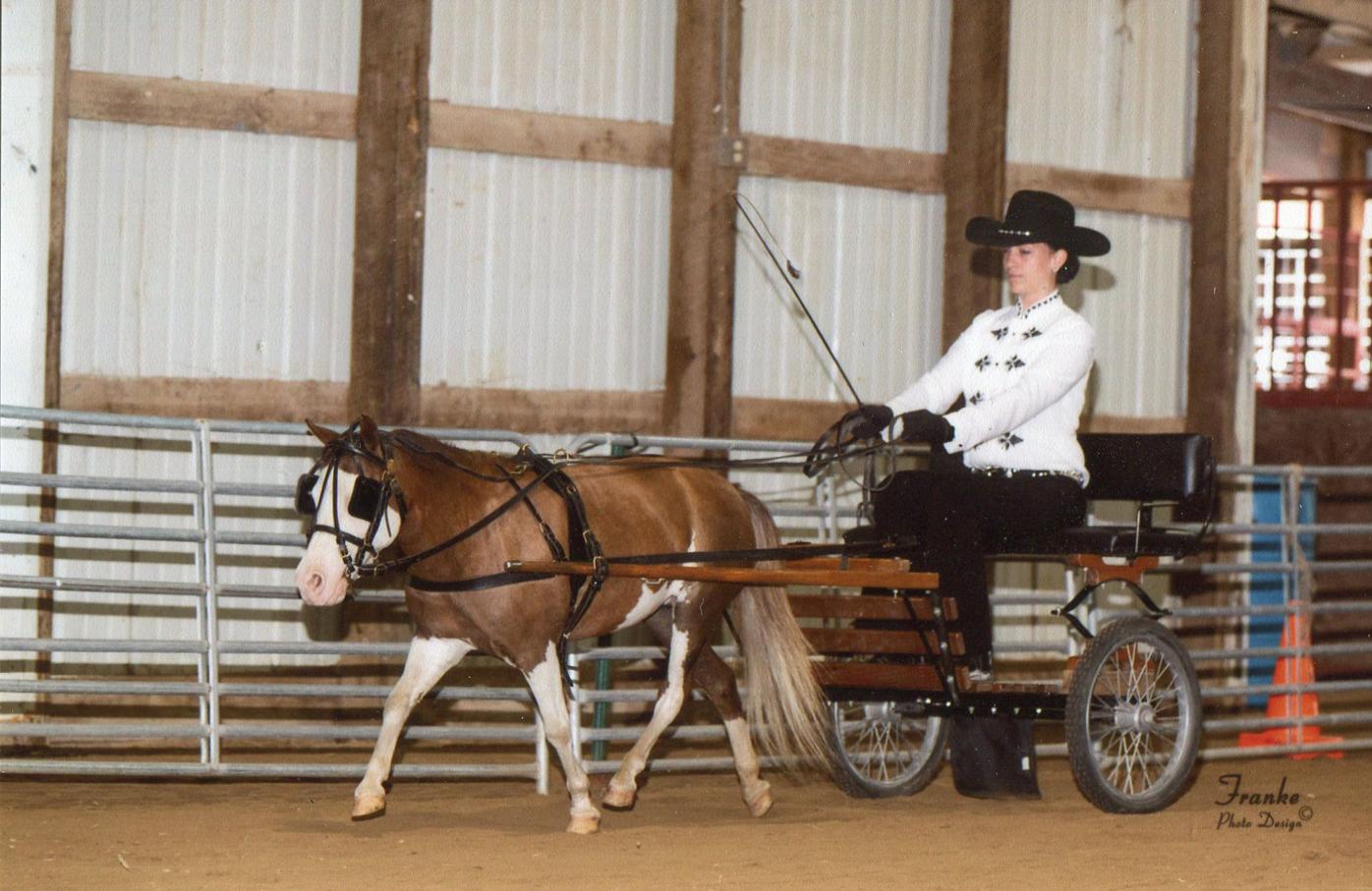 Alyssa Ebert is shown pulling a cart with Angel at a show in Boone County in 2019. Tim and Trudy Burke’s miniature horses often debut in the show ring. 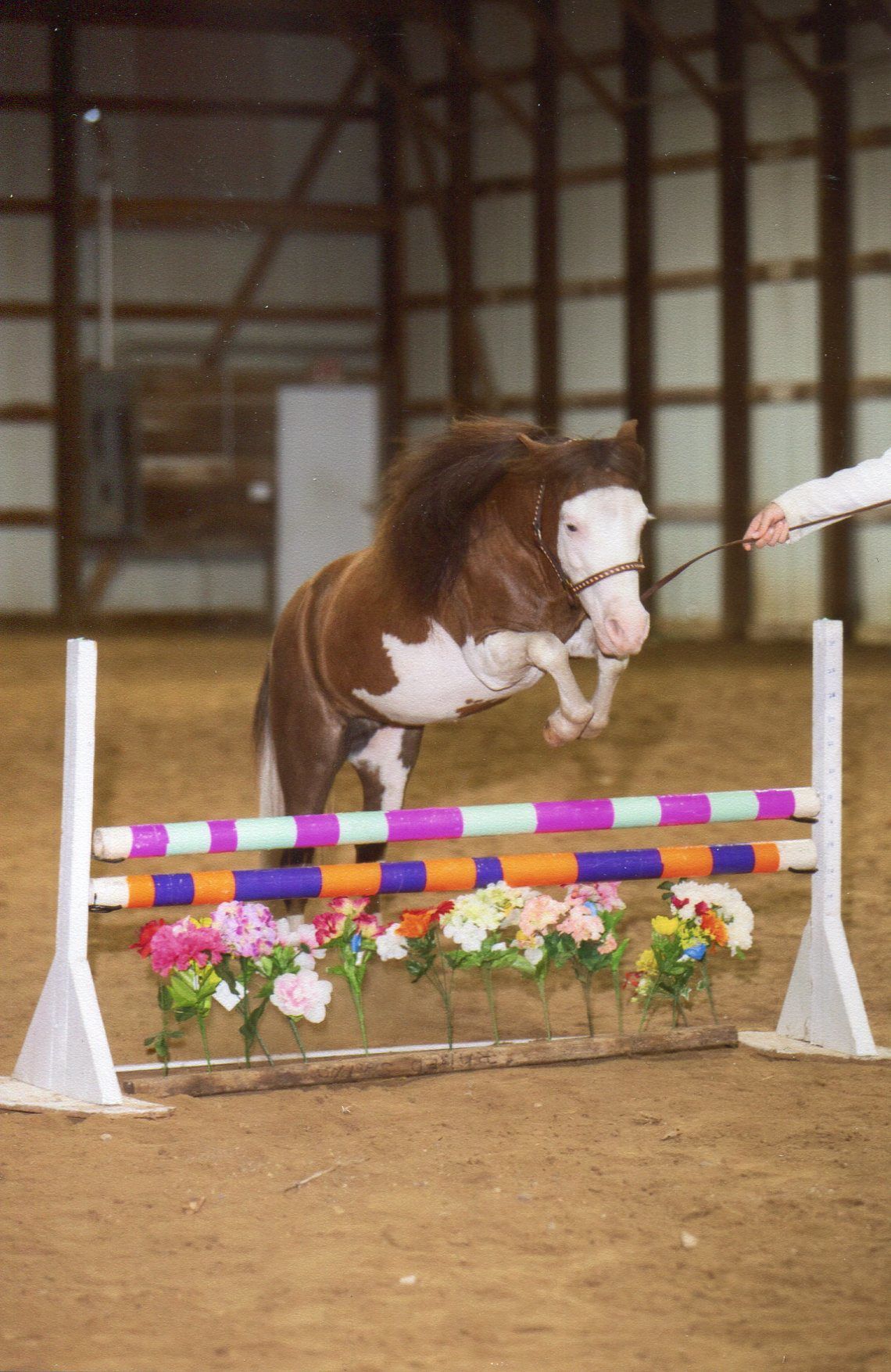 The miniature horse named Angel is jumping in 2019 at a show in Boone County. She was raised by Tim and Trudy Burke.

Trudy Burke walks one of her miniature horses named Tina. She and her husband Tim have been raising miniatures for two decades and love to show them off at parades, in the show ring or to visitors to their farm.

Alyssa Ebert is shown pulling a cart with Angel at a show in Boone County in 2019. Tim and Trudy Burke’s miniature horses often debut in the show ring.

The miniature horse named Angel is jumping in 2019 at a show in Boone County. She was raised by Tim and Trudy Burke.

ROCKTON — Trudy and Tim Burke say miniature horses are like potato chips. It’s hard to have just one.

It’s part of the reason their love of the wee equine blossomed into Burke’s Dixieland Miniatures, a collection of miniature horses at 6866 Forest Preserve Road including seven pregnant mares. Their love of the little horses has spread as they share their many talents with others by featuring them in parades and shows. They also host farm visits and let 4-H kids come learn how to work with the horses.

Trudy said she always wanted a pony, threatening to leave home at age 3 on her tricycle without one. She never abandoned her dream as she grew up, and later worked as a vet technician and ran a pet store.

It was in the early 2000s she finally took the plunge. She had spotted a miniature horse at a farm while stopping at a garage sale and immediately set out to find one online.

“I saw the minis and that was it. I was in major trouble,” Trudy said.

She got Jazz in 1997, followed by Tina and Misty. The original three still happily reside on the farm today.

Trudy quickly learned how much work the critters could be. Although they are hardy, handle cold weather well and require less feed and space than a larger horse, they require hoof trimmings, clean pens, veterinary care and lots of love. They also need re-direction and training. Just because they are cute doesn’t mean they are quite as docile as a dog.

“They are so cute people want to treat them like pets or dogs. They are going to act like real horses, and they have to be corrected. I have to act like ‘head mare’ and rule the roost,” Trudy said.

They also require lots of stimulation and challenges, such as learning to pull carts.

“They can get in trouble if they are bored,” Trudy said.

Over the years the Burkes enjoyed raising them and occasionally breeding them.

In 2012, they wanted some extra help and brought on Miniature Horse Manager Faye McManus to assist with feeding, cleaning and general maintenance. McManus also wanted to get the horses in shows, a new adventure for the Burkes.

McManus said her mother had bought a miniature from Trudy and she was looking for a job. She had grown up in Poplar Grove showing a variety of horses.

Trudy said she was thrilled to see her miniatures make it to the show ring thanks to McManus.

“I just like to see them out there and see what they can do. They pick up everything so fast,” Trudy said.

“It’s nice to put the work into them and see the fruits of your labor. When we get them trained and driving, it’s cool to see them go into the arena,” McManus said.

McManus said over the years a variety of 4-H kids have cycled through the farm from families which can’t afford a horse of their own.

“They come and help us and get to do stuff,” McManus said.

Soon the Burkes began lining their walls with ribbons for their growing number of talented miniatures. The Burkes have also had good luck breeding and sharing them, with one family getting a miniature to help a child with multiple sclerosis practice walking. Another one of the minis which they sold has gone to visit a nursing home.

In recent years the Burkes average about seven to eight shows a year where they are judged on halter, driving or cart pulling, jumping and trail. The Boone County Fair is one of their biggest events.

They also show them off at the Rockton Christmas Walk, Belvidere Christmas Parade, Kirkland Parade and more when they bedazzle them in bells and bows and wrap them in battery-powered lights.

“We hold up parades and let the kids pet them,” Trudy said.

Although they were unable to make it to parades this year due to COVID-19, at the Rockton Christmas Walk they were able to set up in an area at Old Settlers Park where people could come and pet the horses.

When out, McManus often passes out cards in hopes kids will come visit the farm.

“The more people that see them, the better it is for the horses. Kids can come and learn to brush them,” she said.

Visitors to the farm also can visit the Burke’s pigs, two large horses, sheep and goats.

“It’s not limited to the horses,” Trudy said.

Trudy said raising miniatures never gets boring. Most recently, she and her husband and McManus have been tending seven pregnant mares who are expected to give birth in March or April. Four of the seven foals are already accounted for as people are eager to buy them. They are especially dear to watch although they are a bit frisky at first.

“They are cute little wild things,” she said.

Trudy continues to derive joy from their unique personalities, their leaping across the grass and their many skills in the show ring. Despite the work, she said they are worth it.

“I could sit out there all day and watch them. They are very relaxing,” she said.