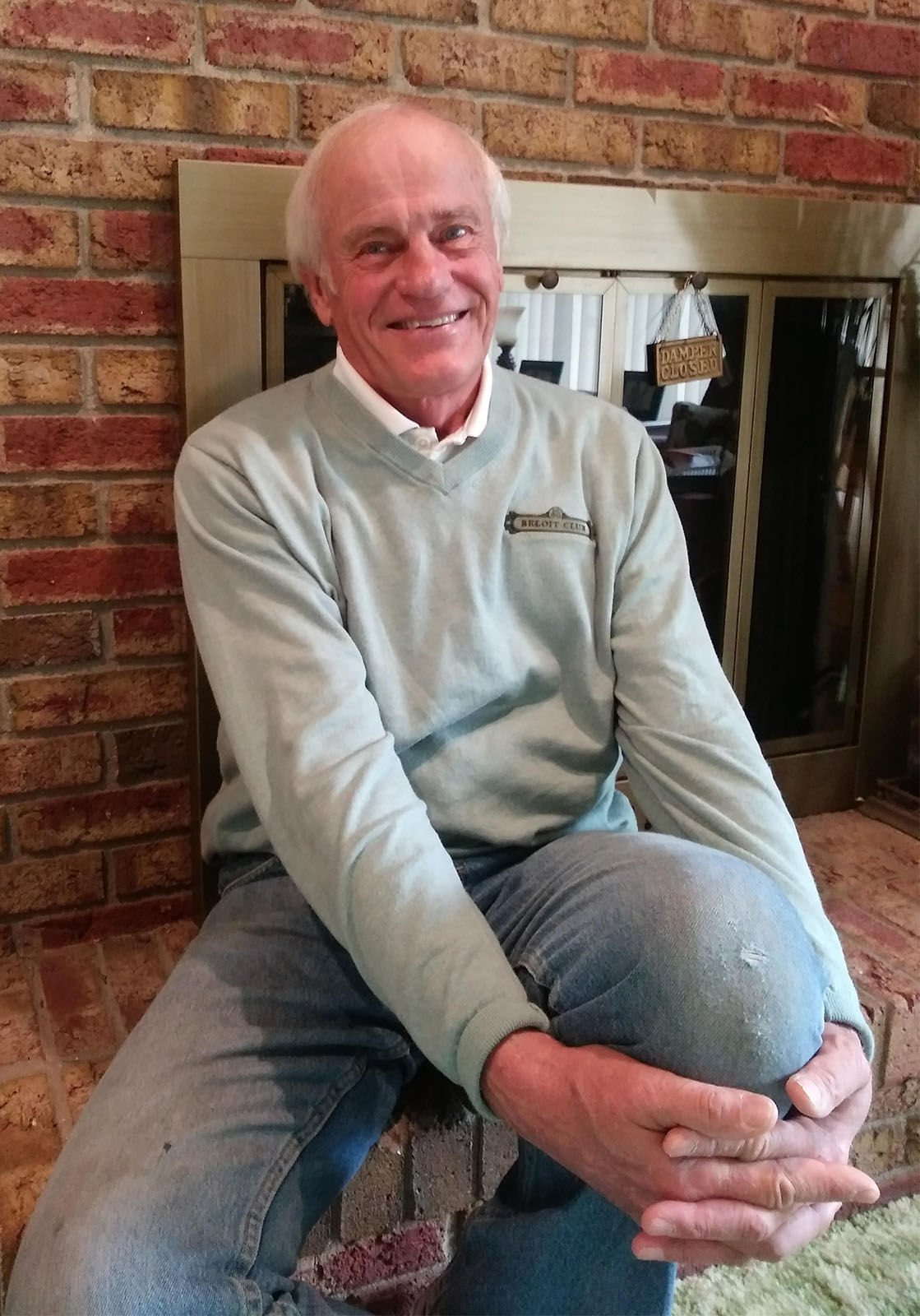 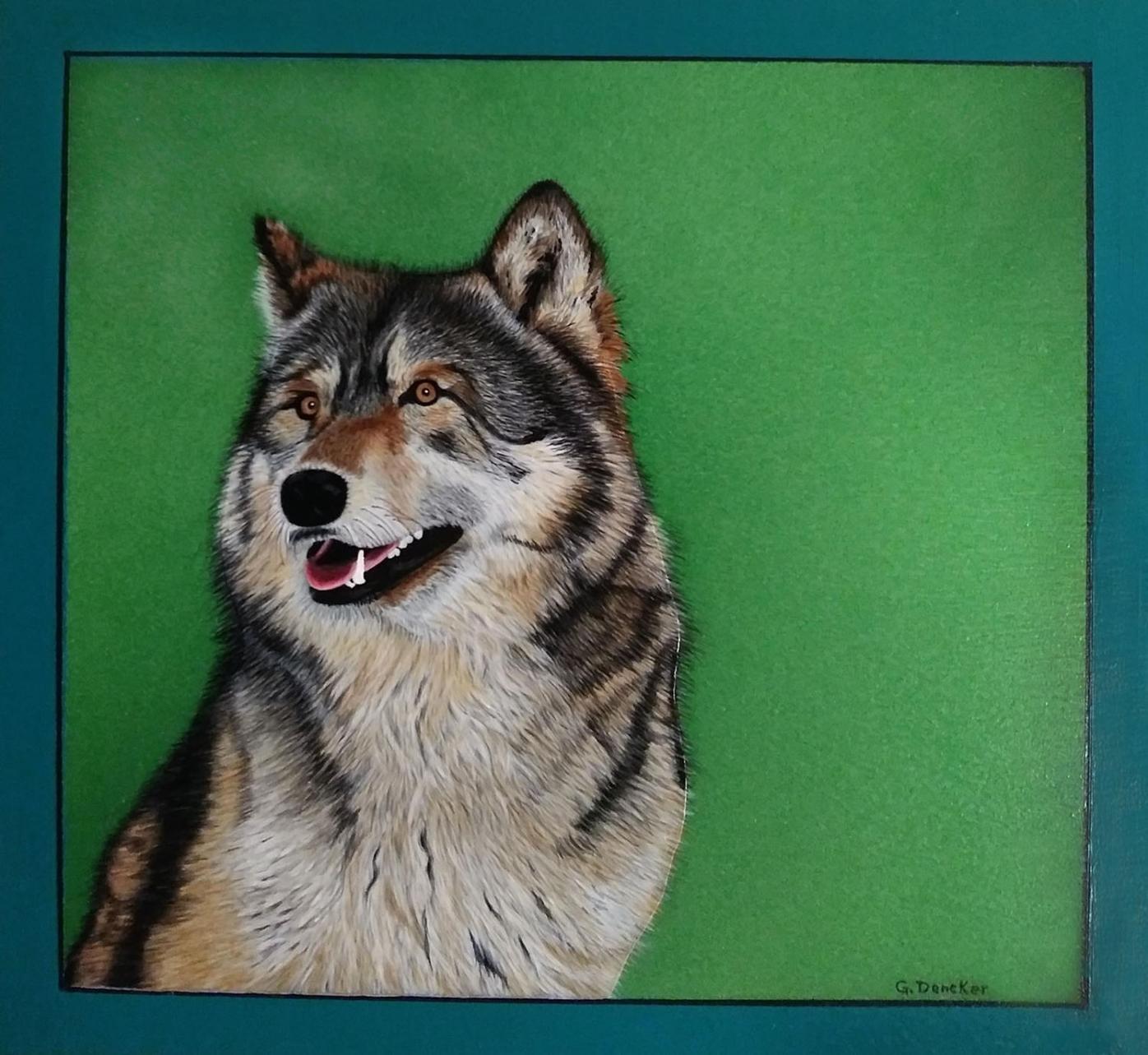 “Wolf” is an acrylic painting by Gary Dencker. This painting recently received an award by the Wisconsin Regional Arts Program, qualifying the painting to move to competition on the state level. 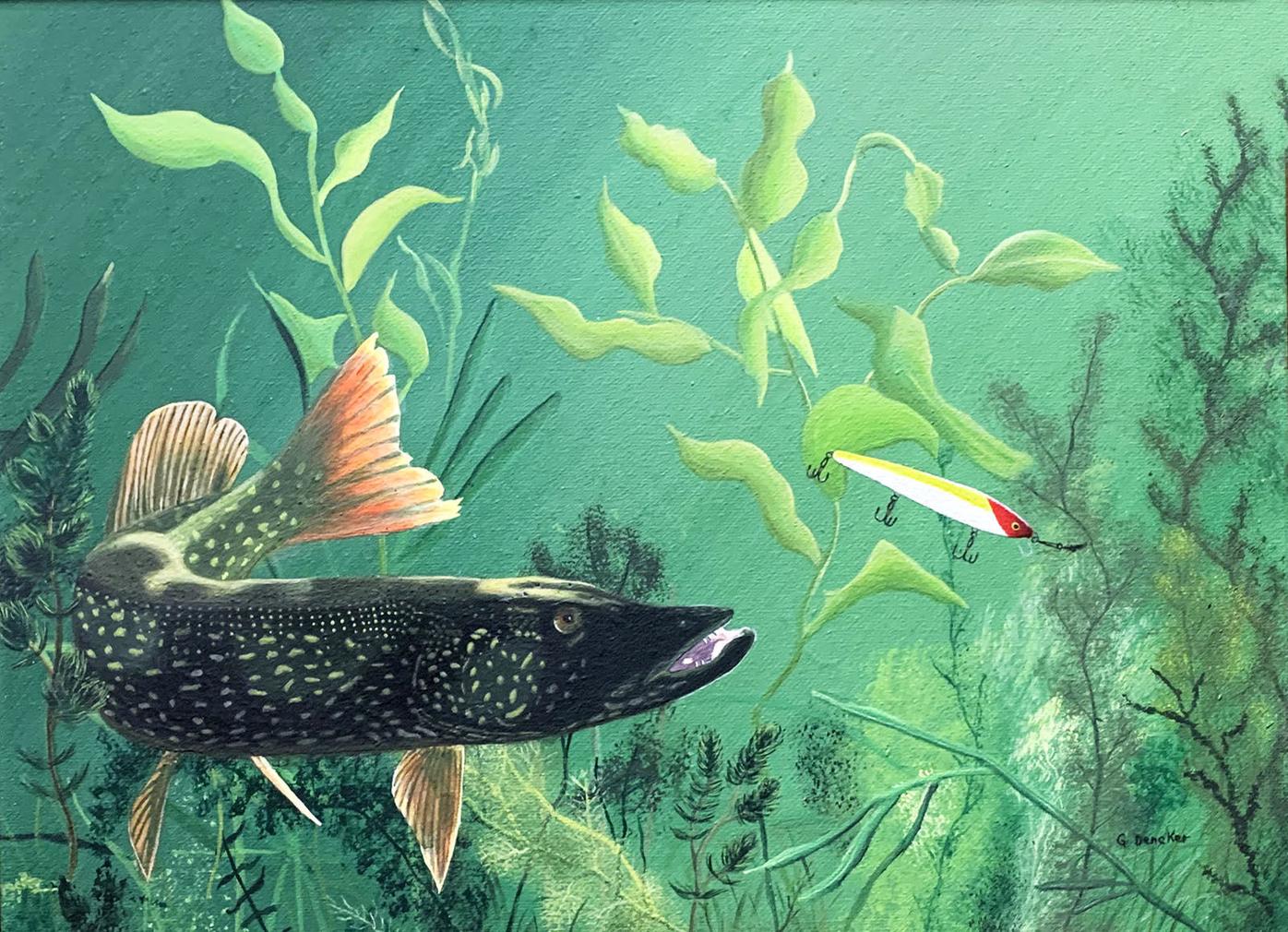 “Ambush” is an acrylic painting by Gary Dencker. 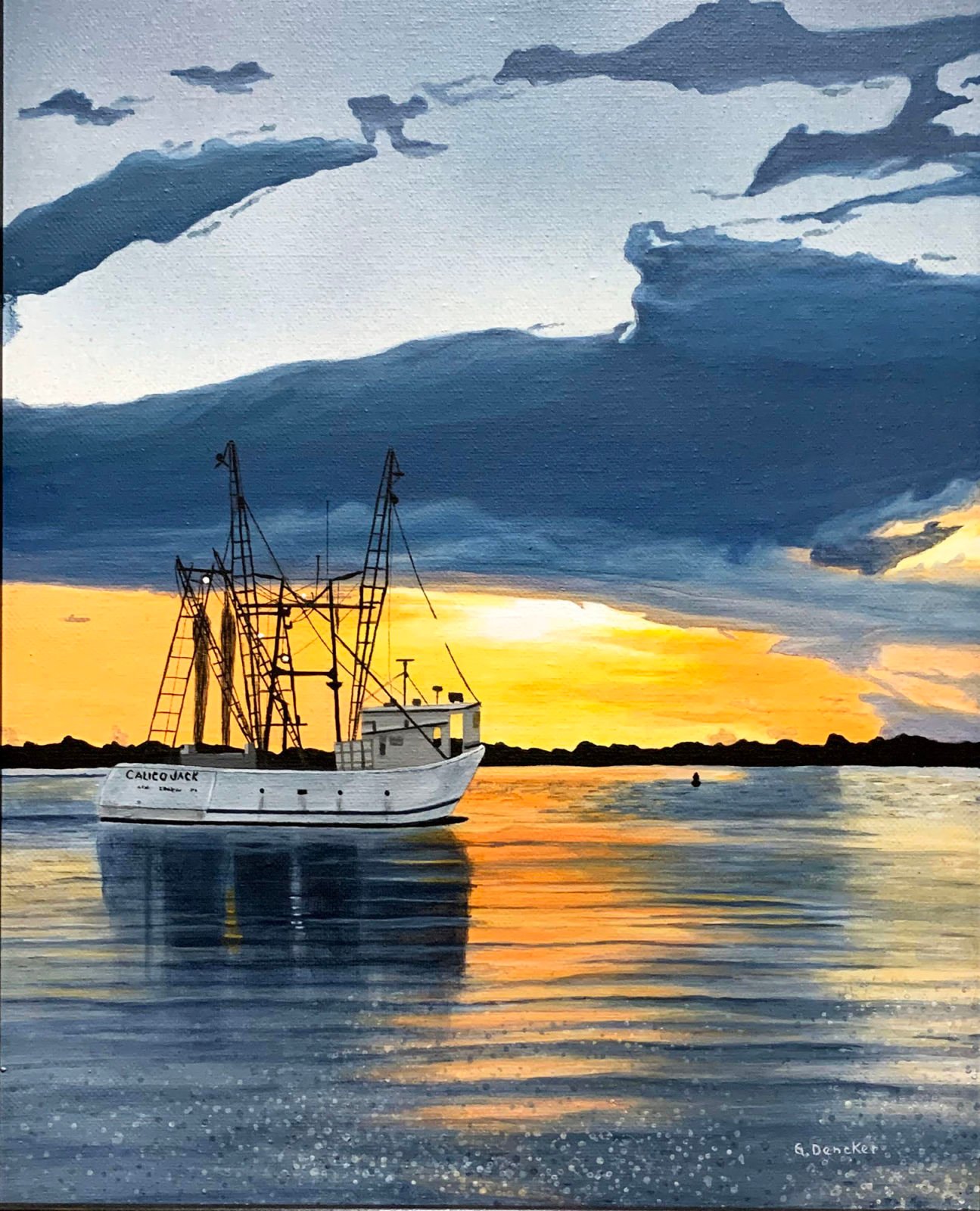 “Return of the Calico Jack” is an acrylic painting by Gary Dencker. 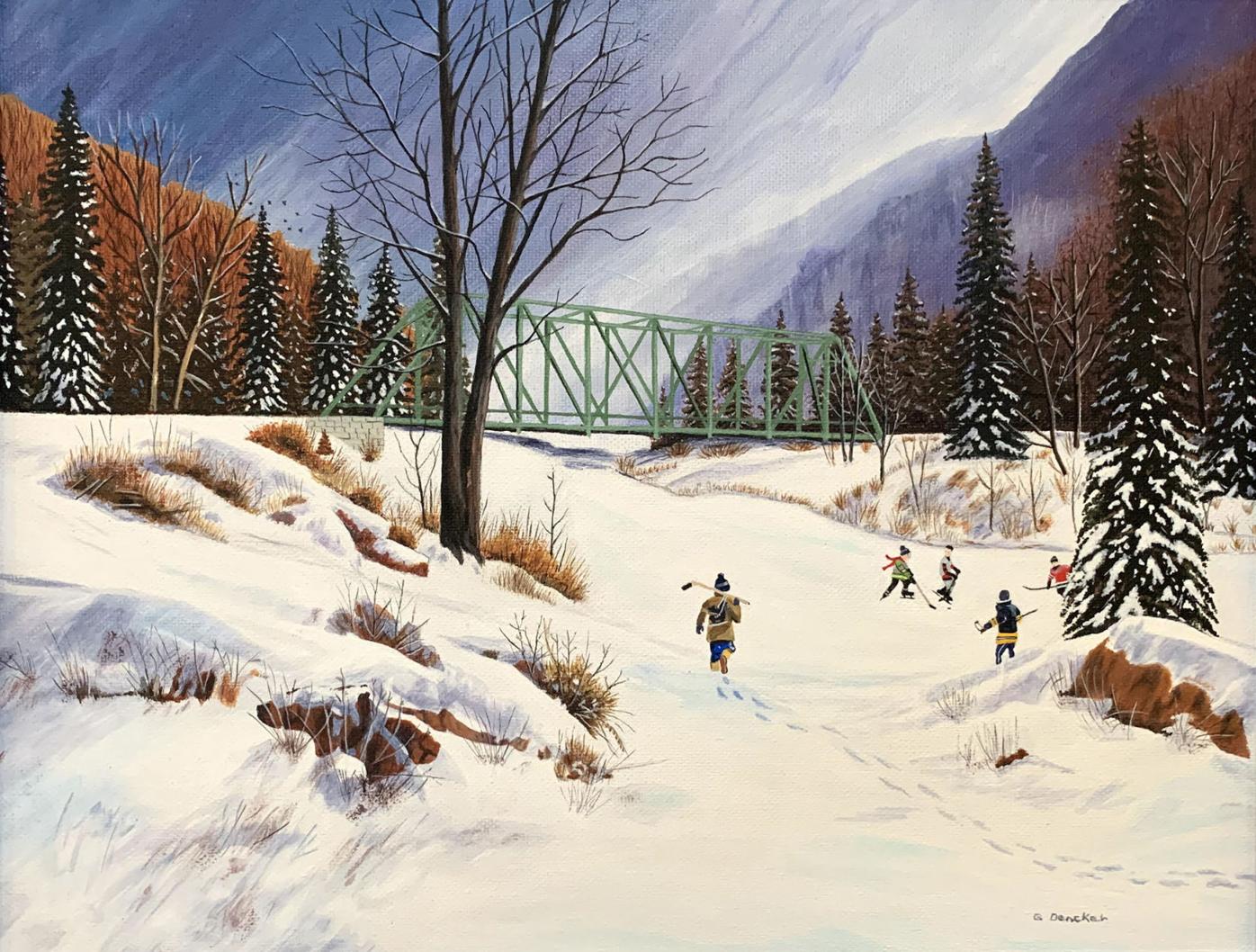 "Snowy Day, Children Playing Hockey by the Creek" is an acrylic painting by Gary Dencker is currently on display at the Beloit Public Library. This painting won a state award several years ago.

“Wolf” is an acrylic painting by Gary Dencker. This painting recently received an award by the Wisconsin Regional Arts Program, qualifying the painting to move to competition on the state level.

“Ambush” is an acrylic painting by Gary Dencker.

“Return of the Calico Jack” is an acrylic painting by Gary Dencker.

"Snowy Day, Children Playing Hockey by the Creek" is an acrylic painting by Gary Dencker is currently on display at the Beloit Public Library. This painting won a state award several years ago.

BELOIT — Gary Dencker did not know that painting would become one of his favorite things later in life.

Milwaukee was young Dencker’s hometown. Dencker loved sports, building model cars—and painting them with fancy paint jobs, a hint of what was ahead for him. He didn’t study art in college, though enjoyed the art appreciation class he was required to take.

Today, Dencker has quietly emerged as an award winning painter.

Dencker was encouraged to enter local art competitions by longtime friend Jerry Sveum. Sveum is the current director of programming and co-chairman of the programming committee as well as the treasurer of the Beloit Art Center at 520 E. Grand Ave. in downtown Beloit.

The painting “Kids Playing Hockey on the Creek,” won a state award.

Dencker learned of his most recent award bestowed by the Wisconsin Regional Arts Program in early December, 2020, “Wolf.” That painting will go on to state competition.

During Dencker’s freshman year of college his dad bought a car dealership in Beloit “Freshmen weren’t allowed to have cars,” said Dencker.

During break that first year Dencker hitchhiked to Beloit from Oshkosh, it was how college students traveled “back then.”

His folks had purchased a model home in a newly built subdivision in the Town of Beloit, Garden Village. Dencker had not been to the new family home. His ride dropped him off at the entrance of Garden Village. Dencker walked into the new subdivision with his backpack slung on his shoulder looking for clues as to which house was his parents’ new home. A car slowed down as Dencker walked up the street.

“Hey, are you the Dencker kid?” the man asked.

“Yes I am,” Dencker replied.

“Hop in, I’ll give you a lift to your folks new place.”

A few years after the Dencker family purchased the car dealership in Beloit an opportunity to buy a dealership in their old hometown of Milkaukee presented itself. The family took a vote and decided to pass. The family had grown to love Beloit so much so that it had become their home.

Dencker and two of his brothers worked at the Buick Pontiac dealership with his father. After their father retired, Dencker’s older brother Dennis was president and Dencker was vice president. Very tragically in 2006 the family lost their father to cancer. Three weeks later they also lost Dennis to cancer. Dencker was “in charge of running the agency.” Today the Finley Dencker Buick Pontiac GMC at 2700 Milwaukee Road is a well established business in town.

In his mid 50s, Dencker was inspired to take painting lessons after seeing paintings on the walls at Pulaski Kennels west of Beloit. Dencker was impressed by the paintings of the animals in the lobby. Dencker learned that the vet’s wife, Judy Pulaski was the painter. She offered painting classes. Dencker signed up and was the only male in the class. For two years he continued to take classes with Pulaski. She was a good painter and teacher. She taught acrylic painting emphasizing brush choice, technique, and working from photos. “Paint what you see,” was her teaching mantra. She was very hands on, Dencker learned a lot from her. Since his initial painting lessons almost 20 years ago, Dencker has continued to learn on his own.

Learning to paint began with landscapes. Eventually he learned to paint animals, Dencker came to realize he was a detail painter. Using the techniques taught to him by his teacher, Dencker slowly builds each painting by laying light washes of color followed by tiny exacting brushwork to build up hair or feathers or scales of his subjects. His love of detail is visible in many of his paintings which are displayed through the end of December in the small gallery space to the left of the entrance within the Beloit Public Library. Backyard birds—which he considers to be his specialty—are some of his favorite subjects. Friends sometimes give him photographs of subjects for painting.

Always on the lookout for what might make an interesting next painting, he takes lots of photographs to use as reference.