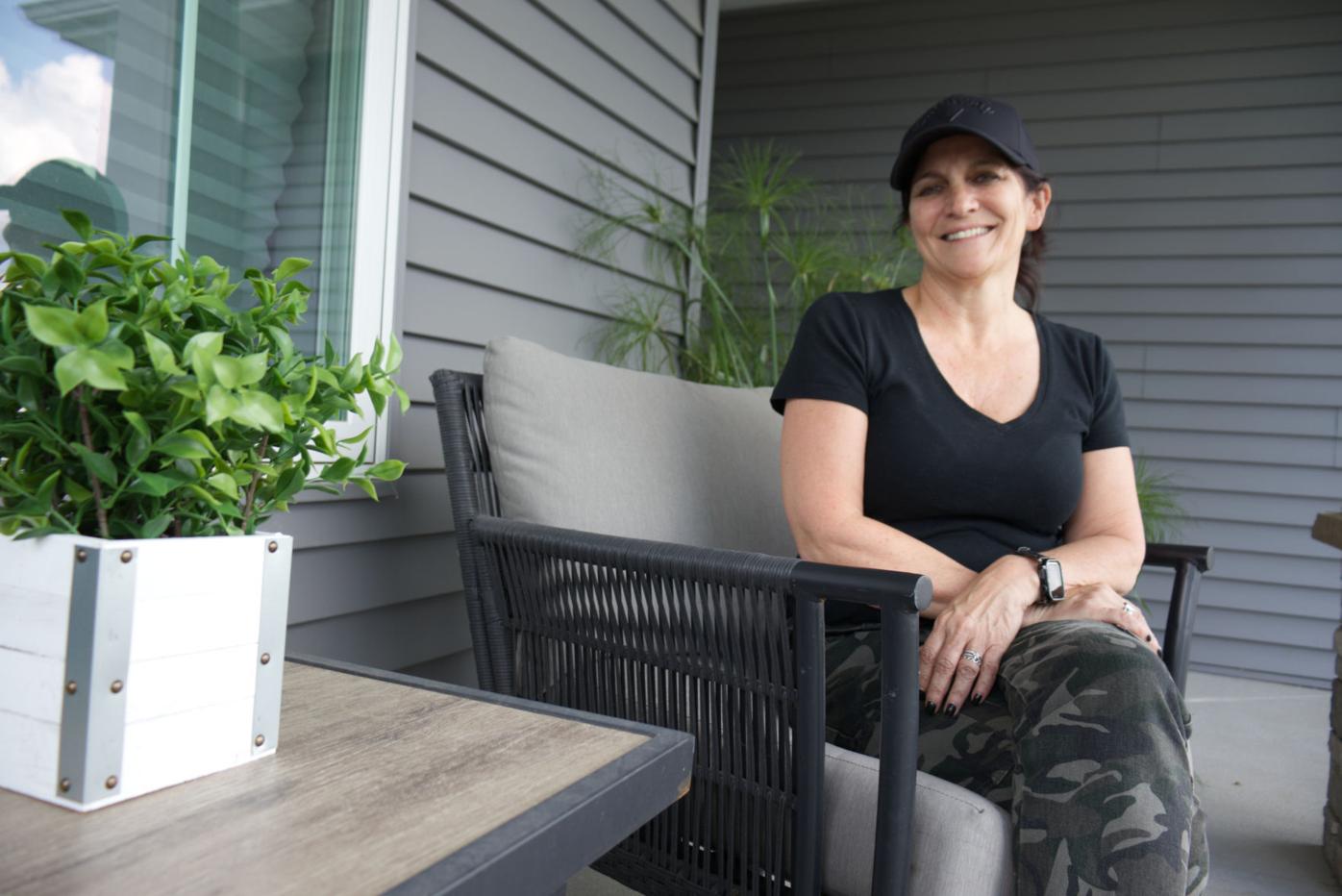 Karla Clark is pictured on the porch at her condo on South Blue Jay Road in the Town of Beloit. The Blackhawk Run subdivision where Karla recently moved in is rapidly developing with new houses and families. 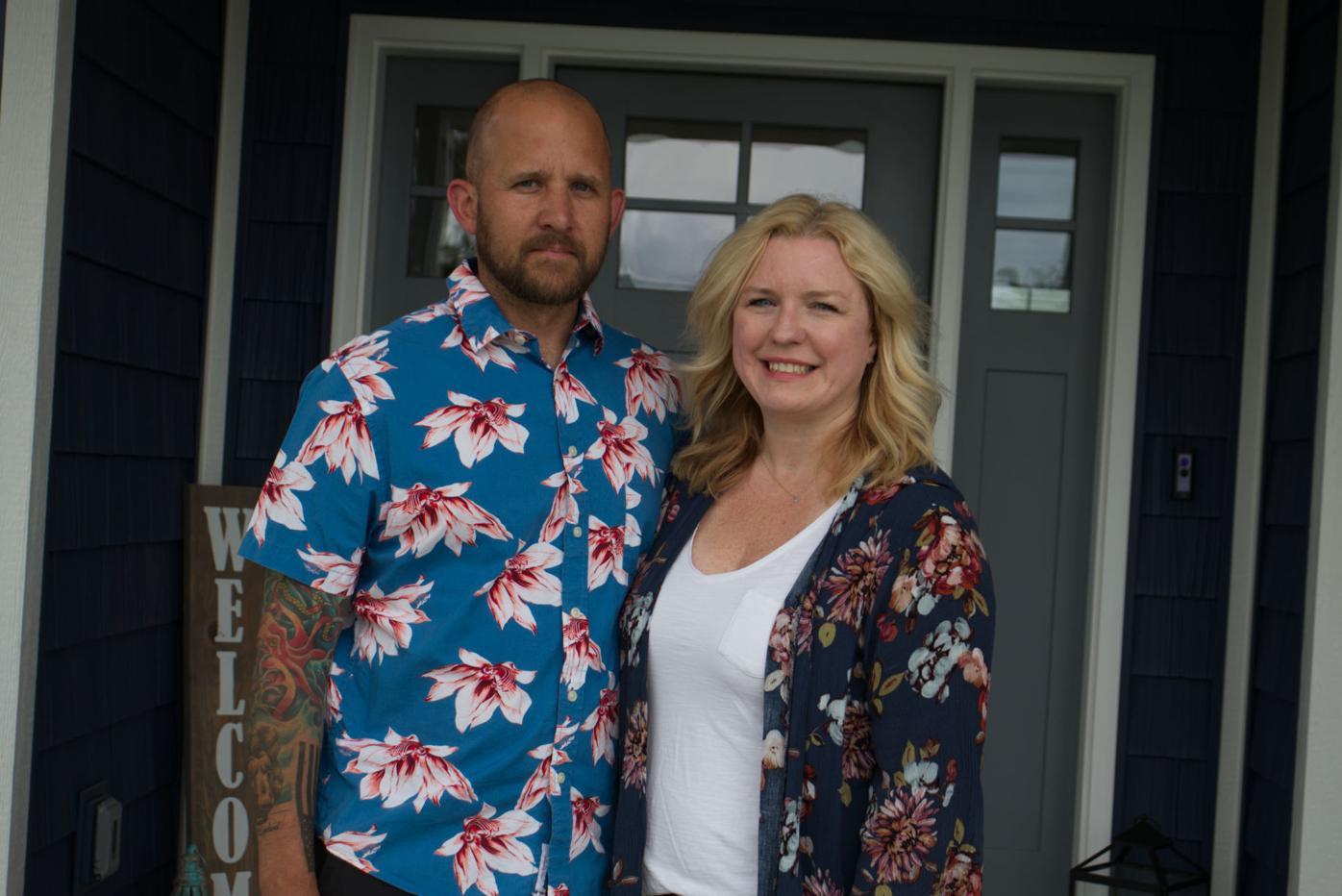 Jeff and Jenna Winiarski recently bought their second home in the Town of Beloit. The couple is excited to be in a brand new neighborhood as housing growth is rapidly expanding around them. 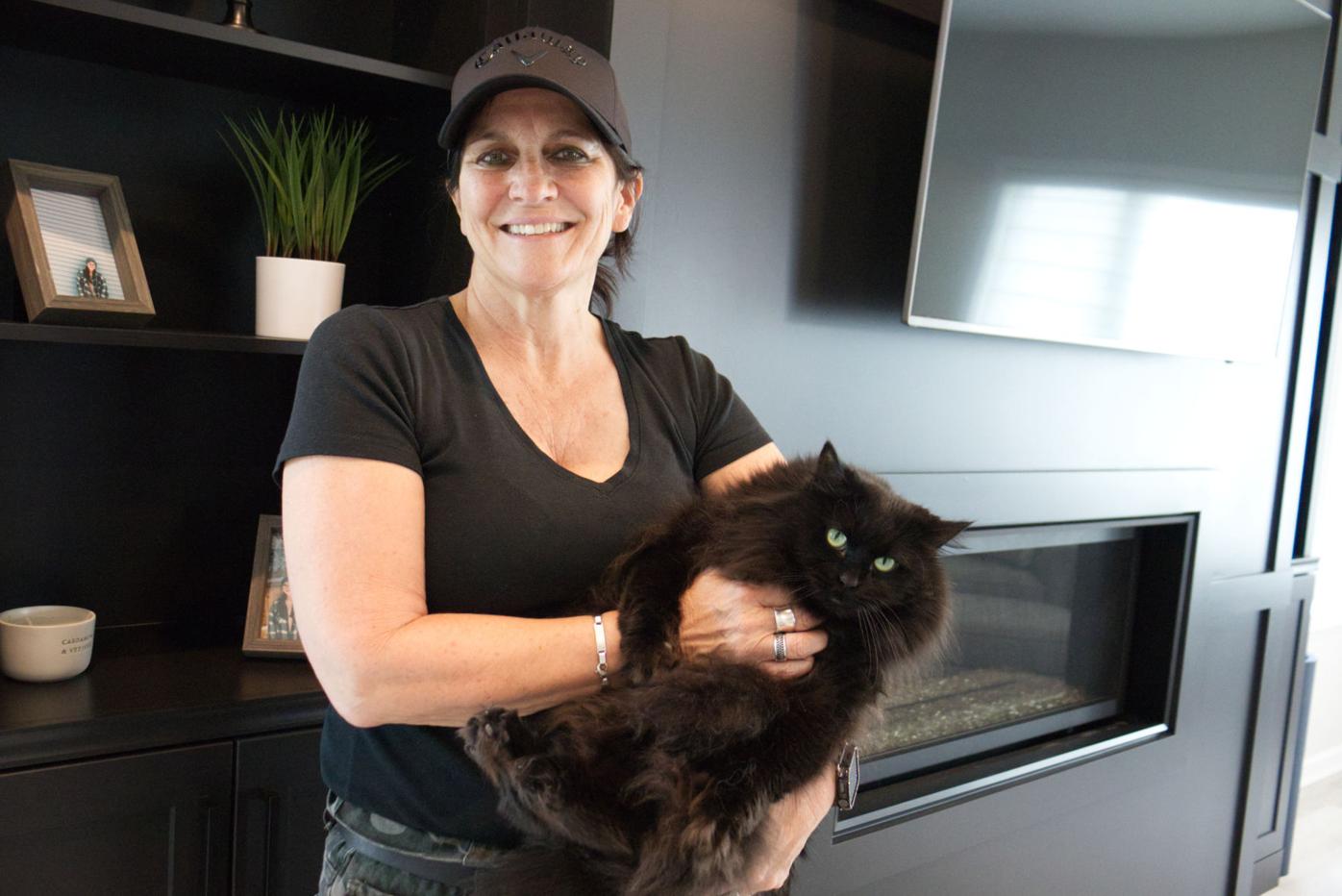 Karla Clark and her cat Izzy are shown inside her new Town of Beloit duplex home. The fourth-time homeowner was able to pick all sorts of features, including countertops, flooring, colors and a fireplace.

Karla Clark is pictured on the porch at her condo on South Blue Jay Road in the Town of Beloit. The Blackhawk Run subdivision where Karla recently moved in is rapidly developing with new houses and families.

Jeff and Jenna Winiarski recently bought their second home in the Town of Beloit. The couple is excited to be in a brand new neighborhood as housing growth is rapidly expanding around them.

Karla Clark and her cat Izzy are shown inside her new Town of Beloit duplex home. The fourth-time homeowner was able to pick all sorts of features, including countertops, flooring, colors and a fireplace.

TOWN OF BELOIT—Jeff Winiarski and his wife, Jenna, recently moved into their second home with their three sons, ages 8, 9 and 12.

The new house is somewhat larger than their last place, making it a nice change of setting.

What’s more, the Turner School District’s brand new Garden Prairie Intermediate School is only a stone’s throw from their front yard. For two of their boys, it will be a fast walk to school every day.

“We’re really excited for them to be able to do that,” Winiarski said.

As new homes have been going up seemingly overnight in recent years, homeowners, developers and town officials say they are excited for continued growth in the future.

Community Development Director Tim Kienbaum said he is confident that the township will see steady growth for years to come.

“It’s certainly been increasing. We’re seeing more permits and more houses than we ever have over the last several years,” Kienbaum said. “There doesn’t seem to be any signs that it’s going to slow down in the near future.”

One reason for the housing boom could be attributed to a recent reevaluation and higher average assessed values on homes in the township as a whole, Kienbaum said.

There is also a limited amount of property for homes available overall, meaning as new properties open up, prospective homeowners are eager to settle in.

Additionally, the township had purchased large areas of land in the past and began downsizing around 2008, selling off town property to developers, Kienbaum said.

Town Board Chair Diane Greenlee said housing development in the Town of Beloit really picked up in the last three to five years.

Greenlee said after the town board opened up empty lots in the Heron Bay, Blackhawk Run and other nearby subdivisions, those decisions paved the way for a rush of construction.

“It’s unprecedented to have so much happening all at once. It’s been really encouraging. We’re all about more rooftops. We’re really appreciative of the young families moving in,” Greenlee said. “I think one development spurs another.”

With more residents moving in and joining the tax roll, Greenlee said that growth will help expand the annual budget, fund future road repairs and infrastructure improvements in the township.

Grant Abel, Co-Owner of LookAbel Construction, is among the local developers with a significant stake in the township’s housing boom.

On average, the company is building 10 new units per year, with a mix of single family housing and duplexes.

The Blackhawk Run subdivision, by far, has seen the most rapid growth, Abel said.

During the pandemic, a challenge to overcome has been rising lumber costs due in part to high demand, limited domestic supply, shipping delays and tariffs on Canadian lumber.

“We’re seeing these lumber prices get so out of hand,” Abel said. “It’s trickling into all aspects of the bill. I just hope that we can get these materials settled down and get these timelines back on track and keep up with demand.”

Abel and his best friend, Brian Looker, who both own the company, had once worked for Looker’s father in the contracting business growing up. Abel is from Rockton, and Looker grew up in Beloit. For them, the local housing growth is rewarding to be a part of.

“Beloit is a nice little landing spot. We hope to see that continue to grow and keep up with it,” Abel said.

Beloit native Karla Clark and her daughter moved out of a smaller upstairs unit and into their brand new condo on May 7. This is Clark’s fourth time owning a home.

In her new home, Clark was able to pick everything from floors to countertops. She is curious to see what traffic will be like this fall when the new school opens down the road, but is overall excited.

Clark, who is a real estate agent in the area, said the local housing market is steadily growing. While prices on homes have been increasing amidst the pandemic as materials have been delayed and more costly, she anticipates the prices will even out by this fall.

“Growth is exciting. I think we need more new construction. That would definitely help the housing industry,” Clark said.

Beloit native Jessica Christofferson and her husband, Sean, purchased their “forever home” last year. They moved in during July of 2020, and plan to stay indefinitely. It is their third home.

They got to choose their counters, doors, paint, flooring and pick out new furniture. Due to the pandemic, some furniture was placed on back order and took longer to arrive, however they are pleased with the new digs.

“We got to make it our own. We got to enjoy seeing all of the hard work and all of the designs we made put together, and really soak it in,” Christofferson said. “We had the ability to really see it from the ground up.”

Located in the Blackhawk Run subdivision, Christofferson said the whole family is happy to see lots of other young families moving in. They have two children, ages 2 and 5.

“We really like that it’s expanding to younger families with younger children,” Christofferson said. “We’re really enjoying seeing the growth.”

Winiarski recalled how other new homeowners in the neighborhood opened up their houses to visitors, which helped them make a final decision.

And with other young families moving in all the time, Winiarski said he’s happy to see his boys outside all day with other kids their own age.

“It’s nice to see other families. We trust everybody that’s around us,” Winiarski said.