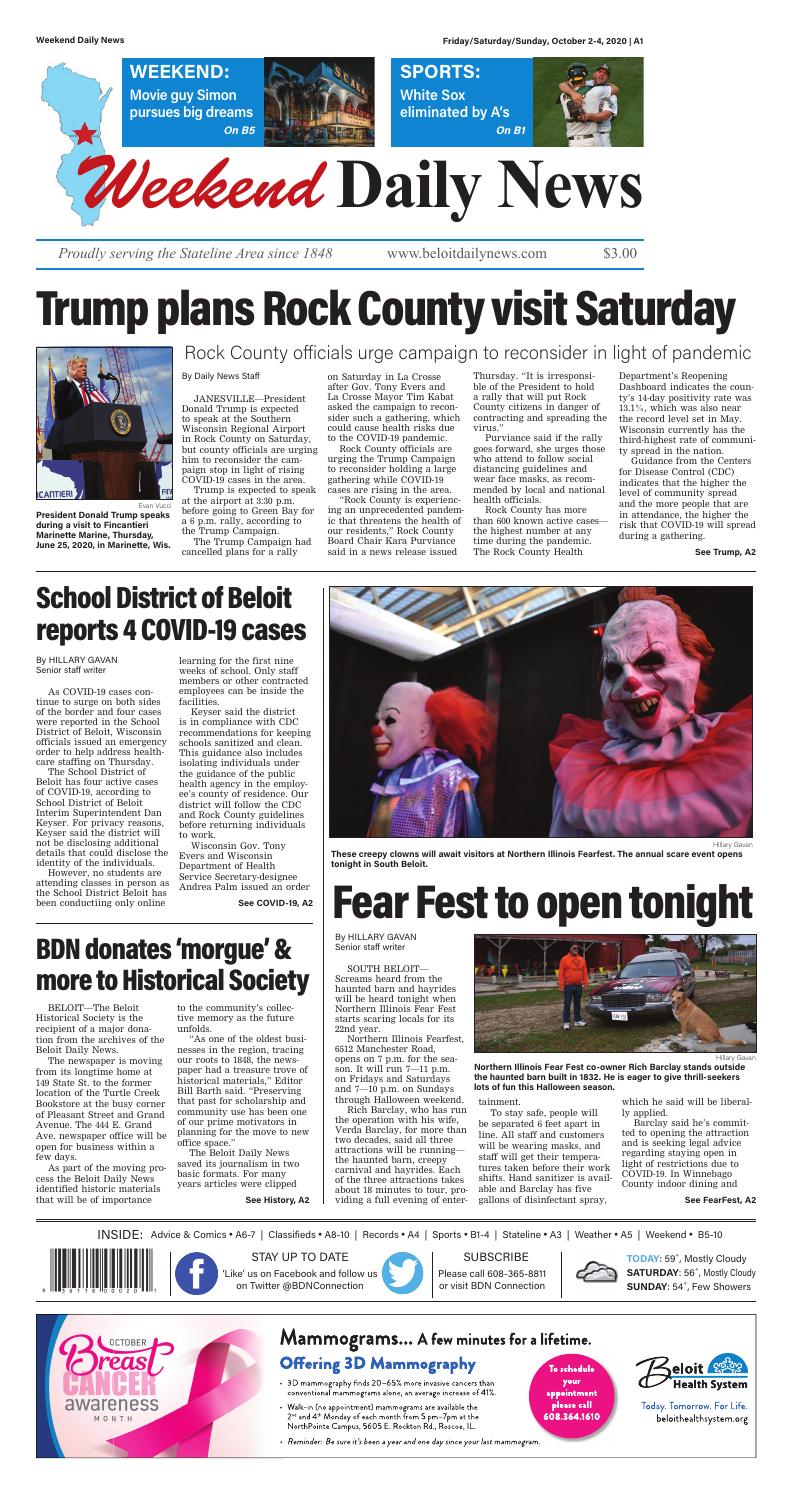 JANESVILLE—President Donald Trump is expected to speak at the Southern Wisconsin Regional Airport in Rock County on Saturday, but county officials are urging him to reconsider the campaign stop in light of rising COVID-19 cases in the area.

Trump is expected to speak at the airport at 3:30 p.m. before going to Green Bay for a 6 p.m. rally, according to the Trump Campaign.

The Trump Campaign had cancelled plans for a rally on Saturday in La Crosse after Gov. Tony Evers and La Crosse Mayor Tim Kabat asked the campaign to reconsider such a gathering, which could cause health risks due to the COVID-19 pandemic.

Rock County officials are urging the Trump Campaign to reconsider holding a large gathering while COVID-19 cases are rising in the area.

“Rock County is experiencing an unprecedented pandemic that threatens the health of our residents,” Rock County Board Chair Kara Purviance said in a news release issued Thursday. “It is irresponsible of the President to hold a rally that will put Rock County citizens in danger of contracting and spreading the virus.”

Purviance said if the rally goes forward, she urges those who attend to follow social distancing guidelines and wear face masks, as recommended by local and national health officials.

Rock County has more than 600 known active cases—the highest number at any time during the pandemic. The Rock County Health Department’s Reopening Dashboard indicates the county’s 14-day positivity rate was 13.1%, which was also near the record level set in May. Wisconsin currently has the third-highest rate of community spread in the nation.

Guidance from the Centers for Disease Control (CDC) indicates that the higher the level of community spread and the more people that are in attendance, the higher the risk that COVID-19 will spread during a gathering.

“Rock County Health Department staff, hospitals, and first responders have been working tirelessly for months to help limit the spread of the virus and put us in a position to be able to keep businesses and schools open,” said County Administrator Josh Smith. “We need to avoid any circumstances that could put our reopening in jeopardy.”

Northern Illinois Fear Fest co-owner Rich Barclay stands outside the haunted barn built in 1832. He is eager to give thrill-seekers lots of fun this Halloween season.

Northern Illinois Fear Fest has lots of scary sights in store for visitors.

SOUTH BELOIT—Screams heard from the haunted barn and hayrides will be heard tonight when Northern Illinois Fear Fest starts scaring locals for its 22nd year.

Northern Illinois Fearfest, 6512 Manchester Road, opens on 7 p.m. for the season. It will run 7—11 p.m. on Fridays and Saturdays and 7—10 p.m. on Sundays through Halloween weekend.

Rich Barclay, who has run the operation with his wife, Verda Barclay, for more than two decades, said all three attractions will be running—the haunted barn, creepy carnival and hayrides. Each of the three attractions takes about 18 minutes to tour, providing a full evening of entertainment.

To stay safe, people will be separated 6 feet apart in line. All staff and customers will be wearing masks, and staff will get their temperatures taken before their work shifts. Hand sanitizer is available and Barclay has five gallons of disinfectant spray, which he said will be liberally applied.

Barclay said he’s committed to opening the attraction and is seeking legal advice regarding staying open in light of restrictions due to COVID-19. In Winnebago County indoor dining and drinking will be prohibited as of Oct. 3.

Barclay said he passed a state Department of Labor inspection on Thursday and received his permit.

Barclay said he is willing to fight to keep his business open through the pandemic. He said he has about 10,000 followers on Facebook, and many of them want the choice to enjoy the attraction.

He said 1,000 people per night is on the high end of what his operation typically attracts. There are a total of 60 employees, but only 30 of them are working at one time throughout all three attractions and outside.

He said groups going into the haunts cannot be larger than six people per fire department regulations.

“We also spread each group apartment by two to three minutes, and there aren’t more than 16 to 18 people in the barn at one time. When they are waiting in line they are outside and spaced,” Barclay said.

Fear Fest will be as scary as ever this year, with plenty of chainsaws and clowns. A chainsaw-wielding ghoul awaits people outside of the barn, with another prowling around the hayride and people waiting in line.

“You got to have chainsaws and clowns. That’s a rule,” he said.

The barn, built in 1832, includes concrete and wooden flooring which is sometimes a bit uneven and disorienting. Barclay didn’t want to give away too many secrets, but said there are lots of movie scenes in the barn. There might also be a coffin as well as bags of faux bodies to navigate through and lots of unexpected noises and actors which pop out. A ghastly creature with a chainsaw might be outside the attraction just when one thinks they are finally done with the adventure.

The creepy carnival was added in a new building about five years ago. There is “Chucky,” and an electric chair scene in the area. “Snow” falls in a creepy holiday scene in one room and one never knows when the fog machine might start pumping.

As COVID-19 cases continue to surge on both sides of the border and four cases were reported in the School District of Beloit, Wisconsin officials issued an emergency order to help address healthcare staffing on Thursday.

However, no students are attending classes in person as the School District Beloit has been conductiing only online learning for the first nine weeks of school. Only staff members or other contracted employees can be inside the facilities.

Keyser said the district is in compliance with CDC recommendations for keeping schools sanitized and clean. This guidance also includes isolating individuals under the guidance of the public health agency in the employee’s county of residence. Our district will follow the CDC and Rock County guidelines before returning individuals to work.

Wisconsin Gov. Tony Evers and Wisconsin Department of Health Service Secretary-designee Andrea Palm issued an order providing for temporary interstate license reciprocity for healthcare providers to work in Wisconsin healthcare facilities, extending licenses that may expire during the federal emergency declaration for 30 days after its conclusion, and making it easier for healthcare providers with a recently lapsed license to apply for a reinstatement with the Department of Safety and Professional Services (DSPS). Out-of-state physicians can also practice telemedicine in Wisconsin with proper notification of DSPS.

The order is effective immediately and will remain in effect for the duration of the current declared federal public health emergency and renewals or until a superseding order is issued by Evers or Palm.

On Thursday, the Rock County Health Department reported 51 new cases of COVID-19 from the previous day and 1 additional death in Rock County, bringing the countywide total to 2,670 cases and 33 deaths.

The health department estimates 36,704 people have tested negative and 2,017 people have recovered. There were 620 active cases as of Thursday. The positivity rate was 23%.

Wisconsin reported 2,887 new cases and 21 additional deaths on Thursday, bringing the statewide total to 125,161 cases and 1,348 deaths, DHS reports. As of Thursday, 101,669 people have recovered in the state and DHS believes there are a total of 22,126 active cases in Wisconsin.

On Thursday, the Illinois Department of Public Health (IDPH) reported 2,166 new cases of coronavirus in Illinois, including 25 additional deaths. Currently, IDPH is reporting a total of 295,440 cases, including 8,696 deaths.

Donna Langford (left) and pose with just some of the items donated to the Beloit Historical Society by the Beloit Daily News prior to their move.

BELOIT—The Beloit Historical Society is the recipient of a major donation from the archives of the Beloit Daily News.

The newspaper is moving from its longtime home at 149 State St. to the former location of the Turtle Creek Bookstore at the busy corner of Pleasant Street and Grand Avenue. The 444 E. Grand Ave. newspaper office will be open for business within a few days.

As part of the moving process the Beloit Daily News identified historic materials that will be of importance to the community’s collective memory as the future unfolds.

“As one of the oldest businesses in the region, tracing our roots to 1848, the newspaper had a treasure trove of historical materials,” Editor Bill Barth said. “Preserving that past for scholarship and community use has been one of our prime motivators in planning for the move to new office space.”

The Beloit Daily News saved its journalism in two basic formats. For many years articles were clipped from print editions and stored as files in what news organizations colorfully called “the morgue.” Additionally, the newspaper purchased microfilm reproductions of printed pages from the earliest old Beloit papers through the dawning of the digital age. The donation to the Beloit Historical Society includes “the morgue” and microfilm reels from the mid-1800s through the 1920s. A microfilm reader machine also is part of the gift.

The paper also donated many years of photographs and film negatives from articles that have appeared in the pages of the Beloit Daily News.

And, with a bit of a fun twist, the paper donated its racing go-kart which was used in the downtown Grand Prix contests. Previously, the Historical Society was the recipient of the Beloit Daily News “Soapbox Derby” car, and now will have both vehicles to display.

“We are very cognizant of the fact that no organization in the community has closer ties to Stateline Area history than this newspaper,” Barth said. “The opportunity to preserve that history and make it available to the community is very gratifying to all of us.”

Donna Langford, executive director of the Beloit Historical Society, said the organization is pleased to receive the donation.

Currently closed to the public during the COVID-19 pandemic, staff and volunteers are answering research requests submitted by phone (608-365-7835) or email to info@beloithistoricalsociety.com.

“Our staff is looking forward to incorporating the Beloit Daily News donation into its future activities as we prepare for reopening,” Langford said. 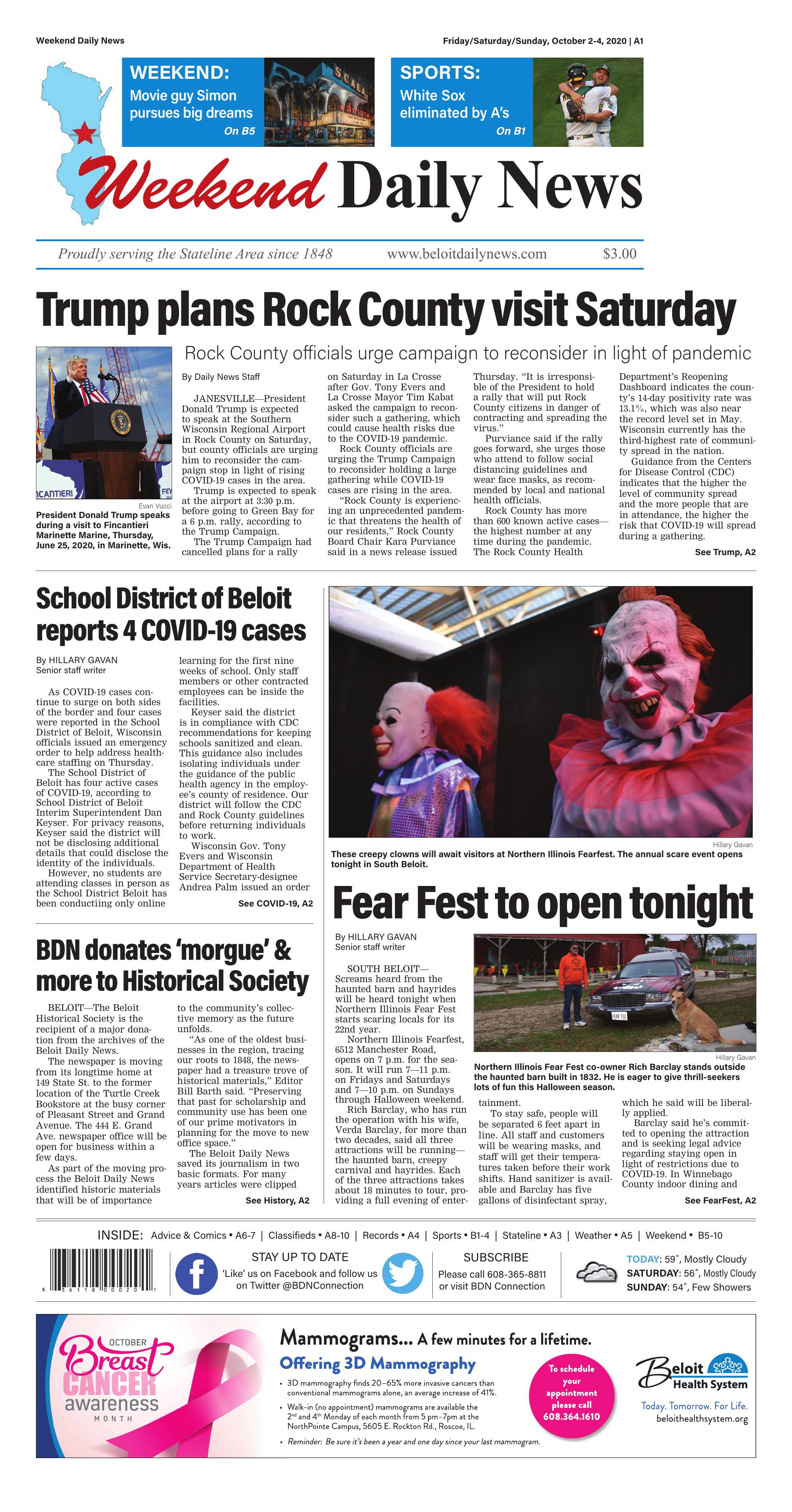