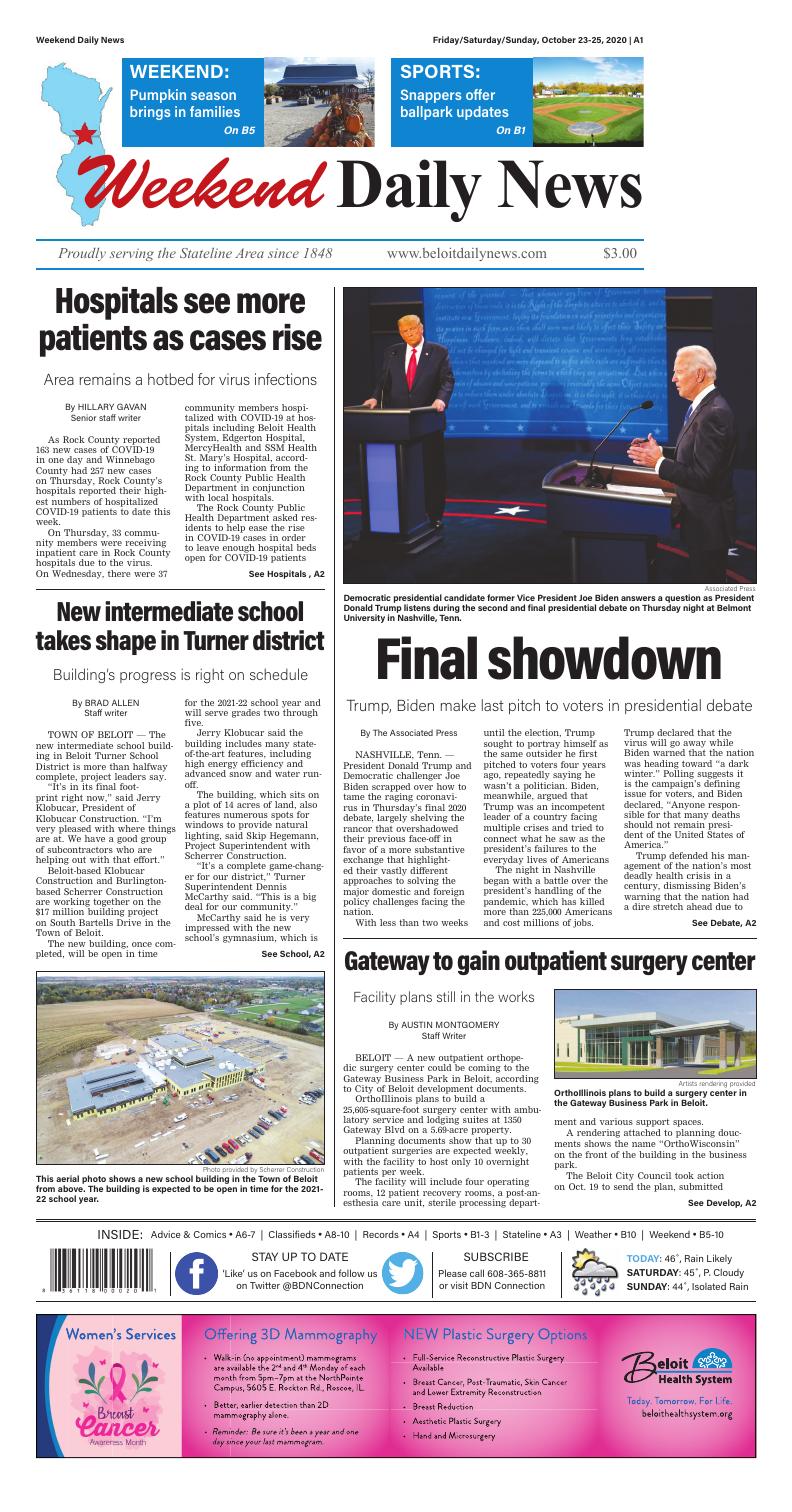 OrthoIllinois plans to build a surgery center in the Gateway Business Park in Beloit. The project remains under review by the Beloit Plan Commission and still requires Beloit City Council final approval.

BELOIT — A new outpatient orthopedic surgery center could be coming to the Gateway Business Park in Beloit, according to City of Beloit development documents.

OrthoIllinois plans to build a 25,605-square-foot surgery center with ambulatory service and lodging suites at 1350 Gateway Blvd on a 5.69-acre property.

Planning documents show that up to 30 outpatient surgeries are expected weekly, with the facility to host only 10 overnight patients per week.

A rendering attached to planning doucments shows the name “OrthoWisconsin” on the front of the building in the business park.

The Beloit City Council took action on Oct. 19 to send the plan, submitted by Anderson Mikos Architects on behalf of OrthoIllinois, to the Beloit Plan Commission for review. The city council could take action on the plan on Nov. 2.

If approved, construction could start in January and be completed by August of 2021.

As Rock County reported 163 new cases of COVID-19 in one day and Winnebago County had 257 new cases on Thursday, Rock County’s hospitals reported their highest numbers of hospitalized COVID-19 patients to date this week.

On Thursday, 33 community members were receiving inpatient care in Rock County hospitals due to the virus. On Wednesday, there were 37 community members hospitalized with COVID-19 at hospitals including Beloit Health System, Edgerton Hospital, MercyHealth and SSM Health St. Mary’s Hospital, according to information from the Rock County Public Health Department in conjunction with local hospitals.

The Rock County Public Health Department asked residents to help ease the rise in COVID-19 cases in order to leave enough hospital beds open for COVID-19 patients as well as those needing treatment for other illnesses or injuries. Although there are surge plans for each hospital, the hope is people will not have to go to alternative care sites such as the field site at the Wisconsin State Fairgrounds in Milwaukee.

COVID-19 testing was so plentiful this week the free testing site at Blackhawk Technical College (BTC) closed early after administering 900 tests over its first two days.

Testing each day was limited to 300 tests per day. Due to the high demand, the Wisconsin National Guard administered 300 more tests than planned. Community testing will resume on Wednesday, Oct. 28 at 11 a.m. For more information about community testing at BTC people can visit www.blackhawk.edu/coronavirus.

On Thursday, the Rock County Health Department reported 163 new cases of COVID-19 from the previous day and no additional deaths in Rock County, bringing the countywide total to 4,455 cases and 39 deaths.

The health department estimates 45,673 people have tested negative and 2,907 people have recovered. There were 1,509 active cases as of Monday. The positivity rate, or those whose tests were positive, was 25%.

Wisconsin reported 3,413 new cases and 22 additional deaths on Thursday, bringing the statewide total to 186,100 cases and 1,703 deaths, DHS reports. As of Thursday, 145,509 people have recovered in the state and DHS believes there are a total of 38,852 active cases in Wisconsin.

On Thursday, The Illinois Department of Public Health (IDPH) reported 4,942 new confirmed cases of coronavirus disease (COVID-19) in Illinois, including 44 additional deaths. Currently, IDPH is reporting a total of 360,159 cases, including 9,387 deaths, in 102 counties in Illinois.

This aerial photo shows a new school building in the Town of Beloit from above. The building is expected to be open in time for the 2021-22 school year.

This aerial photo shows a new school building in the Town of Beloit from above. The building is expected to be open in time for the 2021-22 school year.

The front side of a new intermediate school building is seen Wednesday in the Town of Beloit. The building will be complete in time for the 2021-22 school year.

“It’s in its final footprint right now,” said Jerry Klobucar, President of Klobucar Construction. “I’m very pleased with where things are at. We have a good group of subcontractors who are helping out with that effort.”

Beloit-based Klobucar Construction and Burlington-based Scherrer Construction are working together on the $17 million building project on South Bartells Drive in the Town of Beloit.

The new building, once completed, will be open in time for the 2021-22 school year and will serve grades two through five.

The building, which sits on a plot of 14 acres of land, also features numerous spots for windows to provide natural lighting, said Skip Hegemann, Project Superintendent with Scherrer Construction.

“It’s a complete game-changer for our district,” Turner Superintendent Dennis McCarthy said. “This is a big deal for our community.”

McCarthy said he is very impressed with the new school’s gymnasium, which is large enough to accommodate various community uses and athletic needs in the district.

Having a new school building located closer to the other district facilities than the old Townview Elementary building on the township’s west side will also significantly reduce mileage for bus routes, McCarthy said.

The gymnasium is expected to have seating for 400 people. McCarthy added it’s also possible that junior varsity high school sports teams could share that space in the future.

McCarthy said he anticipates the new building will help carry the district forward into the future and attract more families to the area.

As of Thursday, Hegemann said more than 60% of the building was enclosed, and construction crews were preparing for winter conditions. During the winter months, he said crews will shift their focus to interior design on the building and continue working to put up drywall.

Jerry Klobucar added that crews are working to install as much roofing as possible before winter, weather permitting.

The building already has temporary electricity and gas installed. Klobucar said about 35% of the building’s brick facade is also complete. The ratio of brick to metal material is roughly 70 to 30, with more material being stone bricks.

In the coming weeks, Jerry Klobucar said crews will continue to pour material for the classroom flooring in order to allow for other interior projects to move forward.

By the end of the year, Klobucar anticipates all windows for the building will be installed.

The new school building will include roughly 30 instructional spaces, a commons area, kitchens, the gymnasium and secure parking areas.

The district is close to picking a name for the new school, which is most likely to be designated as an intermediate school, McCarthy said, signifying a transitionary age group between the elementary and middle school levels.

The full Board of Education will further consider the top two names at its next meeting before making a final recommendation for the district to choose, McCarthy said. 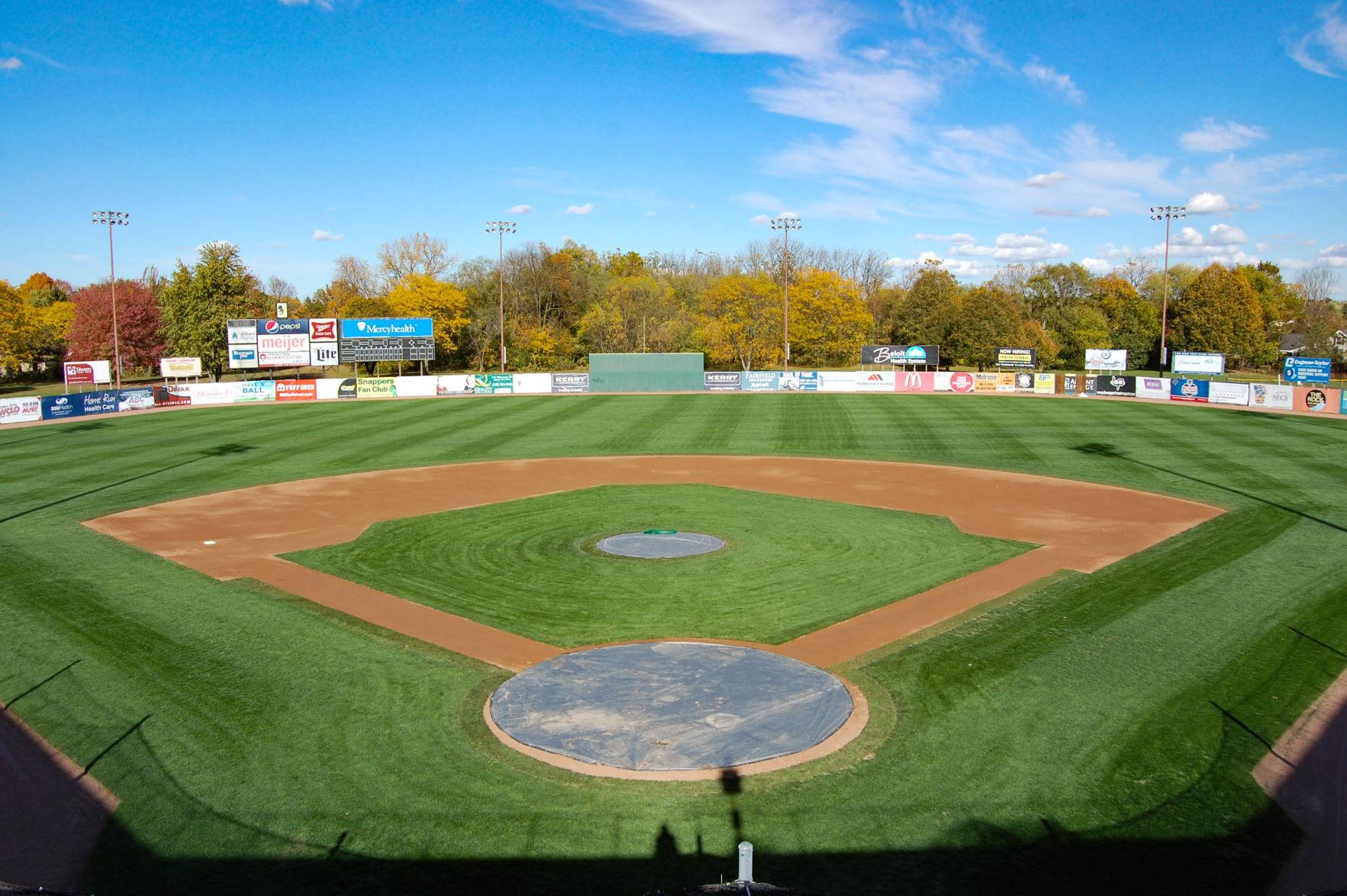 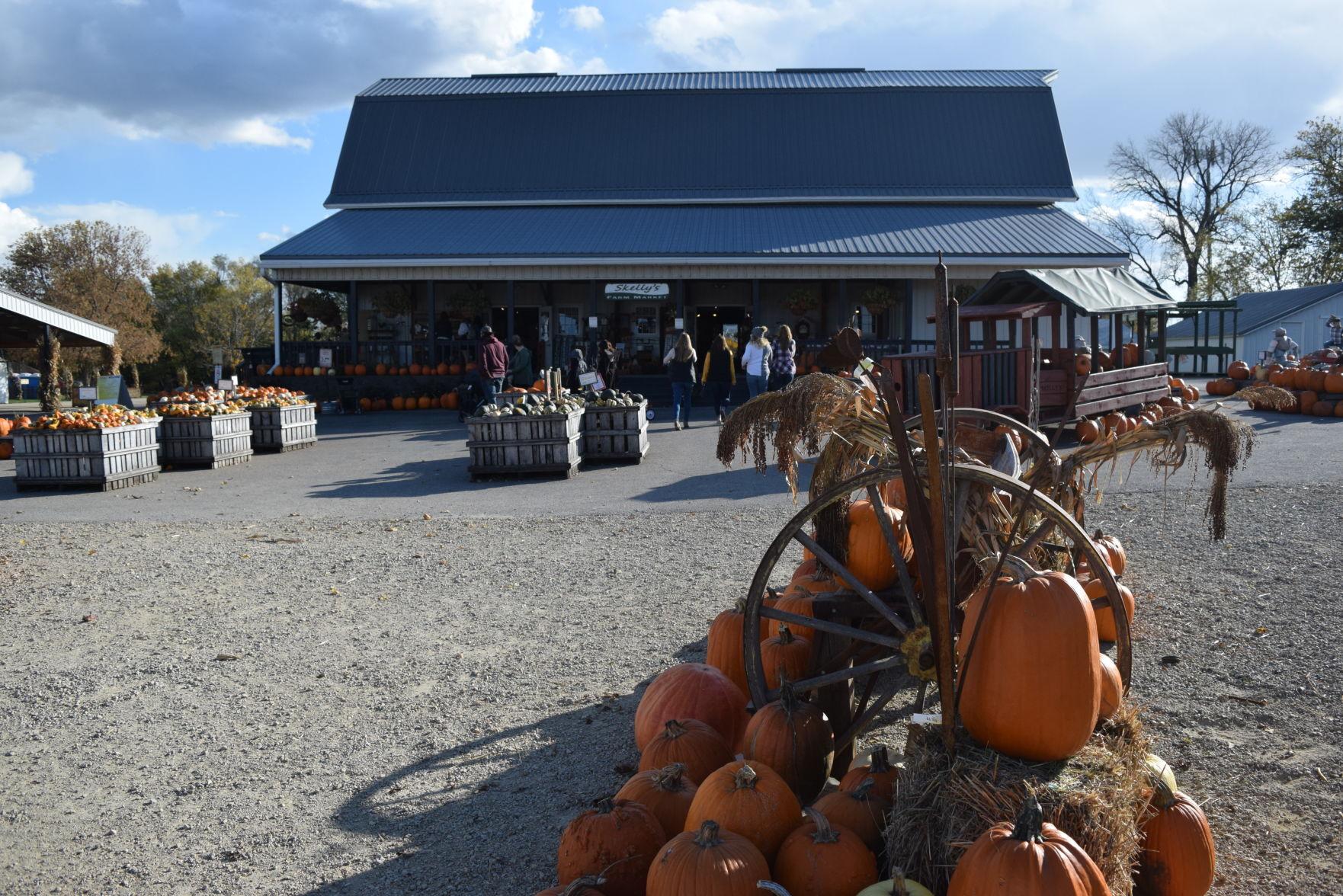 Pumpkins and other fall foods are found at the entrance to Skelly's Farm Market outside of Janesville.