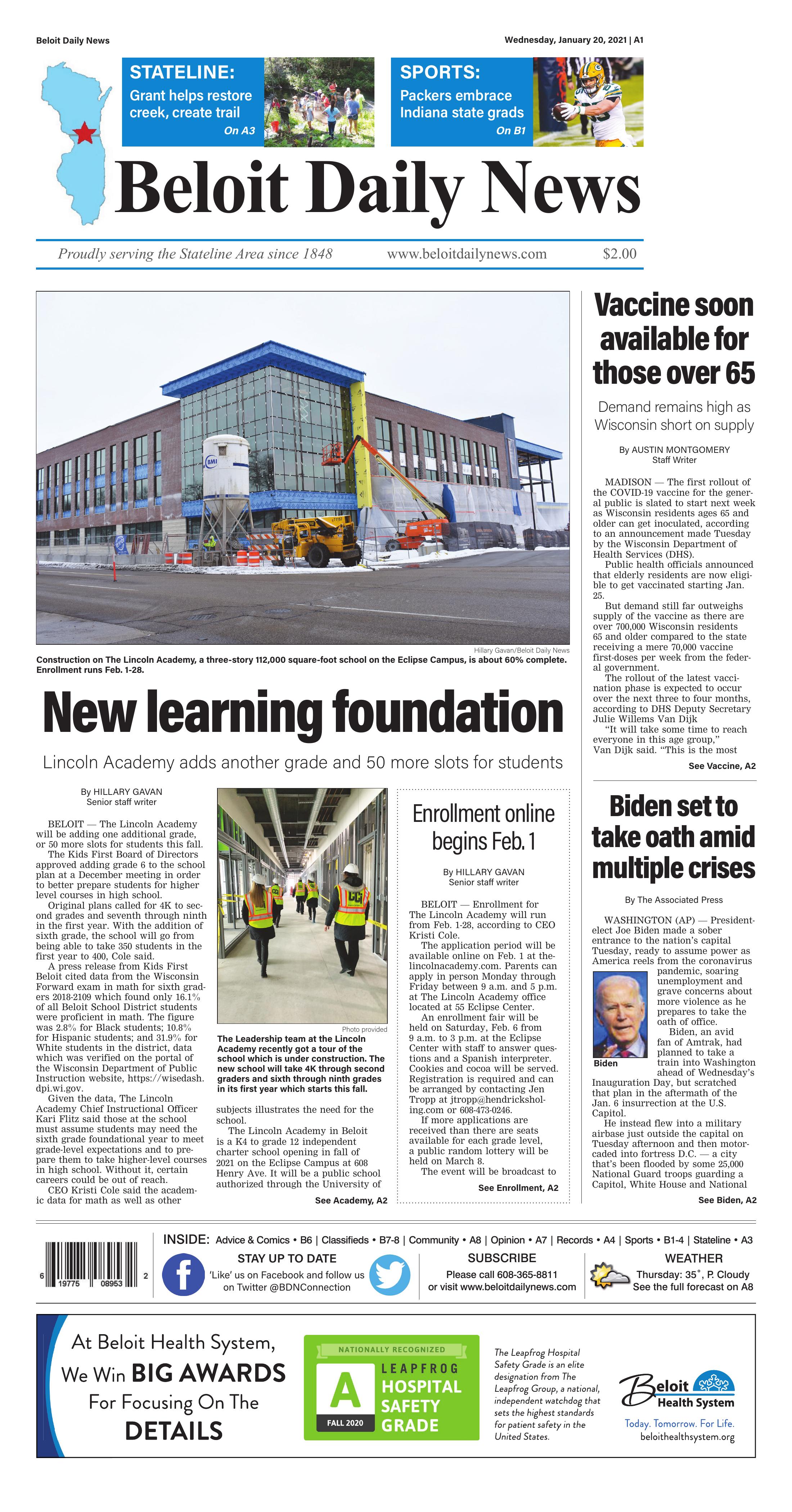 Construction on The Lincoln Academy, a three-story 112,000 square-foot school on the Eclipse Campus, is about 60% complete. Enrollment runs Feb. 1-28.

The Leadership team at the Lincoln Academy recently got a tour of the school which is under construction. The new school will take 4K through second graders and sixth through ninth grades in its first year which starts this fall.

BELOIT — The Lincoln Academy will be adding one additional grade, or 50 more slots for students this fall.

The Kids First Board of Directors approved adding grade 6 to the school plan at a December meeting in order to better prepare students for higher level courses in high school.

Original plans called for 4K to second grades and seventh through ninth in the first year. With the addition of sixth grade, the school will go from being able to take 350 students in the first year to 400, Cole said.

A press release from Kids First Beloit cited data from the Wisconsin Forward exam in math for sixth graders 2018-2109 which found only 16.1% of all Beloit School District students were proficient in math. The figure was 2.8% for Black students; 10.8% for Hispanic students; and 31.9% for White students in the district, data which was verified on the portal of the Wisconsin Department of Public Instruction website, https://wisedash.dpi.wi.gov.

Given the data, The Lincoln Academy Chief Instructional Officer Kari Flitz said those at the school must assume students may need the sixth grade foundational year to meet grade-level expectations and to prepare them to take higher-level courses in high school. Without it, certain careers could be out of reach.

CEO Kristi Cole said the academic data for math as well as other subjects illustrates the need for the school.

The Lincoln Academy in Beloit is a K4 to grade 12 independent charter school opening in fall of 2021 on the Eclipse Campus at 608 Henry Ave. It will be a public school authorized through the University of Wisconsin System and has finalized contract negotiations with the University of Wisconsin Office of Educational Opportunity. Tuition will be free to families, and enrollment is open to any Wisconsin student.

In an interview on Monday, Cole shared some of the latest updates on construction, academic and sports offerings, staffing and what the independent charter can add to the education options in the community.

Cole said construction on the building is about 60% complete.

“Several classrooms are already constructed within the facility. It’s really progressing quickly and it will be ready for occupancy in July,” she said.

Each year the school will add two additional grade levels and four additional classes, or 100 students a year until it reaches 700. When asked if the school could go beyond 700 students, Cole said it’s possible.

“It depends on growth and the desire of the community. We have to take it one step at a time,” she said.

The school is looking to hire 60 staff members the first year and has hired five as of Monday. Positions were posted online on Dec. 20.

The Lincoln Academy is applying for the Wisconsin Interscholastic Athletic Association. Sports planned to be offered include: volleyball, cross country, track and field, golf, basketball and baseball. The Lincoln Academy has not had any formal conversation with the Beloit School District regarding partnerships on sports or other activities yet but hopes to have discussions in the future.

It’s working on partnerships with the YMCA and Boys and Girls Club for activities and may consider reaching out to other smaller districts in regards to sports and activities.

Extra-curricular activities will be determined after students are enrolled and their interests are determined. Ten advanced placement classes will be offered.

When asked what the Lincoln Academy can offer the Beloit School District, Cole said those at the school would be open to sharing the practices it uses for professional development and may be able to offer the district more in the future.

“The opportunities for partnering could be endless. We are open,” Cole said.

For now, she said the school is working to establish itself and show results.

At the Lincoln Academy there will be a policy of no social promotion. It will also have a longer school day, from 8 a.m. to 4 p.m. due to a block added to the schedule for intervention and enrichment. With all the different grades in one building, Cole said there will be the potential for mentorships with older students and a family environment. Students will also wear uniforms.

As far as discipline, Cole said there will be clear consequences for specific actions. All staff, students as well as parents will have a a clear set of expectations set forth in the “commitment to success” document which is signed by a parent/guardian, teacher and student.

School board meetings will be public and posted, however there will be no public comment at meetings, according to information from Lisa Furseth, secretary to the board of directors.

Furseth added the Lincoln Academy will have a parent advisory council which will be a council of our parents of enrolled students who will be able to provide input and feedback for staff and provide updates to the board. The school’s charter contract requires a climate survey be conducted each year. 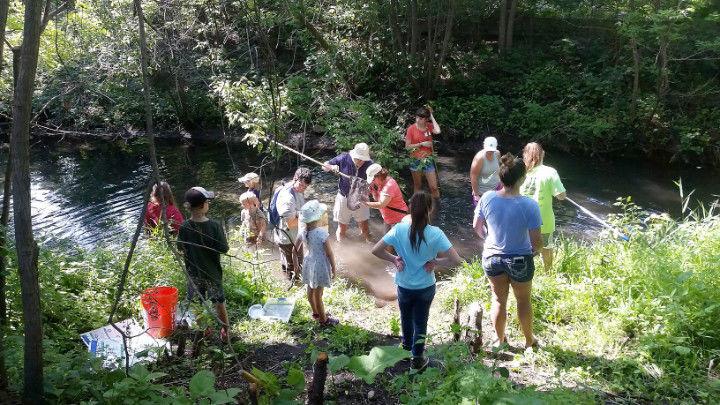 A group conducts stream studies at Nature at the Confluence. The restoration of Kelly Creek is hoped to serve as an environmental education tool for people of the Stateline Area.

MADISON — The first rollout of the COVID-19 vaccine for the general public is slated to start next week as Wisconsin residents ages 65 and older can get inoculated, according to an announcement made Tuesday by the Wisconsin Department of Health Services (DHS).

But demand still far outweighs supply of the vaccine as there are over 700,000 Wisconsin residents 65 and older compared to the state receiving a mere 70,000 vaccine first-doses per week from the federal government.

The rollout of the latest vaccination phase is expected to occur over the next three to four months, according to DHS Deputy Secretary Julie Willems Van Dijk

“It will take some time to reach everyone in this age group,” Van Dijk said. “This is the most significant public health undertaking of our lifetime. Simply put, it’s going to take us a long time unless we see more vaccines from the federal government.”

That outreach is expected to be complicated and the state expects to rely heavily on local health systems for assisting in reaching all residents over the age of 65.

Van Dijk urged residents visit the DHS website for more information, and also urging residents to sign up for the weekly vaccine newsletter that provides rolling insight on the state’s vaccination push.

For those without internet access or for those who might be less-than tech-savvy, Van Dijk said outreach would fall to key partners who work with those over 65.

“We will work closely with key stakeholders and we will be reaching out to the Association of Retired Persons, the Aging and Disability Resource Center and senior centers across our state to ensure that all residents are aware about the vaccine,” Van Dijk said.

Officials at DHS recommend that residents contact their local health care provider or health department for finding out how to get the vaccine.

In the coming weeks, Van Dijk said DHS would establish a central online portal to allow for resident registration for vaccine and all resources associated with COVID-19 immunization.

Van Dijk said DHS was informed by the federal government to expect a “stable supply” of vaccine shipments “for the next three-to-four weeks.”

“There’s nothing to indicate that we are going to have a huge new supply of vaccine anytime soon,” Van Dijk said.

Since Dec. 14, a total of 248,185 vaccine doses have been administered to Wisconsin frontline workers, including 40,545 second-vaccine doses. Mobile vaccination teams launched last week around the state to begin vaccine distribution to police and fire personnel.

BELOIT — Enrollment for The Lincoln Academy will run from Feb. 1-28, according to CEO Kristi Cole.

The application period will be available online on Feb. 1 at TheLincolnAcademyBeloit.com. Parents can apply in person Monday through Friday between 9 a.m. and 5 p.m. at The Lincoln Academy office located at 55 Eclipse Center.

An enrollment fair will be held on Saturday, Feb. 6 from 9 a.m. to 3 p.m. at the Eclipse Center with staff to answer questions and a Spanish interpreter. Cookies and cocoa will be served. Registration is required and can be arranged by contacting Jen Tropp at jtropp@hendricksholding.com or 608-473-0246.

If more applications are received than there are seats available for each grade level, a public random lottery will be held on March 8.

The event will be broadcast to the public virtually.

The Lincoln Academy will accept any student including those who are English language learners, kids with special needs or disabilities and staffing needs could be amended based upon the needs of students who are randomly selected in the lottery.

Applications will continue to be accepted on a first-come, first-served basis following the application period to fill any remaining seats or to be placed on the waiting list.

In its first year the school will accept K4 through second graders and sixth through ninth graders.

Parents who want to learn more are encouraged to visit the website at TheLincolnAcademyBeloit.com.

Cole said those at the school anticipate a waiting list, and have heard interest expressed from roughly 400 families, some of which may have multiple children.