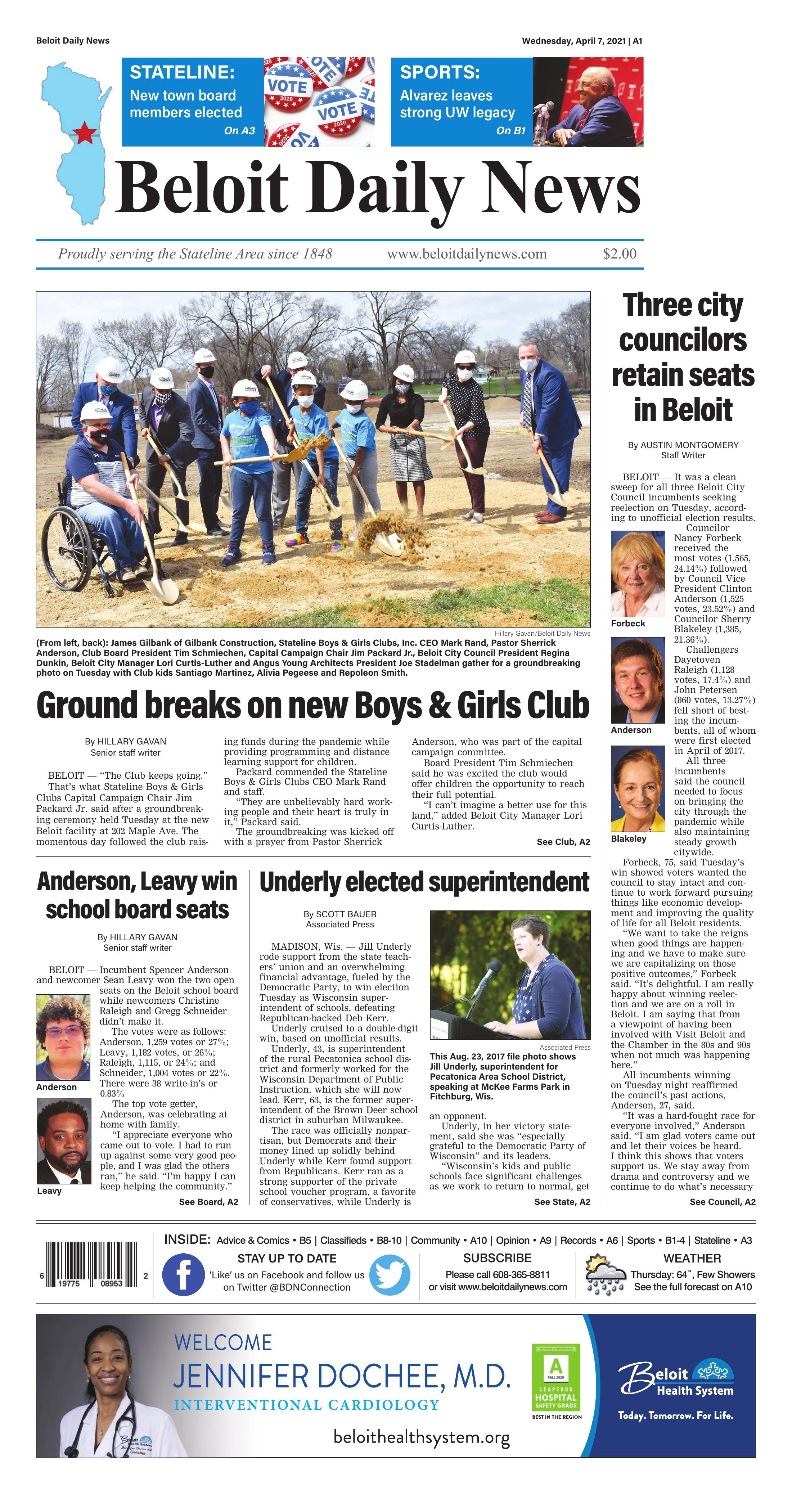 “They are unbelievably hard working people and their heart is truly in it,” Packard said.

The groundbreaking was kicked off with a prayer from Pastor Sherrick Anderson, who was part of the capital campaign committee.

Board President Tim Schmiechen said he was excited the club would offer children the opportunity to reach their full potential.

“I can’t imagine a better use for this land,” added Beloit City Manager Lori Curtis-Luther.

In August the Beloit City Council had approved the sale of land to the Stateline Boys & Girls Club for $1, according to an earlier article.

“You are safe, valued, loved and respected right here at the Boys & Girls Club,” Dunkin said to the children in attendance. “It’s a tremendous asset to the Beloit students and the entire community.”

“It’s a great day in the history of our clubs and our community,” Rand said.

Following the ceremonial turning of the dirt, attendees enjoyed lunches, water and Club T-shirt available for the crowd.

In an earlier interview Rand said he is confident in the Clubs’ ability to open the new Beloit facility in late 2021 or early 2022.

The current Beloit building is on the far west side of town at 1851 Moore St. The focus will be for the new facility to be more centrally located along the Fourth Street corridor to be closer to community partners, in particular the Beloit Memorial High School’s student population. Not only will the new site expand its reach to teens, but will be more visible and accessible as it will be located on school bus routes.

In this March 10, 2021 photo, Deb Kerr, candidate for Wisconsin State Superintendent of Public Instruction, speaks during a news conference at Walker Square Park, on South 9th Street in Milwaukee, Wis. Pecatonica Superintendent Jill Underly is facing Kerr in the race to become secretary of the state Department of Public Instruction. (Mike De Sisti/Milwaukee Journal-Sentinel via AP)

Underly cruised to a double-digit win, based on unofficial results.

The race was officially nonpartisan, but Democrats and their money lined up solidly behind Underly while Kerr found support from Republicans. Kerr ran as a strong supporter of the private school voucher program, a favorite of conservatives, while Underly is an opponent.

Underly, in her victory statement, said she was “especially grateful to the Democratic Party of Wisconsin” and its leaders.

“Wisconsin’s kids and public schools face significant challenges as we work to return to normal, get every student caught up, and support their mental health and wellbeing in the aftermath of this pandemic and the enormous trauma and disruption it’s caused for all of us,” Underly said. “Overcoming these hurdles won’t be easy, but I know that if we work together, we can get it done and do what’s right for our kids.”

Underly vowed that she will always do what’s best for students.

Underly will now have the task of leading the department at a time when schools are opening more widely as COVID-19 vaccinations increase, the GOP-controlled Legislature is debating how much money to put toward education and districts are preparing to receive $2.2 billion in federal stimulus money.

The persistent achievement gap, one of the worst in the country, remains amid more questions about the long-term impact on struggling students who were forced to take classes online the past year.

The state superintendent oversees education policy in Wisconsin, which includes dispersing grant money to schools and overseeing teacher licensing, but her power is limited and she must implement policies as enacted by the Legislature.

Underly takes over for Carolyn Stanford Taylor, who was superintendent since Tony Evers left the post midterm in 2019 after he was elected governor. Stanford Taylor declined to seek a full term. Evers had been the head of the state education department for 10 years. The seat was open for the first time in 12 years.

Outside groups backing Underly outspent Kerr’s forces nearly 4-to-1 and Underly raised $1.3 million in the last two months of the race compared with just $71,000 for Kerr. The bulk of Underly’s money, $900,000 in cash and in-kind contributions, came from the Wisconsin Democratic Party.

The top vote getter, Anderson, was celebrating at home with family.

“I appreciate everyone who came out to vote. I had to run up against some very good people, and I was glad the others ran,” he said. “I’m happy I can keep helping the community.”

Anderson plans to give stability to the board as he focuses on teacher retention and student achievement.

“I’m just glad to keep pushing the district forward and to keep bringing much needed change and, hopefully, we keep making everyone happy with the direction we are headed,” Anderson said.

Anderson, 24, is a pilot for Skydive Milwaukee. He has a bachelor’s degree in flight operations from the University of Dubuque. He has been a board member since April of 2020, worked in the school district as an instructional technology coach and is a 2014 graduate of Beloit Memorial High School.

Leavy said he wanted to thank the voters that supported his campaign by volunteering and those who made donations as well as old and new friends, family members and fraternity brothers at Omega Psi Phi. He gave a special thanks to his wife, board member Amiee Leavy.

“My wife inspired me through her own campaign and service this year,” he said.

He also said his children—Sean, 12, and daughter Madison, 10—were supportive and understanding.

Leavy said he is looking forward to working with the six other board members and Superintendent Dan Keyser as the district makes its return to in-person learning and develops a vision for student achievement and creates its strategic plan.

“I want to thank the voters and for the community for trusting me to serve in this role,” Leavy said. “Our schools have to work, and education is our way to a better life. With our faith and education, life can be different for us.”

Leavy, 43, is in his tenth year as associate principal at Central High School District of Westosha. He has also worked in the Beloit School District from 2006-2009 and in Columbus, Ohio. He coaches youth basketball at the YMCA and has attended school board meetings for the past decade. 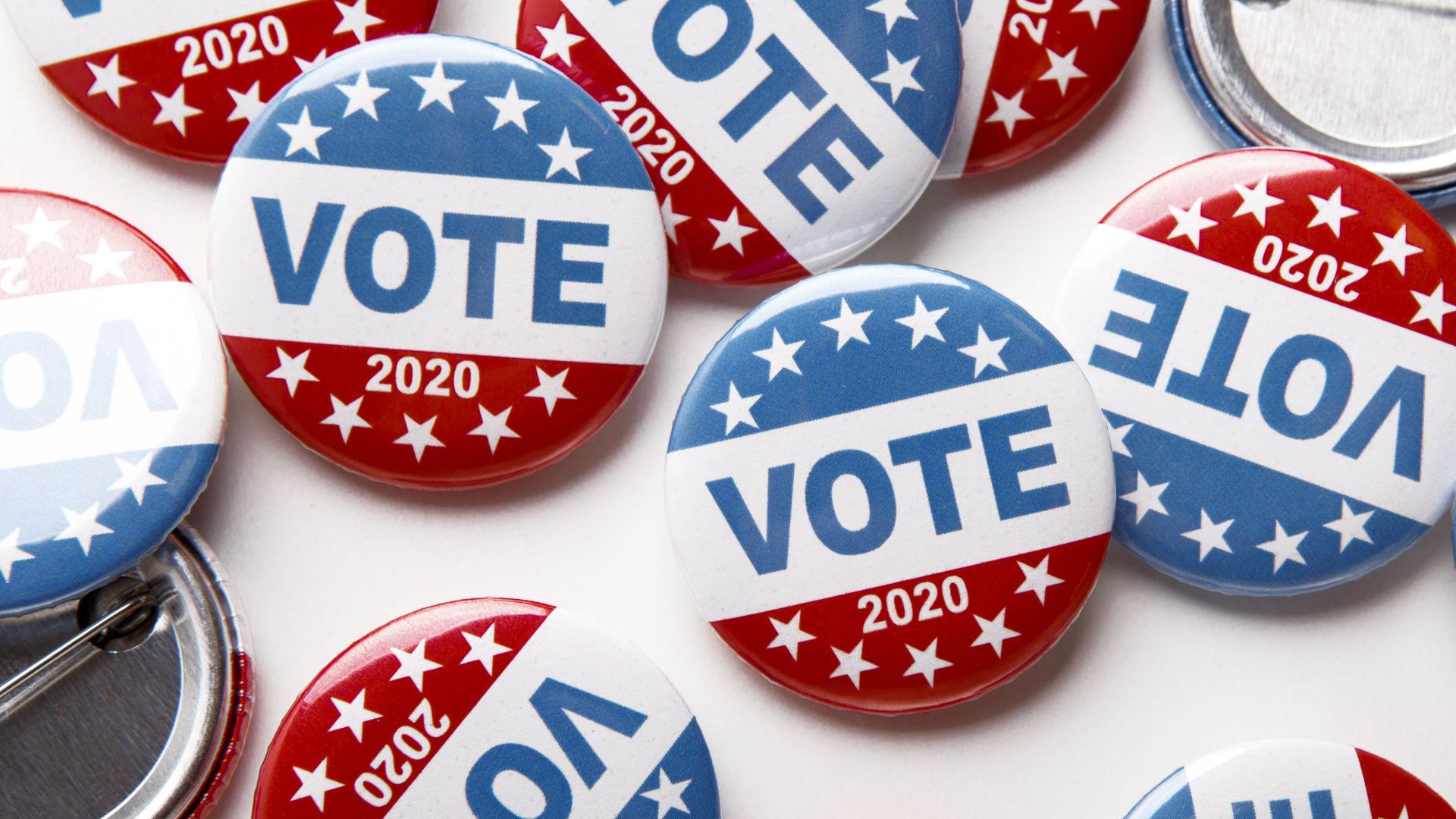 BELOIT — It was a clean sweep for all three Beloit City Council incumbents seeking reelection on Tuesday, according to unofficial election results.

All three incumbents said the council needed to focus on bringing the city through the pandemic while also maintaining steady growth citywide.

Forbeck, 75, said Tuesday’s win showed voters wanted the council to stay intact and continue to work forward pursuing things like economic development and improving the quality of life for all Beloit residents.

“We want to take the reigns when good things are happening and we have to make sure we are capitalizing on those positive outcomes,” Forbeck said. “It’s delightful. I am really happy about winning reelection and we are on a roll in Beloit. I am saying that from a viewpoint of having been involved with Visit Beloit and the Chamber in the 80s and 90s when not much was happening here.”

All incumbents winning on Tuesday night reaffirmed the council’s past actions, Anderson, 27, said.

“It was a hard-fought race for everyone involved,” Anderson said. “I am glad voters came out and let their voices be heard. I think this shows that voters support us. We stay away from drama and controversy and we continue to do what’s necessary for the people of Beloit.”

Blakeley, 67, said she was excited to see the momentum behind the current council.

“I love the work we’ve done and we have a lot more to do,” Blakeley said. “I want the city to maintain its high bond rating and I want us to do more towards promoting and supporting the city’s diversity, but most of all, we need to focus on getting through the pandemic. I am really hopeful that restrictions will be eased and we will get back to normal living.”