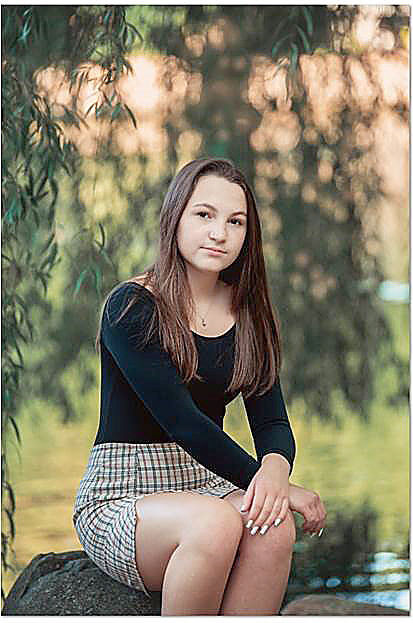 Elizabeth Heinze and Presley Hasse have been named Rotary Students of the Week at F.J. Turner High School.

Elizabeth Heinze is the daughter of Jason and Laurie Heinze.

Elizabeth has worked very hard and succeeded by being on the High Honor Roll every year. She has been a member of the National Honor Society for two years. She also earned the honor of being selected as a Beloit College Porter Scholar in her senior year. Elizabeth has been involved in AP classes throughout her high school career and by the end of her senior year she will have completed AP Biology, AP Chemistry, AP Calculus, AP Government and Politics and AP US History.

Elizabeth is involved in Choir, Student Council, Science Olympiad, Youth 2 Youth, Turner’s Acapella group-Overdrive and has participated in the school musicals. She participated in sports early in her high school years and moved to managing the Volleyball, Basketball and Track teams.

She works for Rogan Shoes. Elizabeth has participated in the Salvation Army Red Kettle program ringing the bell for donations to support local people in need and has also served Thanksgiving meals with The Overflowing Cup for several years.

Elizabeth would like to major in Nursing or Kinesiology and has narrowed her college of choice to University of WI-Oshkosh or University of Minnesota-Twin Cities.

Presley Hasse is the daughter of Bryan and Brandi Hasse.

Presley Hasse is a senior at FJ Turner High School. While maintaining high honor roll the past 4 years, Presley has also participated in year round sports, while working a part time job at Buffalo Wild Wings.

Fitness is also very important to Presley. Her love of sports from an early age has taught her many core values, including respect, responsibility, and how to maintain a healthy lifestyle whether she is in a sport, or training for her sport. She has participated in each of the mentioned sports the past 4 years at Turner High School; Volleyball, Basketball and Track and Field. Sophomore year Presley qualified for the State Tournament for High Jump. The meet at the State Qualifier, Presley earned her personal best jump of 5’3 to secure her spot at the State Tournament.

Presley volunteers yearly on Thanksgiving at the Overflowing Cup serving Thanksgiving meals to our community members.

Presley plans to attend UW—Oshkosh in the fall of 2021, with plans to major in Nursing.